Stephen Colbert endorses every candidate, Sarah Palin-style -- and it's hilarious 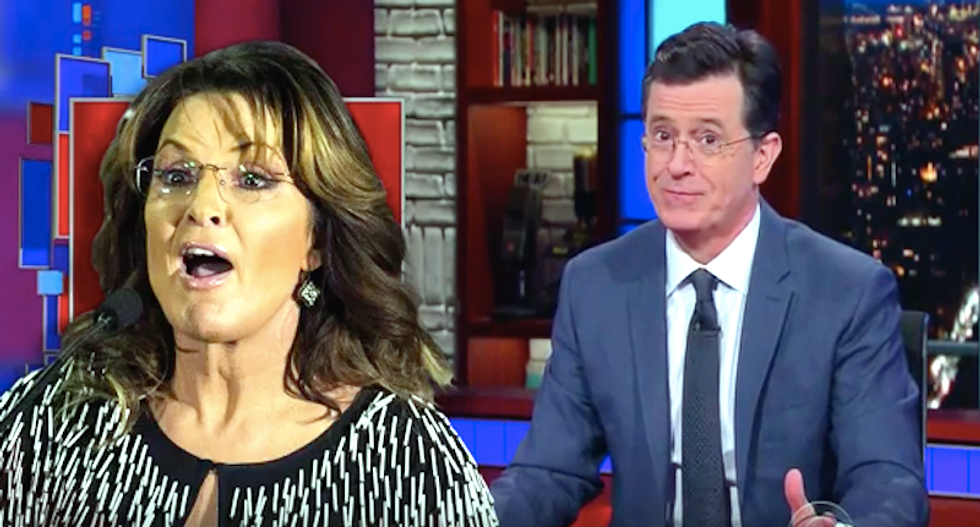 Stephen Colbert said there is no one on Earth like Donald Trump -- except for maybe one other person: Sarah Palin.

The "Late Show" host began singing Kelly Clarkson's hit, "Since U Been Gone," at the mere sight of the former half-term governor of Alaska and failed vice presidential candidate -- who endorsed Trump during a wild speech Tuesday in Iowa.

"God I have missed you," Colbert said to Palin's photo. "It's like a magical eagle made a wish on a flag pin and it came to life -- which is great for me. While Trump, admittedly, has given me so much material to make jokes about, nobody compares to the original 'material girl.'"

He played a montage of Palin revisiting some of her catchphrase "greatest hits" during the endorsement speech, and she also showed off some new prattling idioms -- and even transcended language itself at several points.

"Sarah Palin just guaranteed Trump the evangelical vote because I think she was speaking in tongues," Colbert said, blowing a kiss toward her photo. "I just wish she could endorse every candidate, because I think it would sound something like this."

Colbert said he would first use a Taser to shock the part of his brain that understands sentence structure before attempting his Palin impersonation.

He then launched into a colloquial but confusing litany of breathless endorsements of various presidential candidates, peppered with resentful attacks on the media and education, in general, and sprinkled with cheerful inklings of violence.

So, in other words, a pretty strong Sarah Palin impression.