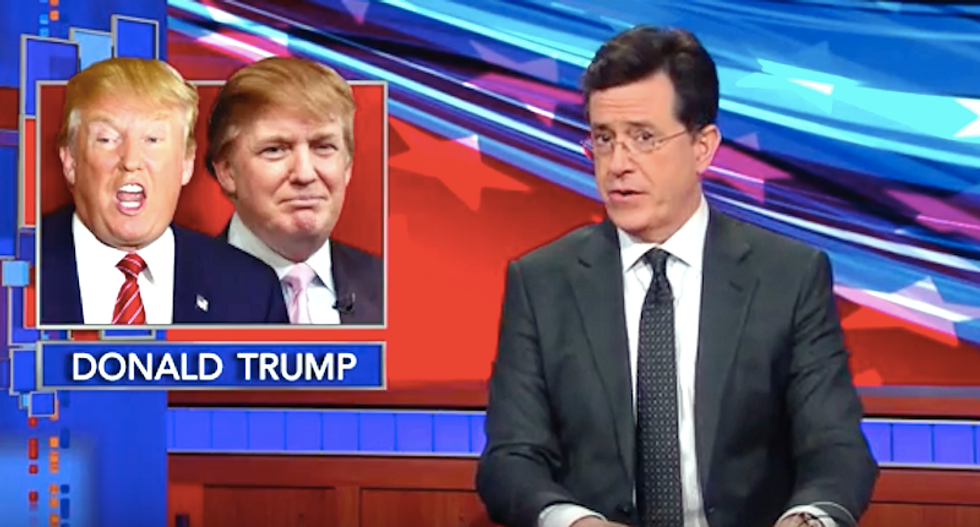 The "Late Show" host said Donald Trump, the GOP frontrunner, was "the star of this year's top reality show," so the debate just wouldn't be the same without him,

But he said the real estate tycoon and reality TV star showed weakness by backing out of the debate to protest what he sees as "unfair" treatment by Fox News anchor Megyn Kelly.

"After all, why would he want to practice going head-to-head with a strong, blonde woman?" Colbert said.

Colbert then used video footage of Trump's frequently contradictory statements for a "mano a moutho" debate.

For example, Trump said Jan. 17 that "no one likes" Ted Cruz "once they get to know him," after saying as recently as Dec. 11 that he liked the Texas senator "a lot."

Trump also said this month that he loved Iowa and its people, although he wondered during a speech in November just "how stupid are the people of Iowa?"

He described Clinton in July as the "worst Secretary of State in the history of the United States" -- although in March 2012 he described her as a "terrific woman" and friend, adding, "I think she does a good job and I like her."

Trump heaped praise on Kelly in 2011, telling her that he could never beat her skills as a debate moderator. "You have done a great job, by the way, and I mean it," he added with a smile.

This week, however, Trump said he had "zero respect" for Kelly, adding that she's not very good at her job and "highly overrated."

"Mr. Trump, in the past, when you have turned against a woman in that way -- she ends up with half your assets," Colbert cautioned the twice-divorced candidate.