Stone-age tools dating back 118,000 years discovered -- but no sign of people who made them 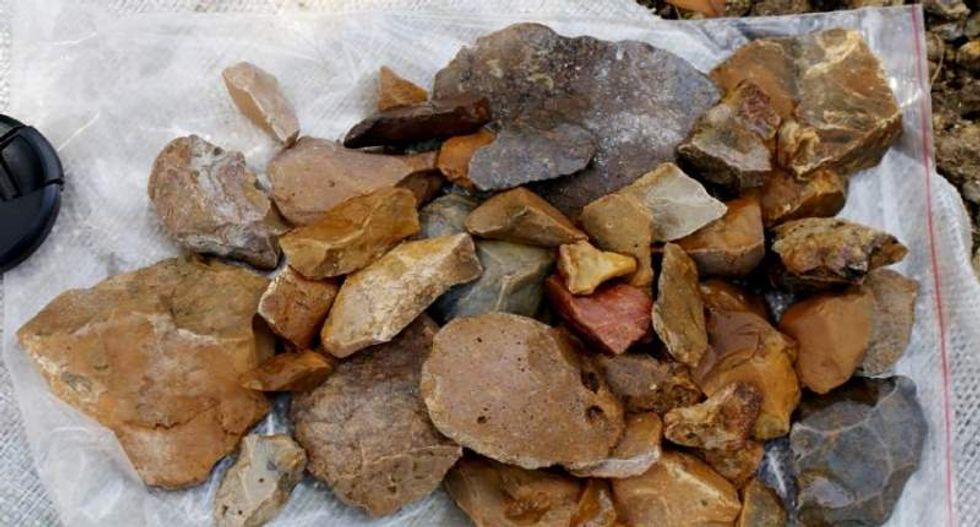 This picture received on Jan. 13, 2016 from the journal "Nature" showsstone artifacts that were found lying scattered on a gravelly surface near Talepu on the Indonesian Island of Sulawesi. (Agence France-Presse/Erick Setiabudi)

Scientists have discovered stone-age tools at least 118,000-years-old on an Indonesian island but no trace of the early humans that made them, according to a study released Wednesday.

The research, published in the journal Nature, also points to a possible link with the first peoples to arrive in Australia.

Unearthed at four separate sites on Sulawesi, the trove of several hundred implements is likely to fuel a long-simmering debate about the identity of now-extinct human species that first came to the island chain.

In 2003, fossil remains from a diminutive species of hominin -- a terms that groups extinct lineages of early man and modern humans -- was discovered in the neighbouring island of Flores.

The new find shows "that Flores was not the only island once inhabited by archaic humans before Homo sapiens" -- a.k.a. modern man -- "got there around 50,000 years ago," lead author Gerrit van den Bergh, a researcher at the University of Wollongong in Australia, told AFP.

The Hobbit, many scientists say, is a descendant of the extinct species Homo erectus that became smaller across hundreds of generations, a process called "insular dwarfing" whereby animals -- after migrating across land bridges during periods of low sea level -- wind up marooned on islands as oceans rise.

Other scientists had argued that Flores man, as it is sometimes called, might have had distinct origins, and a few had even suggested it was a tribe of modern humans suffering a genetic disorder resulting in an abnormally small skull. But both of these notions have been largely dismissed.

Whether the makers of the Sulawesi tools are also derived from H. erectus -- which lived in nearby Java at least 1.5 million years ago -- is impossible to know without fossil evidence.

But the new discovery, van den Bergh said, raises the intriguing possibility of a link with the earliest humans to populate what is today Australia.

"We know from genetic evidence that the first people coming to Australia, and their descendants, have a tiny proportion of their DNA inherited from an enigmatic group of humans called the Denisovans," he said.

Related to both human and Neanderthal lineages, Denisovans are thought to have split off from the former about 600,000 years ago, and the latter some 400,000 years later. They survived until at least 40,000 years ago.

Fossil records are so meagre -- a few teeth and a pinkie bone excavated from a cave in Siberia -- that scientists don't even know what they might have looked like.

But the DNA link with Australia's original inhabitants strongly suggests that some made their way deep into Asia.

"The genetic exchange between the ancestors of the modern Australians and Denisovans probably took place somewhere in Southeast Asia," van den Bergh said.

"It could well be that the makers of the recently dated stone tools from Sulawesi could have been these Denisovans."

Unfortunately, DNA does not survive nearly as well in tropical climes as in frigid Siberia, so the chances of finding genetic clues are diminished.

One thing that is certain, the study said, is that the tools were not made by Homo sapiens. "They are just too old for that," van den Bergh said.

The sharp-edged tools -- single- or double-faced -- were made by chipping flakes away from a piece of limestone.