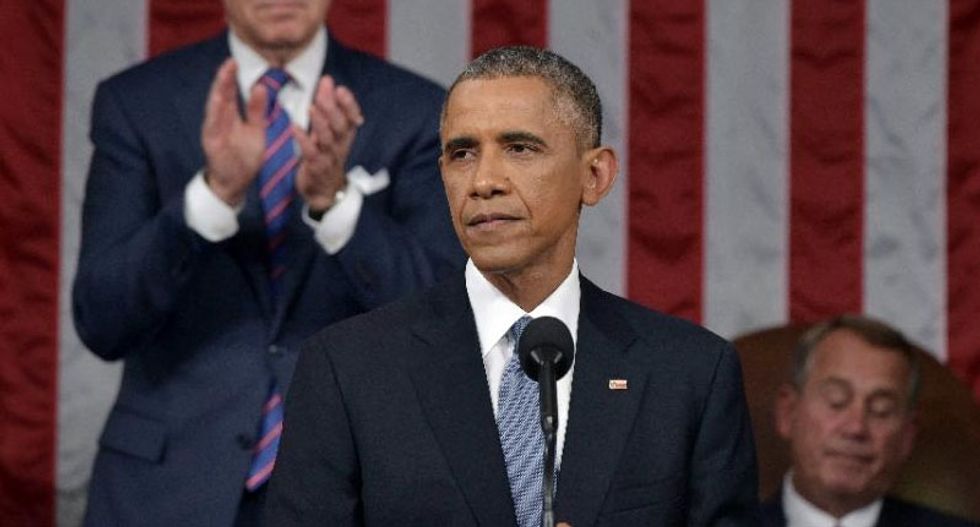 President Barack Obama delivers the State of the Union address before a joint session of Congress on January 20, 2015 at the US Capitol in Washington, DC (AFP Photo/Mandel Ngan)

A newly arrived Syrian refugee with a harrowing story and a Muslim former US soldier will be among the White House invitees at President Barack Obama's final State of the Union address on Tuesday.

The White House on Sunday announced the names of the guests invited to join Michelle Obama in the gallery of the House of Representatives when legislators, Supreme Court justices and other dignitaries assemble to hear the president lay out his chief goals for the year.

A first lady's choice of guests to the closely watched address often underlines the president's priorities, and this year is no different.

One of the guests, Refaai Hamo, arrived in Detroit only on December 18 with his surviving children -- three daughters and a son -- after spending two years in Turkey.

He had fled Syria after a missile fired by Syrian government forces destroyed the complex where he and his family lived, the White House said. Hamo's wife, one of their daughters and five other family members perished.

In Turkey, Hamo was diagnosed with stomach cancer. After being granted refugee status in the United States, he and his children are now trying to build a new life in Troy, Michigan, a Detroit suburb.

The selection of Hamo is a stinging reply from the Obamas to those Republican members of Congress who, in a preliminary vote, sought to block Syrian refugees from entering the country, for fear that terrorists might slip in among them.

Also at Michelle Obama's side will be Naveed Shah, a Muslim and former US soldier, who was a child when his parents immigrated to the country from Pakistan. Shah joined the army in 2006 and served in Iraq.

The symbolism there is also unmistakable, at a time when Donald Trump, the frontrunning Republican presidential candidate, has fanned anti-Muslim feelings among some Americans, proposing to temporarily ban all Muslims from the country.

One seat will be left vacant Tuesday in hommage to the victims of gun violence, at a time when Obama has been struggling against Republican opposition to tougher laws on gun ownership.

Jim Obergefell, whose anti-discrimination suit led to the Supreme Court ruling last year that legalized same-sex marriages nationwide, will be among the guests.

Oscar Vazquez, who arrived as a child in the United States before voluntarily returning to Mexico as a young adult and struggling to finally obtain legal status in the United States, will underline Obama's support for regularizing millions of the undocumented.

The other invitees include Sergeant Spencer Stone, who helped stop a terrorist attack on a train in France last year; Lisa Jaster, one of the first three women to graduate from the elite and arduous Ranger school of the US Army, and Satya Nadella, an Indian-born engineer who is a cricket aficionado, poet and the chief executive officer of Microsoft.