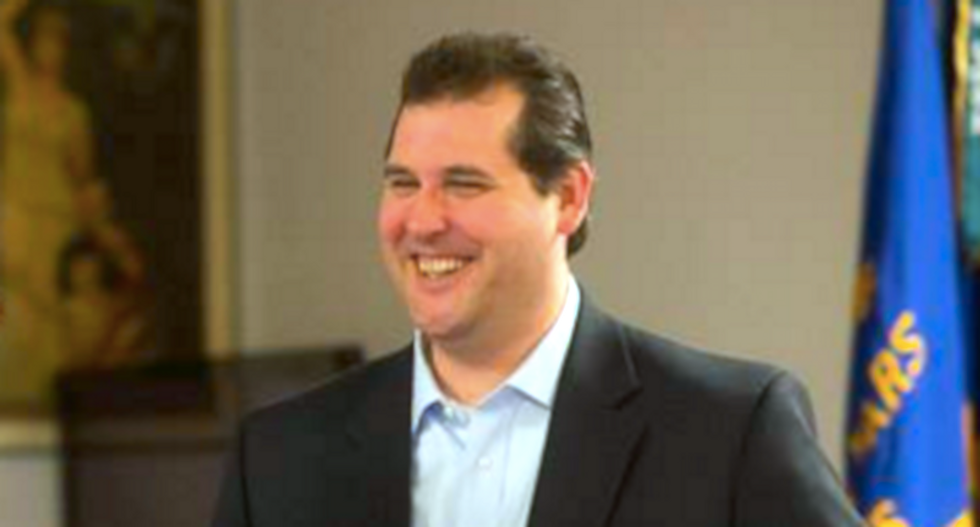 A Republican lawmaker who's serving as chairman of Sen. Ted Cruz's campaign in Washington state is either unwilling or unable to verify that he is a decorated combat veteran.

State Rep. Graham Hunt (R-Orting), who was elected in 2014 to the legislative seat to which he was appointed the year before, listed three medals on his official and campaign biographies that a military personnel center has no record of him receiving, reported The Seattle Times.

A military spokeswoman pointed out to the newspaper that the personnel center's records are sometimes incomplete -- but Hunt has been quietly deleting some details about his service record from online biographies since reporters have begun to press him for more information.

Hunt, who traveled out of state earlier this month to meet with armed militants who are occupying an Oregon wildlife refuge, says he was "wounded in combat" but has offered only vague details about what happened.

The lawmaker said he was knocked down by explosions but can't remember where, and he also claims he cannot remember which units he deployed with to Afghanistan and Iraq.

Hunt deleted a Facebook post in 2015 that showed a dramatic photo of a U.S. soldier consoling another that, according to a caption, showed the lawmaker after a 2005 mortar attack, with additional text claiming he “KNOWS THE SACRIFICE” and “STILL FIGHTING FOR OUR COUNTRY.”

"I think combat camera captured the moment pretty well," the post said. "I surely have not forgotten that moment.”

The image, however, was an Associated Press photo from 2003 that showed two Ohio soldiers -- but one of their U.S. Army insignias had been replaced with an Air Force staff sergeant patch.

Hunt later removed the post and said a campaign volunteer had posted it, but the lawmaker says he accepts "full responsibility" for the social media post.

The lawmaker deleted references last month to the Air Force Commendation Medal, the Iraq Campaign Medal and the Afghanistan Campaign Medal after the newspaper questioned him about the awards -- which military officials say do not appear on his service record.

He also stopped describing himself in the online biographies as a "combat veteran" of Iraq and Afghanistan.

The updated bio now says he served in the Air Force for nearly 10 years, “tours of duty in several countries, including multiple tours to the Middle East.” It says he has been awarded “several military honors, including the Air Force Achievement Medal.”

The 36-year-old Hunt -- who is the state chairman for Cruz's GOP presidential campaign -- said he had simply mixed up the names of awards he earned with similarly named awards he had not.

"Honestly, I don’t even care to list any honors or awards I have received, because frankly I don’t think they are that important to the public in the first place,” Hunt said, after removing details from his bio.

Hunt served in the Air National Guard from 1998 to 2005, where he was assigned to a base in Phoenix.

Military records show Hunt earned an Air Force Achievement Medal for his service in 2002 and 2003 at Prince Sultan Air Base in Saudi Arabia, where he worked as a security guard searching vehicles and local workers "in extreme heat and austere conditions."

But Air Reserve records do not indicate he was recognized for the Iraq or Afghanistan Campaign medals.

A spokeswoman for the personnel center said records may not be up to date if a veteran fails to submit documentation of medals, and Hunt said he's frustrated that he's been unable to locate paperwork that proves he was awarded the Afghanistan medal and the commendation medal.

But he declined the newspaper's request to sign a waiver that would allow greater disclosure of his military records.

Hunt insists he was sent to Afghanistan for three or four weeks in October 2001 and to Iraq around May 2003, but he cannot recall any details or supply the names of anyone he served with there.

Military records show he was deployed overseas, including support of military operations in a classified location, but there's no record he served in Iraq or Afghanistan.

The lawmaker said paperwork about his combat service, wounds and medals might be lost or misplaced at a relative's house -- but he said the verification shouldn't matter