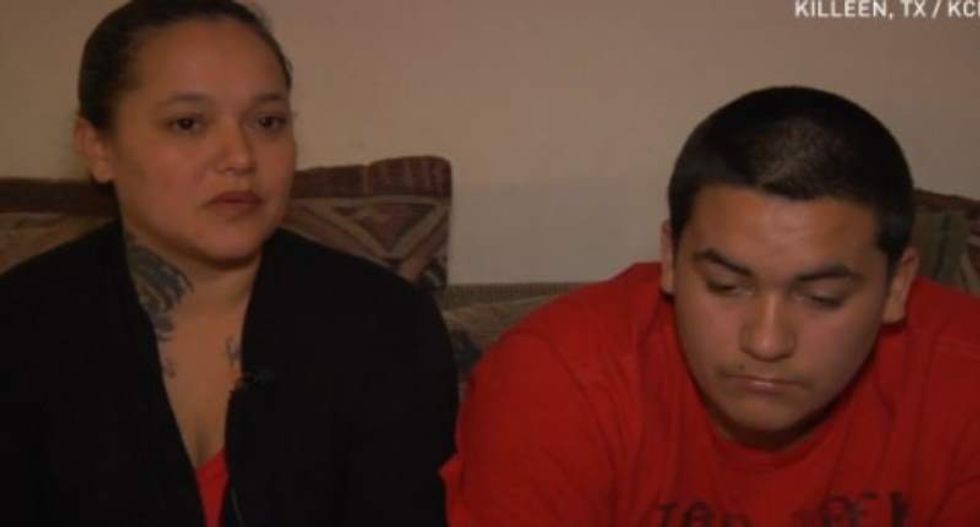 An eighth-grader in a Killeen, Texas school was suspended for two days for helping a classmate who collapsed while suffering an asthma attack, WXIA-TV reported.

"I broke rules but, she needed help," said the student, Anthony Ruelas.

Ruelas' mother, Mandy Cortes, produced a note from Ruelas' fifth-period teacher at Gateway Middle School describing the incident. According to the instructor, the unidentified girl was in class on Tuesday when she started complaining about not being able to breath, telling the teacher she was having an attack.

"As I waited for a response from the nurse the student fell out of her chair to the floor," the teacher explained. "Anthony proceeded to go over and pick her up, saying 'F*ck that we ain't got time to wait for no email from the nurse.'"

Though she did not endorse her son's language, Cortes said, she appreciated his actions. But despite already informing her about the suspension on Tuesday, she added, the school contacted her on Wednesday asking why Ruelas was not at school, forcing her to remind officials that he was barred from campus.

"Especially with it being an alternative school I feel like the kids hear enough of 'They're bad' or their behavior," she said. "And for them to not be rewarded for really something that is brave, ya know, he is a hero to me."

Officials with the Killeen Independent School District, where Gateway is located, released a statement saying they could not discuss the incident because of privacy concerns.

"The Killeen ISD maintains the safety of our students, staff and campuses as a priority and applauds the efforts of students who act in good faith to assist others in times of need," the statement read.

Watch WXIA's report, as aired on Wednesday, below.