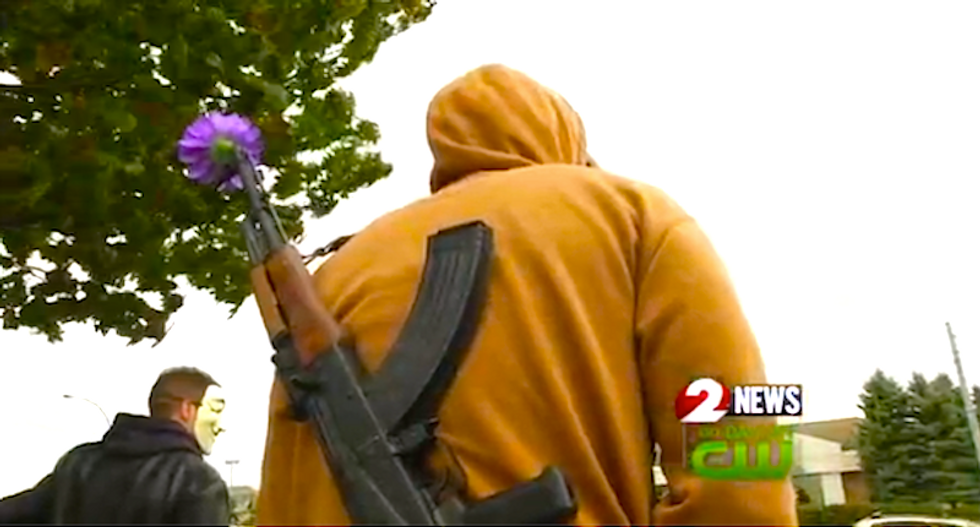 The next battle over gun rights in Texas may take place in an unlikely setting: the zoo.

A pair of new gun laws — one allowing license holders to openly carry handguns and another penalizing entities that improperly ban firearms on government-owned property — are posing a challenge for all institutions funded through private foundations but located on public property.

Zoos are walking a particular legal tightrope if they want to keep firearms off their property.

Both laws protect existing "gun-free zones," such as school campuses and courtrooms, and allow private businesses, amusement parks and educational institutions to ban weapons if they choose. While zoos, as frequent destinations for school field trips and family outings, have a strong interest in setting their own firearms policies, they often don’t fall into any of those categories.

“It’s being interpreted differently in every city,” said Tim Morrow, executive director of the San Antonio Zoo. “I think it’s really going to come down to the attorney general making a decision.”

After consulting local officials, Morrow said his zoo opted to ban visitors from openly carrying handguns, reasoning that, while it leases land from the city, it qualifies as a private business because it is managed by a separate nonprofit foundation.

“This day and age, people are just nervous. We have so many families with small children, and the small children may not understand why someone is at the zoo and walking around with guns while there’s animals,” said Morrow, who added that the zoo will continue to allow license holders to carry their handguns if they are concealed.

The Houston Zoo is one of three in the state already threatened with possible fines under the new law, which allows members of the public to report entities with potentially illegal handgun policies to Texas Attorney General Ken Paxton. Paxton’s office has received a total of 24 such complaints since the law took effect in September, said spokeswoman Cynthia Meyer, who confirmed that the Dallas and Fort Worth Zoos are also facing complaints after opting to ban open and concealed weapons.

Houston zoo officials argue that their facility was established for educational and conservation purposes, reaches more than 200,0000 children a year through its education initiatives and maintains a 17-person education department, so it qualifies as an “educational institution” under the law.

“Given the mission of the zoo and the presence of hundreds of thousands of children on its campus, it is clear that guns and zoos simply do not mix,” said spokeswoman Jackie Wallace in a prepared statement.

“That's obviously an outrageous position,” he said. “They are not regulated by Texas Education Agency, they are not part of any recognized school district or educational system, they do not issue a degree, they do not have degree plans. They are just simply a place where people go to learn things."

In Waco, the Cameron Park Zoo will allow license holders to carry handguns both concealed and openly. Because it is a city run zoo on public property, director Jim Fleshman said it would follow the city’s policies until further clarification from the attorney general.

“I would argue that we are educational facilities, so there is some leeway there,” he said.

But even if zoos can successfully argue that their programs meet the definition of educational institutions, they may still only be able to bar firearms from areas where educational instruction occurs, said Nicole Knox, a Dallas based criminal defense lawyer who represents clients who face firearms-related charges.

Knox said the clearest way for zoos to gain more control over their firearms policies may be through the amusement park exception — an argument the Dallas Zoo has pursued.

But that approach involves more than just adding a few amusement rides. An amusement park must be located in a county with a population of more than 1 million and span at least 75 acres of property.

Knox said that she expected much of the confusion to be resolved through litigation — partly because lawmakers did not appear to anticipate the challenges the laws would face when put into practice.

The history of gun rights in the state may also be a contributing factor, she said.

“Because Texas is one of the last states to pass an open carry law, I think gun rights activists are so used to insisting on, fighting for, their gun rights that they have potentially lost sight of the big picture, which is being able to carry in situations where they feel like they need to be able to carry,” she said. “I doubt that any gun rights supporters really want to be able to carry a firearm in a zoo full of small children."

By Morgan Smith, The Texas Tribune