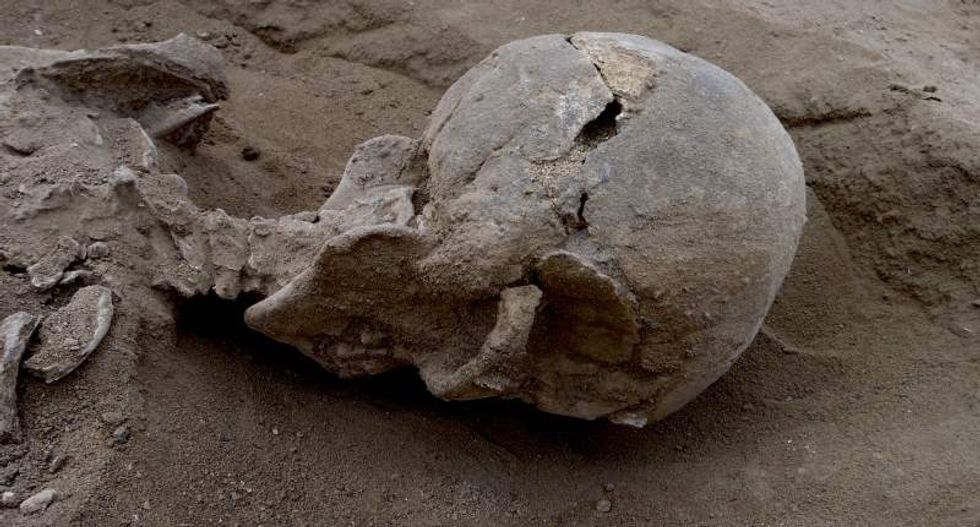 Detail of the skull of the skeleton of a man found lying prone in the sediments of a lagoon 30km west of Lake Turkana, Kenya, at a place called Nataruk, is pictured in this undated handout photo obtained by Reuters on Jan. 20, 2016. (Reuters/Marta Mirazon Lahr/Cambridge University/Handout via Reuters)

Scientists said on Wednesday they had found the oldest evidence of human warfare, fossils of a band of people massacred by a troop of attackers with weapons including arrows, clubs and stone blades on the shores of a lagoon in Kenya about 10,000 years ago.

The remains of 27 people from a Stone Age hunter-gatherer culture were unearthed at a site called Nataruk roughly 20 miles (30 km) west of Lake Turkana in northern Kenya.

One man's skeleton was found with a sharp blade made of a volcanic glass called obsidian still embedded in his skull. Another man had wounds from two blows to the head apparently with a club, crushing his skull. A woman in the last stages of pregnancy appeared to have been bound by her hands and feet.

Victims also had projectile wounds to the neck and broken skulls, hands, knees and ribs.

University of Cambridge paleoanthropologist Marta Mirazón Lahr said evidence indicates these people, who hunted animals, caught fish and gathered edible plants, were slain in a premeditated attack by raiders, perhaps from another region.

"It is a brutal, physical, lethal attack with the intention to kill those individuals who could put up a defense or mount a counter-attack, or who perhaps were of no use to them, whether it was a man or a very pregnant woman, too young or too old," Mirazón Lahr.

Our species arose 200,000 years ago in Africa. Many scholars had thought warfare first emerged long after the time of the Nataruk people when humans formed settled communities instead of a nomadic, hunter-gatherer existence.

The Nataruk fossils "raise the question of whether warfare has been part of the human experience for much longer than previously thought," Mirazón Lahr added.

A planned attack would suggest that resources the Nataruk people possessed, perhaps water, dried meat or fish, nuts or even women and children, were considered valuable, she said.

There were remains of 21 adults and six children, most under age 6. There were no older teenagers. "Whether they managed to escape, or were taken, we will never know," she said.

"At the end, all massacres are savage," Mirazón Lahr said. "How many examples do we have from our very recent, and current, history? But finding the remains of a massacre among the skeletons of hunter-gatherers of this period was totally surprising."

The research appeared in the journal Nature.