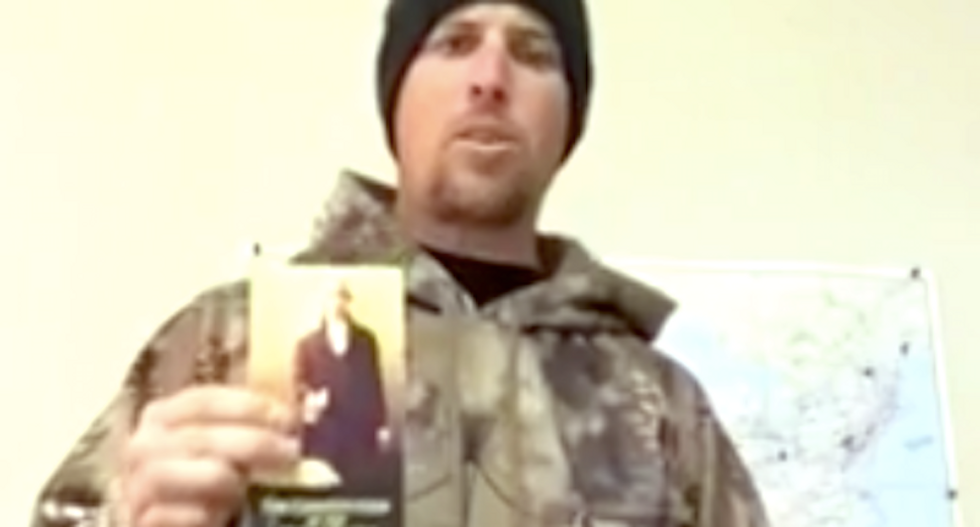 Any time the Oregon militants record a video testimonial -- and they do that a lot -- they're conspicuously displaying a pocket Constitution.

That's inspired some obvious jokes about whether they should pull out those Constitutions out of their pockets once in awhile and read them -- but that actually misses the point.

The militants do read those pocket Constitutions, but they're also reading fraudulent interpretations scribbled in the margins, so to speak, by a communist-hating conspiracy theorist promoted by Glenn Beck, reported the Los Angeles Times.

Those annotations were written decades ago by W. Cleon Skousen, an ultra-conservative Mormon and former FBI agent who believed the Founding Fathers had established a Christian theocracy and never intended for the federal government to have any authority.

Constitutional scholars, however, generally hold Skousen's theories in churlish regard.

The Pulitzer Prize-winning constitutional historian Jack Rakove, of Stanford University, said Skousen's writings were "a joke that no self-respecting scholar would think is worth a warm pitcher of spit."

Skousen, who died in 2006, both inspired and drew inspiration from the John Birch Society -- co-founded by the Koch brothers' father -- and his utopian philosophies helped spark the right-wing "Sagebrush Rebellion."

He found an even wider audience three years after his death, when Glenn Beck helped make his book, The 5,000 Year Leap, a best-seller by writing a forward for a new edition and promoting the alternate U.S. history on his CNN program at the time.

Cliven Bundy, the Nevada rancher whose sons are leading the occupation of the Malheur National Wildlife Preserve, also promoted Skousen's teachings during his own standoff with federal authorities.

“It’s something I’ve always shared with everybody and I carry it with me all the time,” said Bundy, who gets the pamphlets from a wealthy friend who buys them by the million and gives them away. “That’s where I get most of my information from. What we’re trying to do is teach the true principles of the proper form of government.”

Republican presidential candidate Ben Carson is a fan, saying that Skousen's 1958 book, The Naked Communist -- which details a leftist plot to throw the U.S. under Soviet control and shares links to the anti-Semitic Protocols of Zion -- was so timely that "you would think it was written last year.”

In fact, Carson is such an admirer that he apparently plagiarized The 5,000 Year Leap in his own book, America the Beautiful.

The National Center for Constitutional Studies, which Skousen founded in Idaho, sells copies of the annotated Constitution at 35 cents each -- and the low cost has appealed to some school districts in Florida, which were forced to apologize in 2013 after distributing them to students.

Skousen's revisionist history textbook, The Making of America, contains racial slurs and describes white plantation owners the "worst victims" of slavery -- yet it remains popular among homeschooling families and some charter schools.

Ronald Reagan was also a fan.

The former president and conservative icon said Skousen's nonprofit organization was "doing a fine public service in educating Americans about the principles of the Constitution."

Skousen was a member -- along with several officials in the Reagan administration -- of the socially conservative Council for National Policy, which was founded by end times pastor Tim LaHaye, the co-author of the Left Behind book series.

The libertarian theocrat -- who argued that "no Constitutional authority exists for the federal government to participate in charity or welfare" -- promoted a plan to privatize Social Security.

That idea gained mainstream acceptance in the Republican Party, and George W. Bush's failed attempt to do just that proved to be his political undoing even before Hurricane Katrina permanently doomed his approval ratings.

Now Skousen's teachings are inspiring a rogue band of armed militants who believe, like the Koch brothers and other industrialists, that federally owned land should be looted and pillaged without any government oversight.

Article 1, Section 8, Clause 17. We are here and trying to be as transparent as possible. We want this to end peacefully and if it doesn't then it's only because of a lack of education on the Constitution and because there were individuals who were willing to "Just do their job" like the Nazis and kill people because an evil tyrant stood behind them and pointed the finger at us. We The People are the boss. It's time for this false illusion of the government being the boss to end. God help us all if they come in here to pick a fight. Article 1, Section 8, Clause 17. The Feds are not allowed to own or manage this land. They have zero jurisdiction here. Read it people and then call your reps and demand the Feds back off.