Trump supporter goes bonkers on student in MLK shirt: ‘If you’re a Muslim you follow Satan!’ 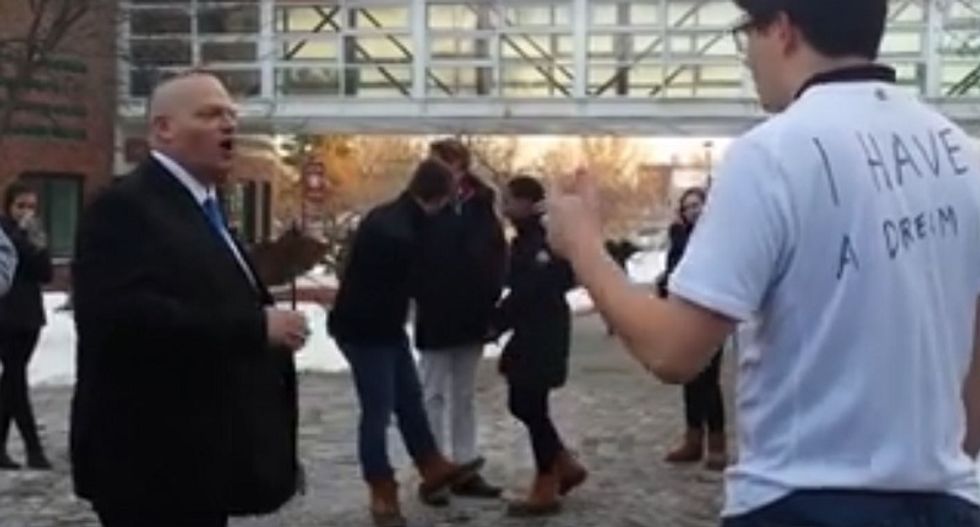 A college student had a loud confrontation with supporters of GOP front runner Donald Trump who were insisting passionately that all Muslims are murderous.

Kiernan Majerus-Collins, a student at Bates College in Maine, was kicked out of a Trump rally earlier this month for sitting quietly holding protest signs. On Monday, bystanders with cell phone cameras again caught Majerus-Collins tangling with rally-goers, according to the Hartford Courant.

The student wore a t-shirt bearing the phrase "I have a dream." In the video, he is yelled at primarily by an older man in a suit bent on the idea that all Muslims are on the verge of committing massacres.

"Let me tell you about my friends whose heads got cut off, their genitals got cut off, by Muslims who killed them!" the man hollers. "You don't know a f*cking thing! Pull your head out of your ass!"

Majerus Collins tries to reason with the man and points out most Muslims are good people, and some serve in the United States military. He also points out that most of the victims of radicalized groups are members of the Muslim community.

To no avail, because the man then says that "300 million of them out there trying to kill people."

The Trump supporter is joined by a woman who says she "just got back from Europe" and "they were stalking me and going after me."

Watch the video, as posted to Facebook by Majerus-Collins, here:

Trump Supporters' Views on IslamThis is a video showing my interaction with some of Donald J. Trump's supporters in Concord, NH yesterday.