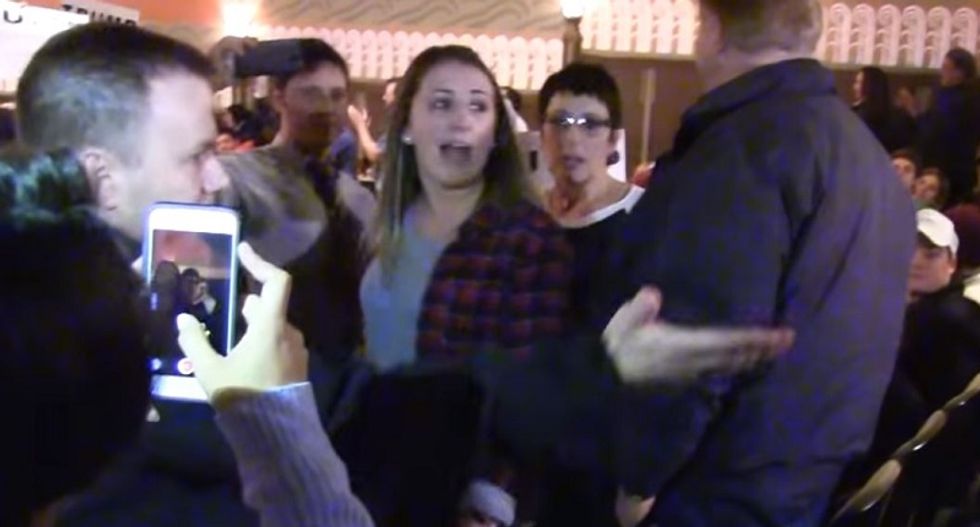 The Young Turks' Cenk Uygur accused GOP front runner Donald Trump of creating a dangerous "mob mentality" among his supporters after TYT reporter Jordan Chariton captured footage of supporters throwing people out of a rally, apparently for no reason.

The footage shows Trump supporters stand and surround a young woman who was sitting quietly at a rally in Burlington, Vermont on Tuesday. They loudly demand she be thrown out by security. As she is being forced out, the woman frantically insists she wasn't doing anything except sitting in her seat.

"If you think this isn't dangerous, you're not paying attention," Uygur cautions. "This is exactly what has happened in countries in the past... We haven't even chosen if we're going to go in this direction yet. But this is how it begins, when you start that mob and you empower that mob... This is exactly how fascism begins."

In the video shot by the TYT crew, Trump tells his supporters, "We'll get more and more angry as we go, is that okay?"

As one man is thrown out of the rally, Trump directs his security not to give him his coat, and to throw him out in 10-below weather.

"If it's joking around, I'm no longer amused," Uygur says. "This is exactly how fascism starts. You start roughing people up, and you get your own supporters to rough them up. You start taking their stuff, you start throwing them out in the cold."

Chariton then describes how he and the rest of the TYT crew were treated by Trump rally staffers. Producer Eric Byler's video shows police officers telling them they have to leave, because "they don't want you here."

Watch Uygur's commentary, followed by the entire video from the Trump rally show by TYT's crew, as posted to YouTube here and here: