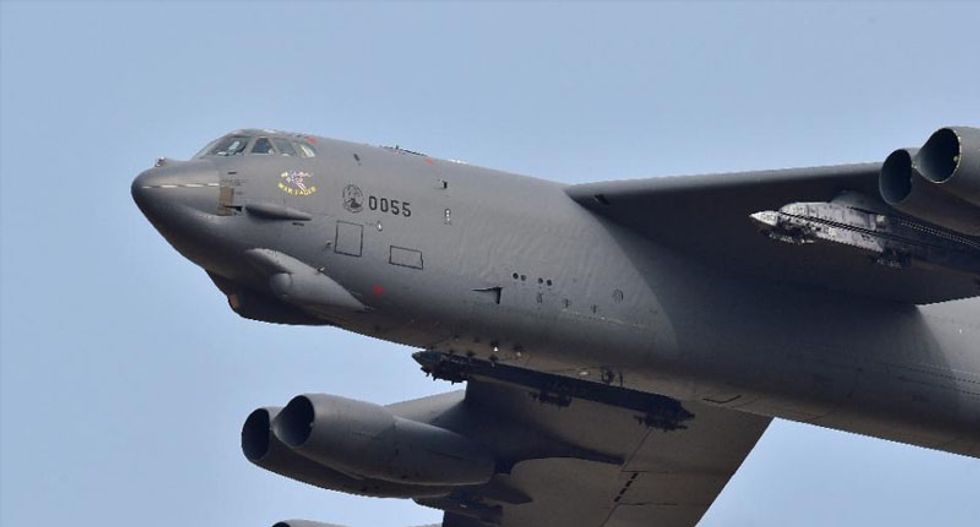 A US B-52 Stratofortress, capable of carrying nuclear weapons, flew over the Osan Air Base, some 70 kilometres (45 miles) south of the inter-Korean border (AFP Photo/Jung Yeon-Je)

The US sent a heavy bomber over South Korea on Sunday in a show of force as North Korean leader Kim Jong-Un insisted his country's latest nuclear test was carried out in self-defence.

The test on Wednesday of what the North claimed was its first hydrogen bomb has sparked international alarm and raised tensions along the inter-Korean frontier, with Seoul reviving cross-border propaganda broadcasts.

Sunday's overflight saw a B52 Stratofortress, which is capable of carrying nuclear weapons, briefly roar over the Osan Air Base, some 70 kilometres (45 miles) south of the inter-Korean border, the US military and an eye-witness said.

It was escorted by a South Korean and an American jet.

The B52 conducted a low-level flight before heading back to Andersen Air Base in Guam, where it is stationed.

The mission was conducted "in response to recent provocative action by North Korea", US Forces Korea said in a statement.

The aircraft are known to have taken part in joint annual US-South Korea military exercises that have enraged Pyongyang, but their flights over South Korea are rarely publicised.

The last time such a flight was made public was in 2013, after North Korea carried out its third nuclear test.

At that time, the US dispatched both a B52 and the more sophisticated B2 stealth bomber to South Korea in a show of military muscle against the North.

On Sunday, Pyongyang state media called for the establishment of a peace accord to stabilise the Korean Peninsula and described the nation's nuclear arsenal as a "treasured sword" that defends the country's sovereignty.

The two Koreas remain in a technical state of war because the 1950-53 war ended with an armistice, not a peace treaty.

"Gone are days never to return when the U.S. could threaten the DPRK with nuclear weapons," said ruling party newspaper Rodong Sinmun.

Wednesday's nuclear test was Pyongyang's fourth, though experts have questioned North Korea's claim of the explosion having been triggered by a hydrogen bomb.

On Friday, the North's state broadcaster also released video footage of a submarine-launched ballistic missile test, though South Korean media have suggested the footage was an edited compilation of a previous test.

Lieutenant General Terrence J. O'Shaughnessy, commander of the US 7th Air Force and Deputy Commander of the US Forces Korea, said on Sunday that the United States maintained an "ironclad" commitment to the defence of South Korea.

This commitment includes "extended deterrence provided by our conventional forces and our nuclear umbrella", he said in a statement.

"B52 missions reinforce the US commitment to the security of our allies and partners, and demonstrate one of the many alliance capabilities available for the defence" of South Korea, he said.

"As demonstrated by today's mission, the combined US and Republic of Korea air forces work and train together closely every day, and we are totally prepared to meet any threat to our alliance."

Key Resolve/Foal Eagle, one of the annual joint exercises, is expected to take place in March.

South Korea hosts 28,000 US troops as the two Koreas technically remain at war because the Korean War of 1950-53 ended in an armistice instead of a peace treaty.

Sunday's show of force came as Kim Jong-Un claimed the nuclear test was carried out in self-defence, to prevent a nuclear war with the United States.

In his first public remarks since the explosion, Kim said the test was "a self-defensive step for reliably defending the peace on the Korean Peninsula and the regional security from the danger of nuclear war caused by the US-led imperialists".

"It is the legitimate right of a sovereign state and a fair action that nobody can criticise," he added, according to the official Korean Central News Agency (KCNA).

The North regularly accuses the US and its ally South Korea of warmongering.

An official commentary published by KCNA late Friday also cited toppled leaders Saddam Hussein of Iraq and Moamer Kadhafi of Libya as examples of what happens when countries forsake their nuclear ambitions.

The nuclear test has angered world powers, including the North's key ally China, and the UN Security Council has said it will roll out new measures to punish the maverick state.