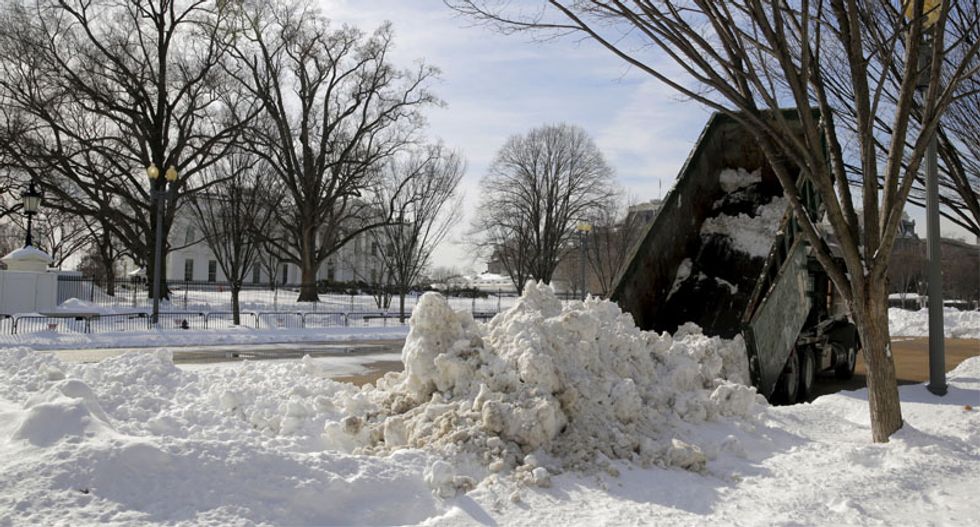 A man uses a snow blower to clear a side walk after a major winter storm swept over Washington January 25, 2016. REUTERS/Joshua Roberts

District of Columbia city government and most local governments in the Washington and Baltimore region are set to reopen after round-the-clock cleanup from the weekend snowstorm that killed at least 35 people in 10 states and the U.S. capital.

New York was largely back to normal on Monday despite near-record snowfall, with public schools and the New York Stock Exchange open.

But Washington and its sprawling Maryland and Virginia suburbs were mostly at a standstill from the blizzard that dumped more than 2 feet (60 cm) in the area.

Hundreds of thousands of federal workers stayed at home on Monday as the subway system, the second-busiest in the United States, and roads were cleared.

Federal offices will be closed again on Tuesday, but emergency and telework employees should adhere to their agencies' policies, the U.S. Office of Personnel Management said late on Monday. Federal offices closed at noon on Friday ahead of the storm.

District of Columbia Mayor Muriel Bowser told reporters that public schools would stay closed until Wednesday but city offices would open as normal.

Many school districts in the Baltimore area, which received a record 29.2 inches (74.2 cm) of snow, and in the Washington region were set to be closed on Tuesday, according to local media websites.

Washington Metropolitan Area Transit Authority General Manager Paul Wiedefeld told reporters that all rail services except the Silver Line in Virginia would run on a modified weekday schedule on Tuesday.

Bus services would expand to a "severe snow" schedule, he said. The transit system had shut down on Friday ahead of the storm and resumed limited service on Sunday with free travel.

The Federal Aviation Administration said airlines were expected to increase traffic slowly in Boston, the New York area, Philadelphia and the Washington region.

About 500 U.S. flights were canceled for Tuesday, less than a third of the number called off on Monday, according to Flightaware.com, an air travel website.

The House of Representatives has called off all votes until next week as the snow hampered lawmakers from returning from their home districts. The Senate is operating on a reduced schedule.