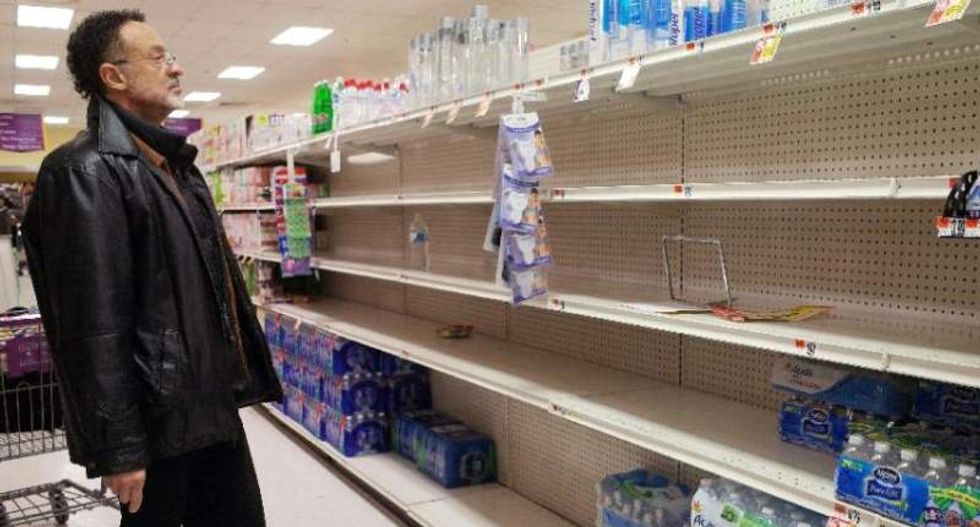 A shopper looks at the bottled water section at a supermarket on Jan. 21, 2016 ahead of an expected blizard in Washington, D.C. (Agence France-Presse/Mandel Ngan)

The tourists are nowhere to be seen, and the monuments are closed, but the supermarkets are hopping. It's an odd Friday in Washington.

As a major snow storm bears down on the US capital, residents were scurrying to buy the essentials and get home before the blizzard intensifies -- and before all public transport is shut down for the weekend.

"I think it's going to be a disaster," Sharonda Brown, a nurse, said of the blizzard as she waited for an Uber cab outside a packed Giant supermarket in the Shaw neighborhood, her cart filled with prepared foods, bottled water and wine.

"This is scary for us," said the 44-year-old, who recently moved to the area from sunny Florida.

Some shelves were conspicuously empty in the usually well-stocked store, with toilet paper, milk, bread and alcohol seemingly among the most sought-after items.

Empty shopping carts were also a hot commodity, with several patrons forced to wait for some to free up on an unusually busy weekday morning.

In another part of town, a 22-year-old fundraiser for a civil rights group, who only gave her first name Jenny, was shopping before having a few teeth pulled Friday morning -- not the easiest pre-storm ritual.

"Lots of soup, fruit juices, water. Only food you don't have to chew," she said, detailing her grocery list.

The Washington area could see more than two feet (61 centimeters) of snow accumulate in a short time from mid-Friday to Saturday, combined with fierce winds, forecasters said.

They said they would head home to hunker down for the weekend after picking up a few last fares -- federal workers whose offices were closed down at noon.

Snowflakes started falling at around 1:00 pm (1800 GMT), and the ground was quickly covered.

A Chinatown beauty salon employee, who asked not to be named, was panicked that the storm might force her to stay downtown, far from home.

"Our management just invited us to keep checking updates on the company's website and to 'be prepared.' But what the hell does that mean?" she asked.

"My last bus leaves around noon. If I can't get it, I'm going to be stranded here."

The woman, who lives in Maryland, brought a change of clothes, a toothbrush and a phone charger just in case.

About 10 staff were at the salon on Friday morning.

"They have called the clients to reschedule the appointments, but nobody cares about us," the employee said.

The shopping lists differed but many residents gave the same response about their weekend plans: stay warm, watch TV, get some rest and, if the power goes out, catch up on reading.

Most said they had to change their plans for the next three days, with some giving up on travel and meeting up with friends.

Sonia, an administrator at New York University who was visiting Washington for a teaching conference, was headed home Friday -- a day earlier than planned. She canceled her flight and was taking the train instead.

"I couldn't get stuck, I have some family obligations this weekend in New York," she said while waiting for a cab in front of her hotel.

The Big Apple was also due to get up to a foot as snow over the weekend, but Sonia said she was not worried, noting: "We get lots of snowstorms."

The tourists and homeless people usually walking the streets of the US capital were notably absent from the downtown area near the White House.

The entrance to the nearby McPherson Square metro station, where about two dozen homeless people often, only hosted a handful Friday.

"They don't care if there is snow or not. They are going to close the gates at 1 am," said one of the men, apparently unaware that closing time would come two hours sooner.

But all agreed that shelters were out of the question.

"I don't want to go in a shelter -- it's a mess there," said Keith, a West Coast transplant.