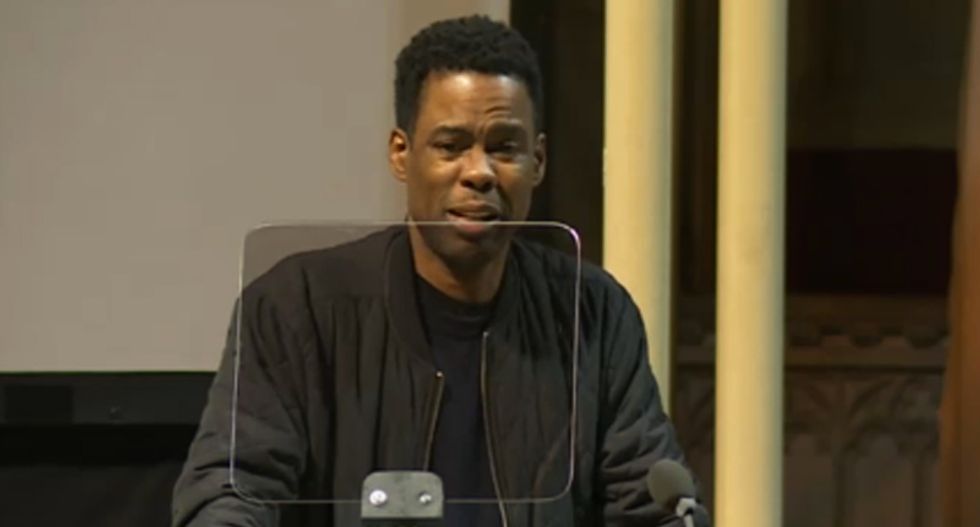 Actor and comedian Chris Rock brought down a packed house in Harlem's Riverside Church with an impassioned reading from James Baldwin as part of the day-long MLKNow celebration on Martin Luther King Day.

Rock took the stage and read from Baldwin's 1963 "My Dungeon Shook," expressing what it is like to live as a black man in white America.

"My Dungeon Shook" is a letter written to Baldwin's nephew -- also named James -- where he encourages his nephew to not give up hope.

"Well, the black man has functioned in the white man’s world as a fixed star, as an immovable pillar: and as he moves out of his place, heaven and earth are shaken to their foundations.  You, don’t be afraid.  I said that it was intended that you should perish in the ghetto, perish by never being allowed to go behind the white man’s definitions, by never being allowed to spell your proper name.  You have, and many of us have, defeated this intention; and, by a terrible law, a terrible paradox, those innocents who believed that your imprisonment made them safe are losing their grasp of reality," Baldwin wrote. "But these men are your brothers—your lost, younger brothers.  And if the word integration means anything, this is what it means: that we, with love, shall force our brothers to see themselves as they are, to cease fleeing from reality and begin to change it.  For this is your home, my friend, do not be driven from it; great men have done great things here, and will again, and we can make America what America must become."

The appearance by Rock begins at the 1:44 mark in the video below: