WATCH: Trump supporters harass Muslim woman as she is kicked out of rally 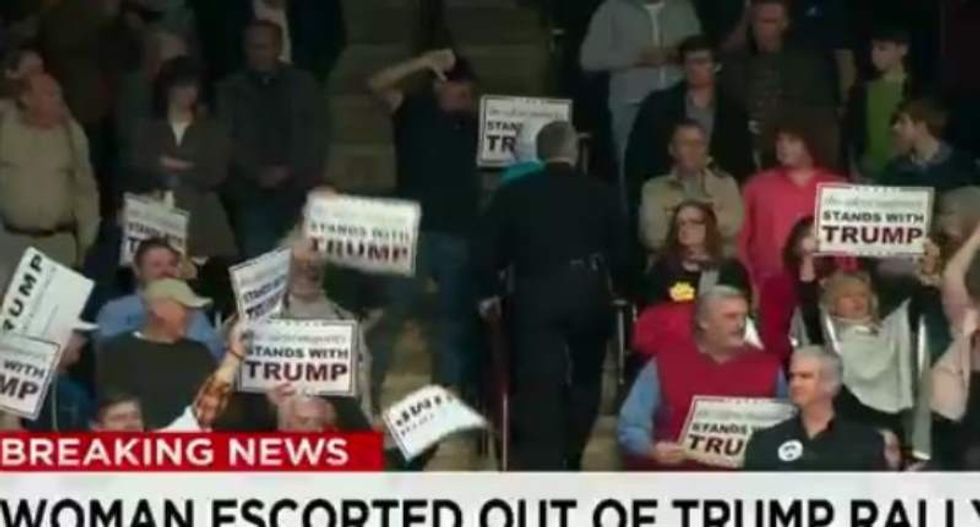 A Donald Trump supporter is seen mocking a Muslim woman as she is being led out of a rally in Rock Hill, South Carolina on Jan. 8, 2016. (CNN)

Supporters of Republican presidential candidate Donald Trump can be seen haranguing a Muslim woman as she is led out of a rally for the real estate mogul, Think Progress reported.

The video, which aired on Anderson Cooper 360, shows 56-year-old Rose Hamid standing up in the seats behind the candidate while he discussed Syrian refugees, wearing a shirt bearing the messages, "Salam" and "I come in peace."

Hamid told CNN she went to the event to show fans of the candidate "what she looked like." But the footage shows her being escorted out by security. As she makes her way out seemingly without incident, a pair of white men can be seen approaching her independently. One is seen speaking animatedly, while the other steps in front of her and begins making the "thumbs down" motion.

Earlier this week, Trump fans at a rally in Lowell, Massachusetts were caught on video attacking two silent protesters and ripping their signs up. Last month, a black protester was assaulted as one Trump supporter said, "Light that motherf*cker on fire."

Watch the footage, as aired on Friday, below.