WATCH: Woman confronts 'full of sh*t' Ben Carson over claims that people choose to be gay 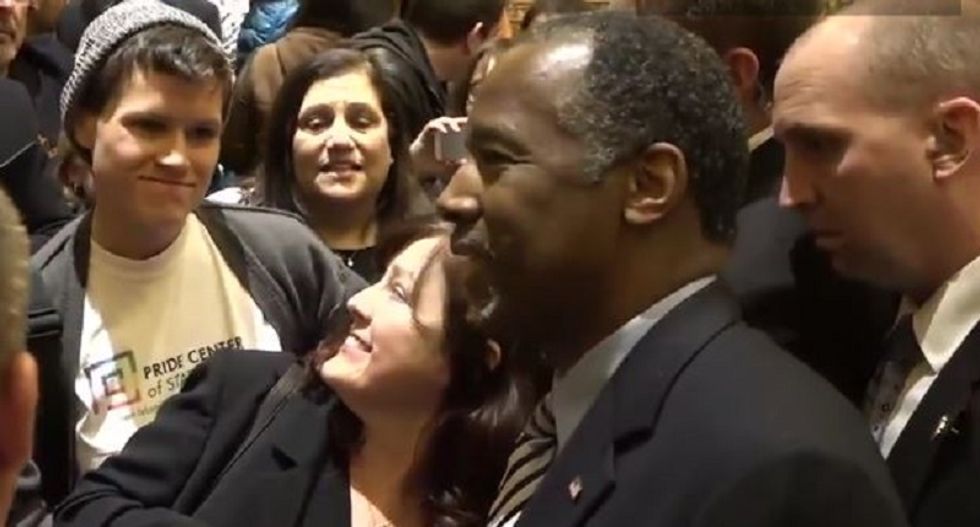 An LGBT activist confronted GOP candidate Ben Carson on Monday evening about claims Carson has made in the past that he believes gay people choose to be gay, in a video posted by ABC News.

Carson was posing for pictures at a town hall meeting in Staten Island when he was approached by a woman wearing a Pride Center of Staten Island t-shirt.

"I have a quick question," the woman said. "Do you think I chose to be gay?"

Carson then repeated her question back to her.

"Did you choose to be gay?" Then he replied, "That's a long conversation."

Actually it was a pretty short one. The woman replied, "I think you're full of shit," before turning away.

In March, Carson told CNN's Chris Cuomo that he "absolutely" believed being LGBT is a choice.

“You think being gay is a choice,” Cuomo had asked.

“Absolutely,” Carson responded. “Because a lot of people who go into prison, go into prison straight, and when they come out they’re gay. So, did something happen while they were in there? Ask yourself that question.”

Watch the interaction, as posted by ABC News, here: