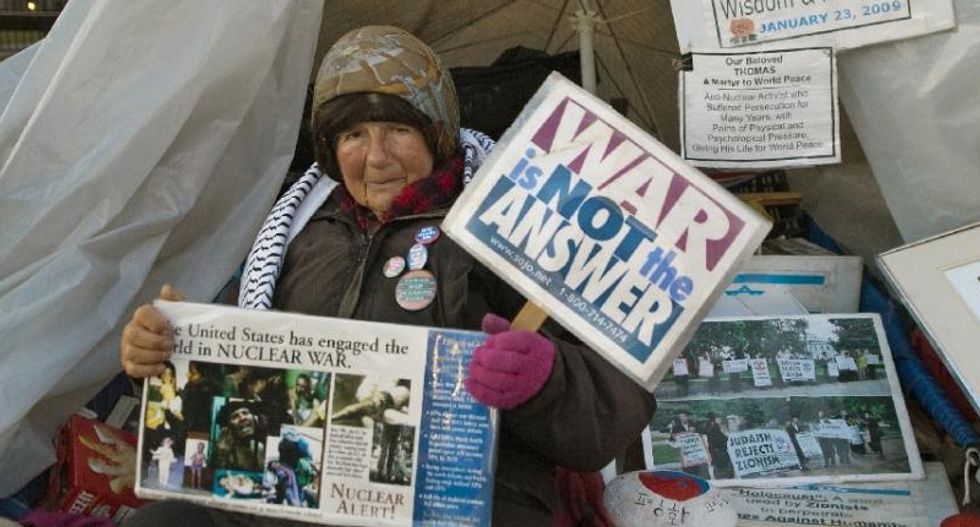 Concepcion Picciotto is seen at her daily protest in front of the White House on March 5, 2010 in Washington, DC (AFP Photo/Paul J. Richards)

Concepcion Picciotto, a 80-year-old Spanish-born nuclear disarmament activist who camped in front of the White House for more than three decades, has died, colleagues said Tuesday.

The diminutive weather-worn protester who manned a placard-festooned tent in front of 1600 Pennsylvania Avenue through Washington's brutal summers and winters since 1981 died Monday, according to The Peace House, a group she belonged to.

"Connie's health was not well for the past couple of years. Therefore, we hope she finds peace where she may be," the group said in a statement.

Picciotto was a divisive figure, earning respect for her endurance but derision for embracing sometimes controversial views.

There were also persistent questions about her mental health.

Picciotto and her colleagues were a regular attraction for tourists gathered in front of one of the world's most famous landmarks.

On Tuesday, a fellow protester manned the encampment beside a sign that read "Concepcion R.I.P." as a group of Argentine tourists clad in snow gear snapped photos.

"She manned the White House Anti-Nuclear Peace Vigil the longest," said Peace House. "She stayed there through thick and thin and was dedicated to a cause that sometimes seemed to be like an unhealthy relationship."