Why oil prices keep going down 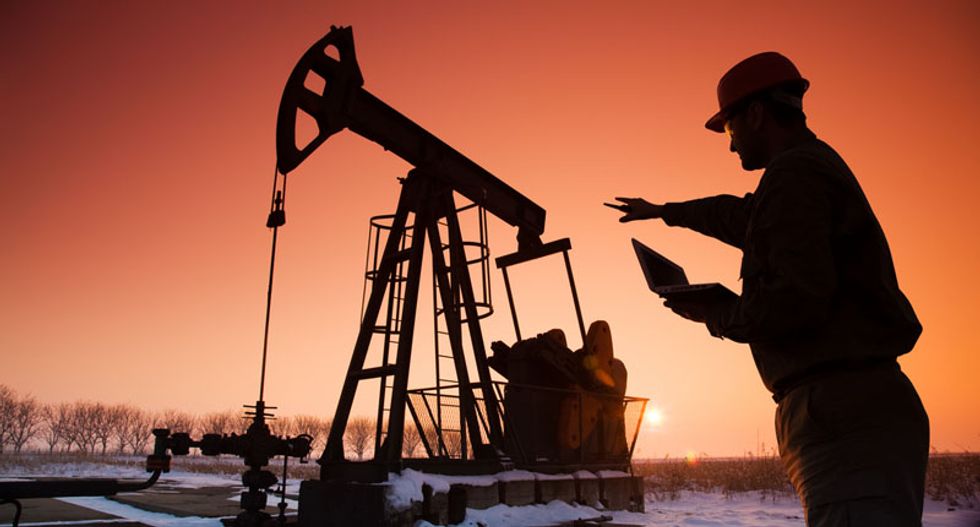 Global stock markets have been in a tailspin this week. And the sinking price of oil received at least some of the blame.

Just this week, the cost of a barrel of crude reached a 12-year-low of US$27, down from more than $100 a little more than year ago. And that may not be the end of it, according to some in the industry.

Plummeting oil prices have raised fears of a worldwide recession, even though countries are still reporting growth in jobs and income. Are there other factors driving oil prices globally?

If prices are going down, suggesting flat or falling demand, why do producers keep adding supply to the market? They should be curtailing production, according to economics 101. But the oil market doesn’t always seem to follow the rules.

In fact, even as prices have fallen, the amount of oil being pumped has actually increased. And supply is poised to rise even further, thanks to the lifting of sanctions against Iran, leading the International Energy Agency (IEA) to warn this week that markets could “drown in oversupply.”

Global oil supply averaged 96.9 million barrels a day in the fourth quarter of 2015, up from 95.4 million a year earlier. Demand, meanwhile, was almost 2 million barrels lower at 95.1 million and is expected to decline in the current quarter, even as supply is likely to increase, according to the IEA.

It’s this glut of crude oil in the global economy that has led to the sharp declines in oil prices. The additional supplies have ended up in storage tanks, because consumption has barely budged. And oil revenues of producing countries have consequently dropped very sharply, in tandem with price.

This leads to two more questions: if prices have fallen so much, why doesn’t demand increase? And if demand and revenues are down, why don’t producers just turn down the taps?

It’s actually not a surprise that demand hasn’t changed much, because oil use in the short run is determined by factors that cannot be changed quickly.

Economists look at the responsiveness of demand to price changes in relative terms and refer to this as the elasticity of demand. If a price decline of one percent, for example, leads to an increase in the volume sold of less than one percent, it means demand is not elastic. This is the case with oil consumption.

In other words, the demand for oil in the short run is not that affected by changes in price. A consumer driving a gas-guzzling SUV in excellent condition will not trade it in right away just because prices rose. Or if you are a manufacturer and your equipment is still in good condition, you cannot adjust it to use less energy or buy different machines quickly.

The inelasticity of demand also means that the total revenue the seller receives will not rise when prices fall. On the other hand, if a one percent price decline were to lead to a more than one percent increase in the volume sold, then total revenue would rise as a result of the price cut.

When prices are rising, inelasticity of demand works in the favor of the seller. An increase in price leads to a lower volume of sales but higher revenue. That is, the relative decline in volume is less than the rise in price, resulting in more money taken in by the seller.

Thus, the current situation reflects a highly competitive market and a weak response from customers in the short run. The current global rate of economic growth, the state of technology and things like the weather determine the demand for energy more than price.

At the same time, producers and individual nations keep trying to increase revenue by producing and selling even more oil. With demand inelastic, the price decline does not generate enough of an increase in sales volume to raise revenue for any seller.

Fiddling with the taps

This brings us to the other question: why don’t producers pump less oil?

If demand is inelastic in the short run, would withholding supply in hopes prices will rise lead to more revenue? It turns out that this depends on the share of global output the supplier controls.

It turns out that if a major player or cooperating group of sellers account for a share of total sales greater than the elasticity of demand, then cutting back on supply can improve its current revenue, even if sales volume declines. This is because the cutback is able to generate a price increase that is large enough.

Of course, this cutback generates even larger benefits or a “free ride” for other sellers who do not cut back. Other suppliers happily sell at the higher price. This may be one reason it is hard to get cooperation to raise the price.

Right now oil producers are not cooperating with each other as much as they have in the past, such as in the 1970s. Back then, the Organization of Petroleum Exporting Countries (OPEC) controlled more than half of the global supply of crude. When they cut production, prices rose and all its members benefited.

Today, that kind of cooperation is much less likely, as oil-producing countries don’t appear interested or even able to work together to raise prices – let alone do so unilaterally. They have varying foreign policy interests and economic structures. The biggest producer, Saudi Arabia, is even accused of purposely trying to keep prices low to run upstart American producers out of business.

And those U.S. producers, which ramped up production in recent years in large part because oil prices were above $100, still haven’t backed down, perhaps encouraged by the move by Congress to allow U.S. oil exports for the first time in four decades.

Still, the relationship between demand elasticity and percentage of market share implies that all it would take is two or three major suppliers working together to restrict supply sufficiently to raise prices by enough to increase their total revenue.

For example, Saudi Arabia and the Russian Federation each control about 10 percent of supply. If they both agreed to cut back, it would probably stop the skid in prices and improve their total revenue. It would also improve revenues of countries and producers who did not cut back.

While this would work in the current environment, producers may be thinking long-term and waiting out the lower prices in hopes of either pushing U.S. marginal suppliers into bankruptcy or reversing the trend toward fuel efficiency.

But these trends work both ways. For example, the OPEC-generated price increases in the 1970s caused changes in the energy efficiency of capital equipment in the years that followed. All sectors of the economy bought more fuel-efficient machinery and insulated structures. And this reduced demand for oil.

That is, in the long run, the price elasticity of demand is higher because consumers are more responsive to price changes. If prices go up, consumers and businesses eventually find ways to cut back. If prices are low, demand will eventually rise commensurate with the reduced cost.

Meanwhile, as long as supply continues to rise and demand remains inelastic or unresponsive, the price of oil is likely to continue its slide.