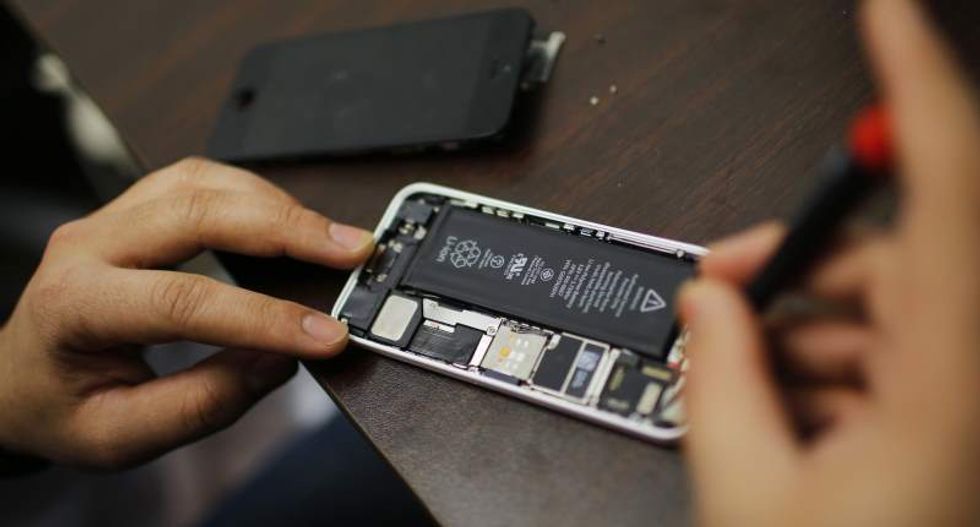 A worker tries to repair an iPhone in a repair store in New York, on Feb. 17, 2016. (Reuters/Eduardo Munoz)

Apple Inc will likely seek to invoke the United States' protections of free speech as one of its key legal arguments in trying to block an order to help unlock the encrypted iPhone of one of the San Bernardino shooters, lawyers with expertise in the subject said this week.

The tech giant and the Obama administration are on track for a major collision over computer security and encryption after a federal magistrate judge in Los Angeles handed down an order on Tuesday requiring Apple to provide specific software and technical assistance to investigators.

Apple has retained two prominent, free-speech lawyers to do battle with the government, according to court papers: Theodore Olson, who won the political-speech case Citizens United v. Federal Election Commission in 2010, and Theodore Boutrous, who frequently represents media organizations.

Government lawyers from the U.S. Justice Department have defended their request in court papers by citing various authorities, such as a 1977 U.S. Supreme Court ruling that upheld an order compelling a telephone company to provide assistance with setting up a device to record telephone numbers.

The high court said then that the All Writs Act, a law from 1789, authorized the order, and the scope of that ruling is expected to be a main target of Apple when it files a response in court by early next week.

But Apple will likely also broaden its challenge to include the First Amendment's guarantee of speech rights, according to lawyers who are not involved in the dispute but who are following it.

Compared with other countries, the United States has a strong guarantee of speech rights even for corporations, and at least one court has ruled that computer code is a form of speech, although that ruling was later voided.

Apple could argue that being required to create and provide specific computer code amounts to unlawful compelled speech, said Riana Pfefferkorn, a cryptography fellow at Stanford University's Center for Internet and Society.

The order against Apple is novel because it compels the company to create a new forensic tool to use, not just turn over information in Apple's possession, Pfefferkorn said. "I think there is a significant First Amendment concern," she said.

A spokesman for the U.S. Attorney's Office in Los Angeles declined to comment on the possible free-speech questions on Thursday.

A speech-rights argument from Apple, though, could be met with skepticism by the courts because computer code has become ubiquitous and underpins much of the U.S. economy.

"That is an argument of enormous breadth," said Stuart Benjamin, a Duke University law professor who writes about the First Amendment. He said Apple would need to show that the computer code conveyed a "substantive message."

In a case brought by a mathematician against U.S. export controls, a three-judge panel of the 9th U.S. Circuit Court of Appeals, which covers California, found in 1999 that the source code behind encryption software is protected speech. The opinion was later withdrawn so the full court could rehear the case, but that rehearing was canceled and the appeal declared moot after the government revised its export controls.

The FBI and prosecutors are seeking Apple's assistance to read the data on an iPhone 5C that had been used by Rizwan Farook, who along with his wife, Tashfeen Malik, carried out the San Bernardino shootings that killed 14 people and wounded 22 others at a holiday party.

U.S. prosecutors were smart to pick the mass shooting as a test case for an encryption fight with tech companies, said Michael Froomkin, a University of Miami law professor. That is because the shooting had a large emotional impact while also demonstrating the danger posed by armed militants, he said.

In addition, the iPhone in dispute was owned not by Farook but by his employer, a local government, which has consented to the search of the iPhone. The federal magistrate who issued the order, Sheri Pym, is also a former federal prosecutor.

"This is one of the worst set of facts possible for Apple. That's why the government picked this case," Froomkin said.

Froomkin added, though, that the fight was enormously important for the company because of the possibility that a new forensic tool could be easily used on other phones and the damage that could be done to Apple's global brand if it cannot withstand government demands on privacy. "All these demands make their phones less attractive to users," he said.

(Reporting by David Ingram and Alison Frankel in New York, and Dan Levine in San Francisco; Editing by Jonathan Weber and Lisa Shumaker)