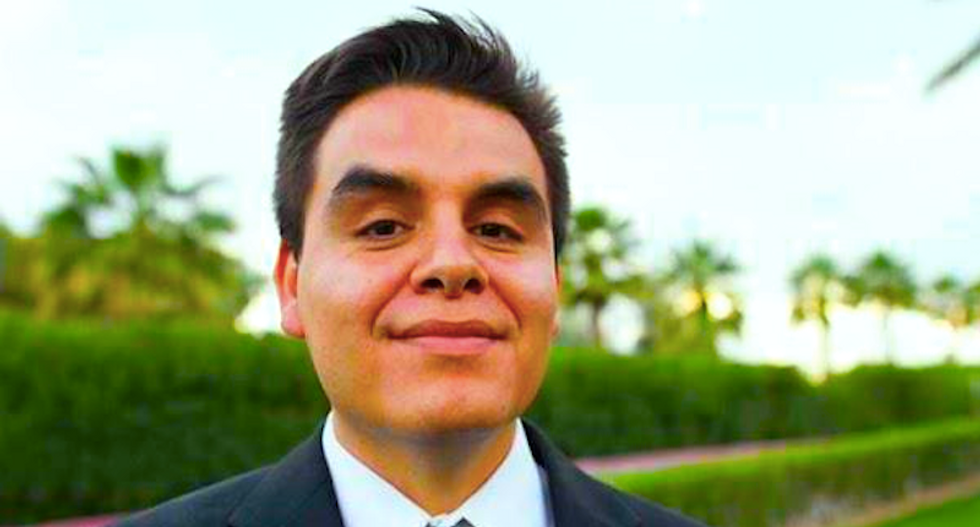 An Arizona Democrat said his Republican colleagues won't let him deliver an invocation before a meeting of the state House of Representatives.

State Rep. Juan Mendez (D-Tempe) angered some lawmakers three years ago, when he took his turn delivering the invocation that opens every session and is rotated among legislators, reported the Arizona Capitol Times.

His invocation outraged some religious conservatives because he asked them not to bow their heads in prayer but instead reflect on “this extraordinary experience of being alive.”

House Majority Leader Steve Montenegro (R-Litchfield Park) was so infuriated that he issued a memo last month, after Mendez asked to deliver another invocation, stating that House rules require sessions to begin with a prayer that specifically refers to a higher power.

“Prayer, as commonly understood and in the long-honored tradition of the Arizona House of Representatives, is a solemn request for guidance and help from God,” Montenegro wrote.

He said even a moment of silence failed to meet that required standard to be considered a proper prayer.

Mendez, an atheist, asked in early January to deliver the invocation Monday, when the Secular Coalition of Arizona would be visiting the Capitol -- but his request was denied.

Instead, a Christian minister offered a prayer that specifically referenced God and Jesus Christ.

Mendez, however, offered a secular invocation during a period set aside for personal comments -- and he reminded lawmakers that non-religious people can do good deeds without an expectation of eternal reward.

“We need not tomorrow’s promise of reward to do good deeds today,” Mendez said.

The House Majority Leader declined to comment on his policy, but his press aide insisted the prayer limitations were legal because the U.S. Supreme Court has ruled that prayers, by definition, require a reference to a higher power.

“I’m a Christian man and believe that prayer has to be of God,” Gowan said. “The Lord is near and dear to my heart, so when I do my prayers, it’s to God.”

The newspaper pointed out the policy was implemented before the Phoenix City Council voted to eliminate prayers to open their meetings after attorneys found they could not legally exclude the Satanic Temple from offering an invocation.