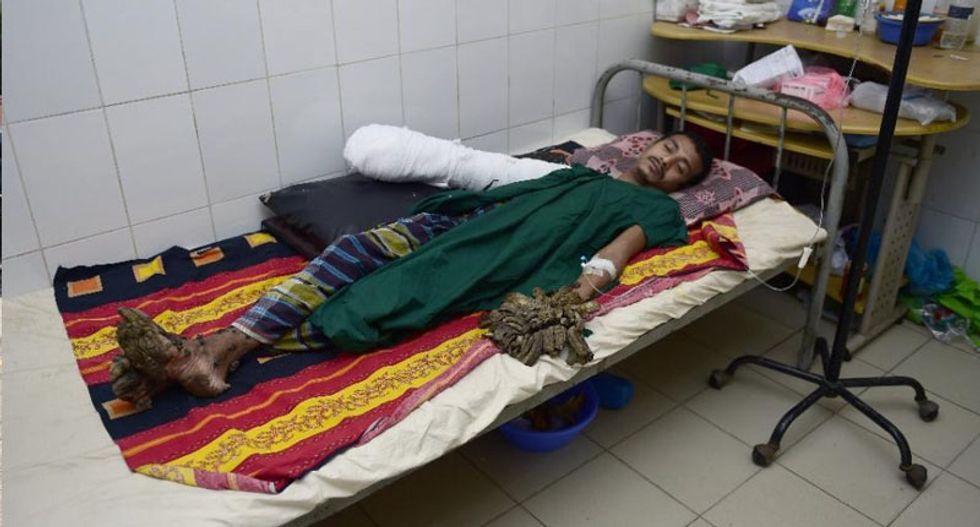 A Bangladeshi father dubbed "Tree Man" for massive bark-like warts on his hands and feet may need a dozen more operations to remove the growths, a hospital director said Sunday.

A team of doctors operated on Saturday on Abul Bajandar's right hand to remove some of the smaller growths, his second such operation, said Dhaka Medical College Hospital facility director Samanta Lal Sen.

The 26-year-old was admitted to hospital last month to finally shed some of the growths weighing at least five kilograms (11 pounds) that first began appearing 10 years ago.

"We removed some small warts from his palm. We also did dressing of his fingers, which were operated on last week. He's now better," Sen told AFP.

But Bajandar would need up to 15 operations in total to rid his body of the growths, which may take six months to one year, Sen said.

Bajandar, from the southern district of Khulna, was diagnosed with epidermodysplasia verruciformis, an extremely rare genetic condition dubbed "tree-man disease" that causes the growths.

He has become a celebrity, with people travelling to Khulna over the years to see him and hundreds visiting him in hospital.

Bajandar said he was determined to continue with the treatment no matter how long it took.

"The first operation has given me hope," he told AFP by phone from hospital.

"I don't want to return to my village without clearing my hands and feet. I want to get back to my old life," the father-of-one said.

Bajandar was given the all-clear for surgery after tests confirmed the warts were not cancerous. He opted to have the surgery now after the Bangladesh government decided to pay the bill.

Bajandar initially thought the warts were harmless but slowly as the growths covered his hands and feet, he was forced to quit working as a bicycle rickshaw puller.

Sen said only three known cases of epidermodysplasia verruciformis existed in the world.

An Indonesian villager with massive warts all over his body underwent a string of operations in 2008 to remove them.