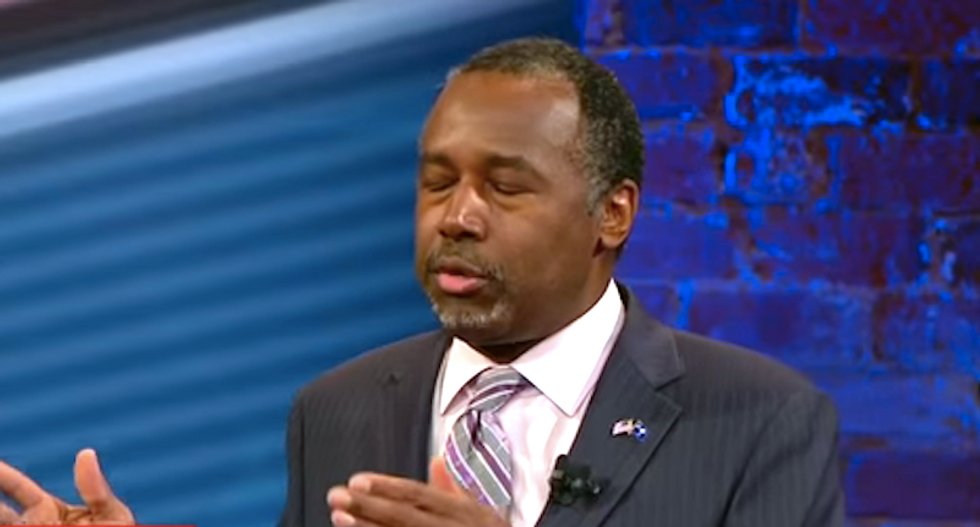 The Republican presidential candidate was asked Wednesday night during a town hall event in South Carolina, where he hopes to revive his moribund campaign, what overarching "big idea" he would promote as president.

"I have multiple big ideas," Carson said, launching into a muddled meditation on human capital.

"We have only 330 million people," he said. "Sounds like a lot of people, but China has 1.4 billion people, India has 1.1 billion people. We have to compete with them on the world stage, which means we can’t afford to waste any of our people. So it doesn’t make sense for us to have 20-plus percent of people who enter high school dropping out of high school in the technological age, in the information age. It makes no sense for us to have 5 percent of the world’s population and 25 percent of the inmates."

Carson then suggested a wish to reduce crime, but offered nothing even remotely specific, and conjured a link between criminality and social welfare programs.

"We have to reorient ourselves in a way that we keep those things from happening, because for every one of those young people we can keep from going down that path of self-destruction that’s one more person that we don’t have to be afraid of or protect our family from," Carson said. "One more person we don’t have to pay for in the penal system or welfare system. One more taxpaying, productive member of society who may discover the cure for cancer or a new energy source. We can’t afford to throw away any of our people. That’s the big idea."