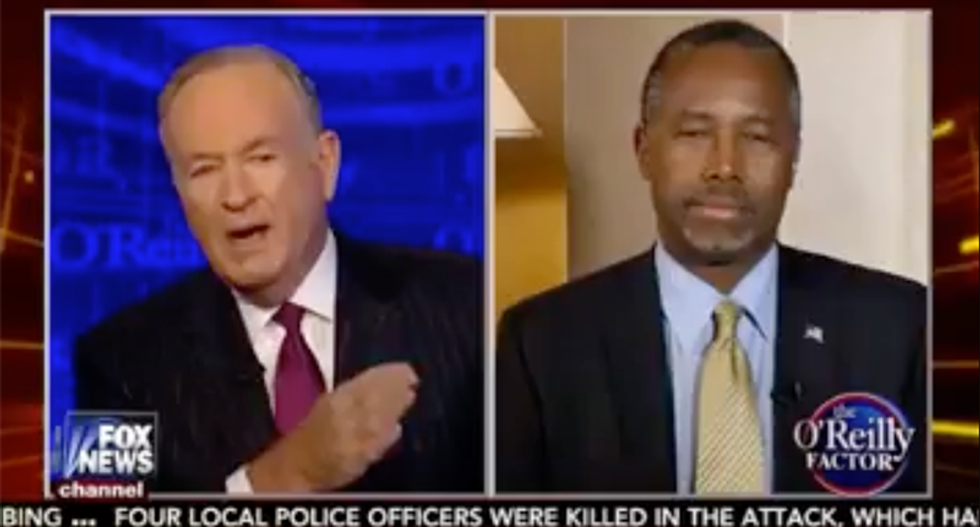 In a stunning moment of reality on Fox News Monday Night, Bill O'Reilly shoveled a dose down Republican presidential candidate Ben Carson's throat when he said that it would take a miracle for Carson to win at this point in the race.

After coming in last in the South Carolina primary Saturday, Carson told his supporters that he got just as many delegates as the other candidates except the winner.

Carson statement for the ages! he "received as many delegates in South Carolina as all other candidates but the winner"
— Jonathan Martin (@Jonathan Martin) 1456024809.0

"Late Late Show" host James Corden mocked him mercilessly clarifying that the number of delegates is, in fact, zero.

O'Reilly should have been the final knifing to the Carson ego, but he insisted that with "one more point" he would have come in third.

"But, really, and you know me, I'm a fairly straight forward guy," O'Reilly explained. "It would take a miracle for not only you but John Kasich, at this point, with the delegate situation being what it is, to overcome Trump." He was holding out hope that Sens. Marco Rubio (R-FL) and Ted Cruz (R-TX) could catch fire and eek out a win over Trump. "But for you," O'Reilly said shrugging. "Very difficult."

Carson maintained that anything is possible saying, "a lot of things can happen." He attempted to reassure O'Reilly that he would be more successful if they focused on the issues rather than the "personalities" now that there are only five candidates.

"Nevada doesn't really matter for you," O'Reilly said, but Super Tuesday on March 1 does. "You know, doc," he said sighing. "I gotta tell ya, I just don't think you're gonna do it. It's not you," he explained making it sound more like a break-up conversation than a reality check. "It's history. It's almost like Governor Bush in a sense that it was just the wrong time for Governor Bush up against the colossus."

Carson reluctantly agreed, "That may be." However, he then launched into a story about Bill Clinton's success which didn't come until after the sixth contest. But O'Reilly shut him down. Clinton didn't have Donald Trump to contend with. O'Reilly then mentioned, almost in passing, that Carson will be forced to drop out after March 1, but is curious who he'll end up endorsing. "Is there someone in mind, you don't have to tell me tonight. I don't think it's fair to ask you to do that," he said before asking Carson to do exactly that.

Carson wouldn't commit to anyone and tried to return to his message, saying that he believes once the campaign can get past the cult of personality that they will return to the issues and he will prevail.