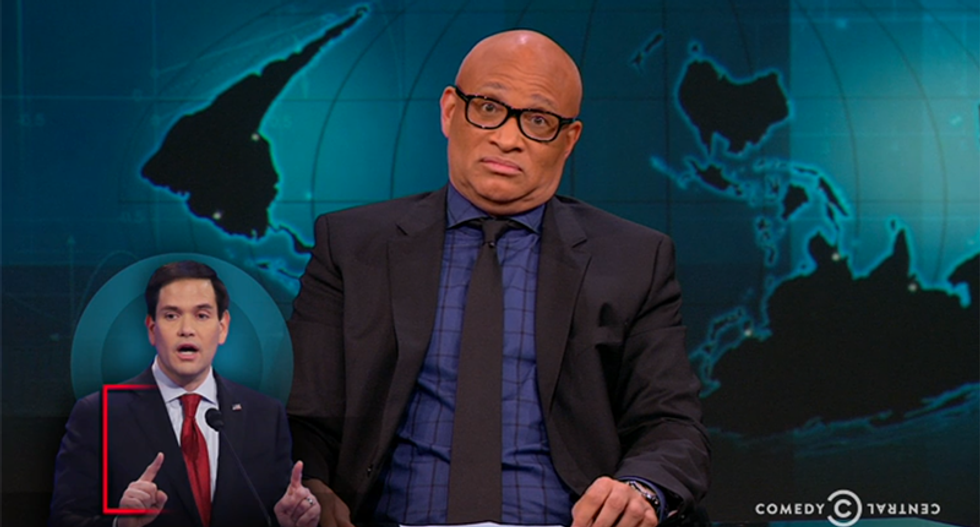 Those that tuned in to this weekend's Republican debate witnessed what happens when a candidate is so rattled he reverts to a practiced talking point. The now famous "Rubio Glitch," made its way around the late-night comedy shows, but Larry Wilmore took it to a whole new level on Monday evening's "Nightly Show," where he called Rubio the "biggest loser."

Wilmore played the attack from Chris Christie who called Rubio another scripted Washington, D.C. politician, to which Rubio responded with his practiced sound bite. "So, you responded to the accusation of being too scripted by being too scripted?!" Wilmore exclaimed. "Ok, I know you must have been really embarrassed, Rubio. I get it, man. It's hot under the lights and he called you out. Maybe he caught you off guard. But now, ok, here's your chance to set the record straight." Rubio simply repeated the same talking point. "You gotta be f*cking kidding me?! He did it again! What's wrong with you?! Trump, if you're looking for torture, make them listen to Marco Rubio."

But, it seems that Rubio's glitch on Saturday isn't the only time the Florida Senator has recycled comments proving to be "embarrassingly scripted." Wilmore ran a clip from Rubio's television ad currently running in New Hampshire. He then played an ad that appeared during the Iowa Caucuses, and the scripts are identical.

"That's right! A Marco Rubio campaign ad is plagiarizing another Marco Rubio campaign ad," Wilmore said shrugging his shoulders. "He's stealing from himself!" He then played the ads side-by-side to prove that everything is exactly the same with the exception of the people saying it. "So the zombie candidate is now recruiting a whole army of zombies?!" Wilmore exclaimed before showing "footage" of a Rubio campaign rally in Manchester, which is actually a clip of the film "Shawn of the Dead."

He went on to say that the GOP has gotten so bizarre that they remind him of the Super Bowl ad with puppymonkeybaby. "Jeb Bush is the puppy. He was bred specifically to be president but instead he just flops around helplessly. Although, he has, recently, stopped peeing all over himself. So, that's progress. Rubio is the monkey, mindlessly repeating whatever his trainer tells him. And Donald Trump's the baby. Yelling and whining and keeping everyone from having an adult conversation. Plus his hands are the same size as that baby's," Wilmore said returning to the insult that is apparently Trump's Achille's heel.