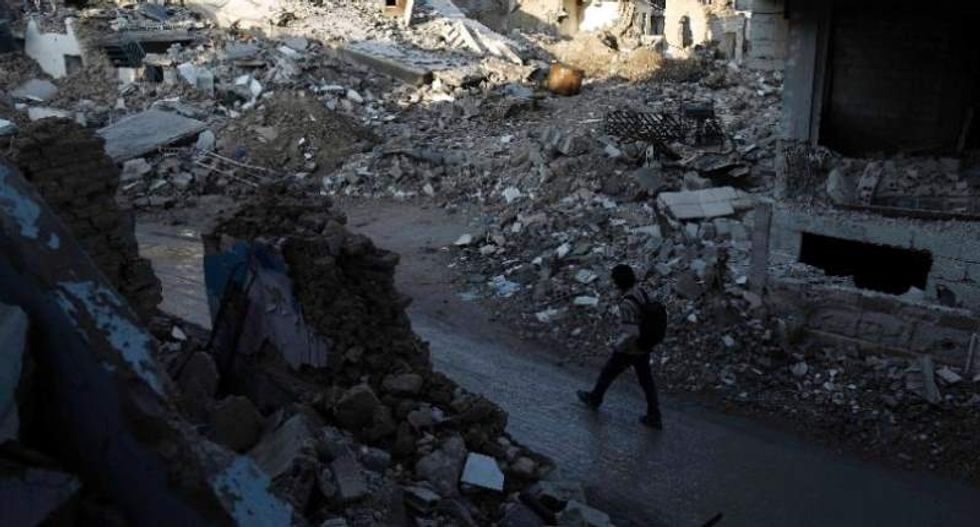 A Syrian man walks along a street damaged by shelling in the neighbourhood of Jobar on the eastern outskirts of the capital Damascus, on Feb. 24, 2016 (AFP/Abdulmonam Eassa)

A landmark UN-backed ceasefire came into effect at midnight in Syria on Friday -- the first major truce in five years of civil war that have claimed more than 270,000 lives.

On the stroke of midnight, guns fell silent in the Damascus suburbs and the devastated northern city of Aleppo, AFP correspondents said, after a day of intense Russian air strikes on rebel bastions across the country.

Russia and the United States, the sponsors of the ceasefire deal, have warned that applying it will be difficult in a country that has been torn apart by a conflict that broke out in March 2011.

Before the 2200 GMT ceasefire, US President Barack Obama had warned Damascus and its key ally Moscow that the "world will be watching".

UN envoy Staffan de Mistura said Syria peace talks which collapsed earlier this month in Geneva would resume on March 7 if the ceasefire holds and more aid is delivered.

Less than an hour before the ceasefire, the UN Security Council gave its unanimous backing to a resolution drafted by the US and Russia, demanding that it be upheld.

Both President Bashar al-Assad's regime and the main opposition body have agreed to the ceasefire -- which allows fighting to continue against the Islamic State group and other jihadists.

The agreement is the biggest diplomatic push yet to help end the bloodshed, but it has been plagued by doubts after previous peace efforts failed.

Members of the 17-nation group backing the process were meeting in Geneva to work out further details of the so-called "cessation of hostilities".

The Syrian Observatory for Human Rights, a Britain-based monitor, said Russia and the regime had launched a wave of attacks on non-jihadist rebel areas before the deadline.

"It's more intense than usual. It's as if they want to subdue rebels in these regions or score points before the ceasefire," Observatory head Rami Abdel Rahman said.

He also said at least 40 members of the regime forces had been killed battling rebels in northern Latakia province, Assad's heartland, in the 24 hours before the ceasefire.

Russia launched air strikes in Syria last September saying it was targeting "terrorists", but critics have accused Moscow of hitting rebel forces in support of Assad.

The Observatory said there had been Russian strikes on rebel bastions including the Eastern Ghouta region outside Damascus, northern Homs province and the west of Aleppo province.

There were at least 26 air strikes on Eastern Ghouta including 10 on its main city of Douma which was facing heavy regime shelling, it said.

"The decisive fight against them will, without doubt, be continued," Putin said in televised remarks.

"We understand fully and take into account that this will be a complicated, and maybe even contradictory process of reconciliation, but there is no other way."

The intensified attacks prompted Turkey, a key supporter of opposition forces, to express worries over the viability of the ceasefire.

"We are seriously concerned over the future of the ceasefire because of the continuing Russian air raids and ground attacks by forces of Assad," presidential spokesman Ibrahim Kalin told reporters in Ankara.

US State Department spokesman Mark Toner said Washington had received assurances from Moscow that it would not bomb the "moderate opposition" after the truce.

"I don't know how to put it any better than saying: 'It's put up or shut up time,'" he told reporters.

The complexity of Syria's battlefields -- where moderate and Islamist rebel forces often fight alongside jihadist groups such as the Al-Qaeda affiliated Al-Nusra Front -- has raised serious doubts about the feasibility of a ceasefire.

Al-Nusra's chief Mohammad al-Jolani on Friday urged Assad's opponents to reject it and instead intensify attacks on the regime.

"Beware of this trick from the West and America," he said in an audio message. "Negotiations are the ones conducted on the battlefield."

Diplomats are reported to be working to define areas that will fall under the partial truce and to set up monitoring mechanisms.

International Committee of the Red Cross chief Peter Maurer told AFP in Damascus he hoped the ceasefire would open up previously inaccessible areas.

"Humanitarian deliveries must not depend on political negotiations but must be allowed to continue and increase regardless of any truce or ceasefire," he said.

Syria's top opposition grouping -- the Riyadh-based High Negotiations Committee (HNC) -- said Friday that 97 opposition factions had signed on "to respect a temporary truce", but reiterated that it was only agreeing to an initial two-week period.

It said Damascus and its allies must not continue attacking rebel forces "under the pretext of fighting terrorism".

The HNC said any new bombing of the rebel-held town of Daraya in Damascus's southwestern suburbs would violate the agreement after the army said it would exclude it from the ceasefire because forces there included Al-Nusra fighters.

Russia and the United States are on opposing sides of the conflict, with Moscow backing Assad and Washington supporting the opposition, but have made a concerted push for the ceasefire to be respected.

Iran, another key Assad ally, has said it is confident the regime will abide by the agreement.

In Washington on Thursday, Obama put the onus firmly on the regime and Russia.

"The coming days will be critical, and the world will be watching," he said.

Most of us tend to think that voting is one of the guaranteed privileges of being a citizen of the United States. But throughout our history, the link between voting and citizenship has been fluid and fraught.

Non-citizens used to vote. Citizens were barred from voting. Women could even have their citizenship revoked if they married immigrants. The only constant was that politics defined the line between them.

Last year, Texas Republicans in the Legislature passed an elections law that banned local election officials from that very same practice under the banner of protecting election integrity. However, the law made an exception for candidates and political parties to continue the practice, which has long been a popular get-out-the-vote tactic typically employed by both parties, but especially by Republicans.

Democrats this week said Crenshaw’s mailer highlights hypocrisy in the new voting law and shows that Republicans who railed against vote-by-mail expansion efforts last year were only concerned about the ways it could benefit Democrats. Crenshaw’s mailer includes a prefilled mail-in application and instructions that tell the recipient to “simply sign, stamp, and mail” it and to “be sure to vote for Dan Crenshaw” when the ballot comes.