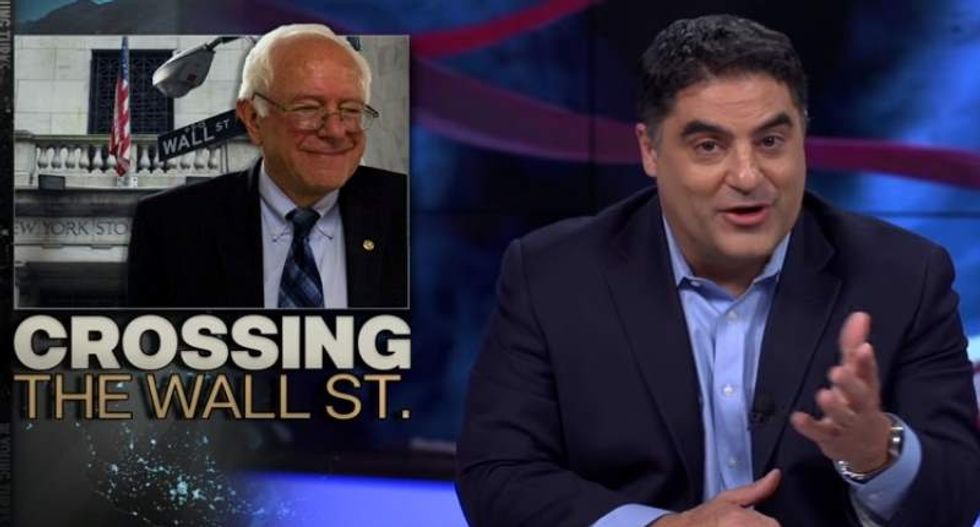 "They cry their crocodile tears: 'Sanders is actually gonna fix the system. How dare he, class warrior?'" Uygur said. "No, you committed class warfare on the rest of us. You stole our government, then you redirected trillions of money into your pockets."

The op-ed by Bret Stephens accused Sanders of trying to paint everyone working on Wall Street as a criminal because of his campaign's focus on economic and campaign finance reforms.

"No political or social penalties attach, in today's America, to the wholesale indictment of this entire industry and the people who work in it," Stephens complained. "Had another presidential candidate made a similarly damning remark about some other profession—public-school teachers, say, or oil-rig workers—there would have been the usual outcry about false stereotypes, the decline of civility and so on. When Bernie says it about Wall Street there’s a collective shrug, if not nodding agreement."

"That's not what he did," Uygur responded. "You're lying about that. 'Cause you don't want him to fix [the Glass-Steagall Banking Act] 'cause that's how you guys get rich -- by gambling with our money."

Stephens also said that one reason Sanders has connected well with younger voters is because his idea of wisdom is "to hold fast to the angry convictions of his adolescence."

"Isn't it kind of juvenile to go around calling a presidential candidate childish?" Uygur asked, adding that younger voters are often more informed than their elders.

"The older voters who watch TV get broad general comments about the candidates," the host said. "They never dig into the issues. The younger voters, who get their news online, have access to all their positions on all their issues. They're far more educated than the older knucklehead voters you guys have been brainwashing all these years."

Watch Uygur's commentary, as aired on Tuesday, below.