Christian voters back Trump whether or not he's a Christian -- because party loyalty trumps religion: study 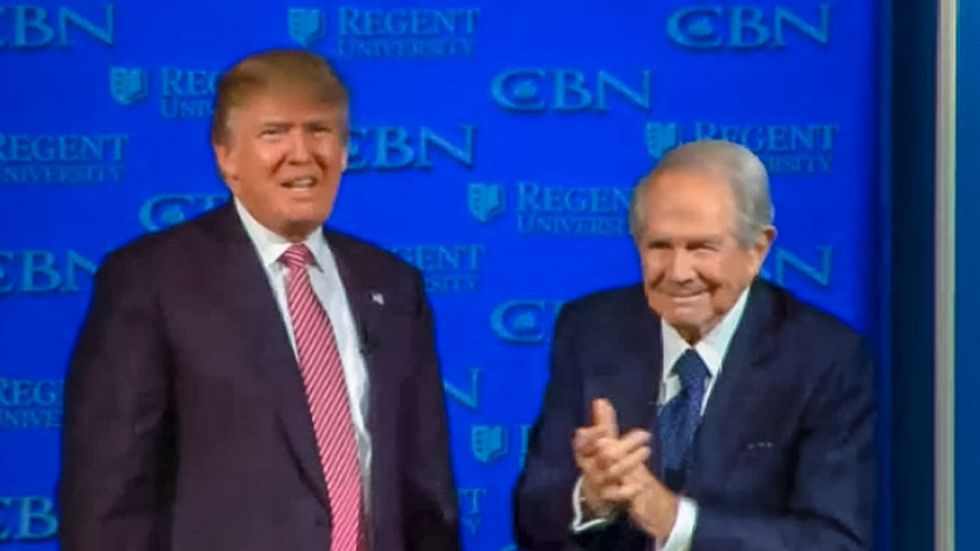 Donald Trump says he's a Christian, but he can't name a favorite Bible verse. To solve that problem, he has gone ahead and made up his very own.

But that hasn't stopped Christians like Jerry Falwell, Jr. and Pat Robertson from flocking to him. According to the National Catholic Reporter, that's because politcal party allegiance trumps religious values.

The Reporter points to Trump's recent falling out with Pope Francis, who when asked, criticized Trump's decidedly un-Christian promise to build a "great wall" between the United States and Mexico.

“A person who thinks only about building walls, wherever they may be, and not of building bridges, is not Christian. This is not the gospel," the Pontiff had said.

The Reporter goes on to state that many of Trump's values don't line up with Christian ones, including his attacks on Muslims and lack of support for comprehensive immigration reform.

"His unequivocal embrace of an under-regulated market economy; tax policy, which in no way, shape, or form embodies a preferential option for the poor; blaming the victims of the Paris and San Bernardino shootings; support for Planned Parenthood; and advocacy for torture and bombing the s--- out of the Middle East all show that there is an entirely different set of values at the heart of his platform," Daniel and Kasey Petri write.

The writers blame a concept called "voter rationalization," which basically means voters select who they will support very early on, then rationalize backwards as to why they are right to do so.

"[Voters] do not take new facts and information and use these newly discovered pieces of data to pick candidates or change their own perspectives," they write. "Instead, voters already have pre-determined party or candidate loyalties and they fit these pre-determined loyalties into their worldviews. In other words, party loyalty trumps religious values and ideology."

That still doesn't quite explain the phenomenon, because as the writers point out, the vast majority of evangelical voters -- 90 percent -- believe a candidate should be devout.

The Reporter notes that religious voters don't flee if their pre-chosen candidate doesn't fall in line with their beliefs -- instead they apply the same "voter rationalization" maneuvers.

"[T]heir identity as believers also requires them go a step further and square that preference with their faith," they write. "In other words, the religious voter cannot simply support a candidate because he or she is a member of a certain party but must also justify that support as in keeping with their religious values."

Trump says he's religious -- and despite the obvious, that's good enough for them.

The Pope -- who traditionally holds one of the highest offices in Christendom and by all measures is an authority figure in the faith -- recently called that assumption into question. Conservative Christians responded not with deference but by recoiling, posting pictures of a porous, medieval wall that has surrounded the Vatican more than 1,000 years as proof that Francis is a hypocrite.

"The pope's statement has presented an opportunity for Christian voters to move beyond easy rationalizations and consider more deeply how their faith should influence their political participation," the Petris write. "In the face of this opportunity, many Christians have chosen instead to continue supporting Trump using the only justification they can: Trump must be a Christian."