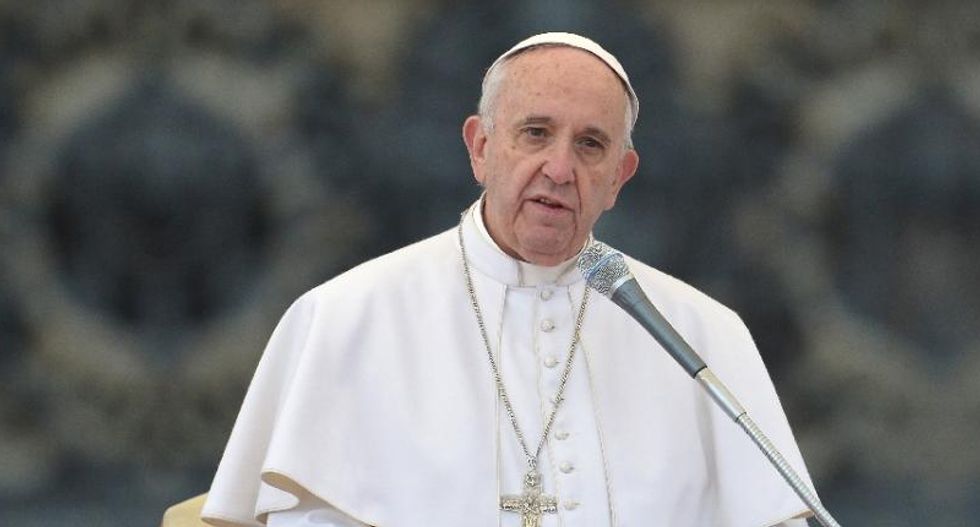 Pope Francis came under fire Wednesday after lavishing praise on China in a move widely seen as part of Vatican moves to improve relations with Beijing.

Close watchers of the Holy See were taken by surprise by the content of an interview with the Asia Times in which the Argentinian pontiff said the world need not fear China's growing power and avoided any mention of human rights or the restrictions on Catholics and other Christians' freedom of worship in the world's most populous nation.

"A superb example of Realpolitik pushed to the extreme," was the verdict of Sandro Magister, one of Italy's leading Vatican experts.

Writing on his blog for Italian weekly L'Espresso, Magister lamented Francis's "total silence" on questions of religion and freedom and what he interpreted as an "unrestrained absolution" of the Chinese communist regime's historical record.

In the interview, Francis said China had always been, for him, a "reference point of greatness" and "a great culture, with an inexhaustible wisdom."

The Argentinian pope made only the lightest of allusions to China's troubled recent history, saying a people sometimes "makes a mistake and goes backwards a little, or takes the wrong path and has to retrace its steps to follow the right way."

Chinese Foreign Ministry spokesman Lu Kang said the pope's remarks had been noted. "We also hope that the Vatican can take a flexible, pragmatic attitude to creating conditions for improving ties," he said.

The Vatican has not had diplomatic relations with China since 1951, with the rupture having come only two years after the founding of the People's Republic.

All attempts to restore them have since floundered with Beijing insisting that the Vatican must first give up its recognition of Taiwan as a sovereign state and promise not to interfere in religious issues in China.

Magister contrasted Francis's optimistic portrayal of China's potential future with the gloomy outlook of Gianni Criveller, a Catholic missionary and China expert based in Hong Kong.

Criveller recently published an article voicing fear for Hong Kong's basic freedoms and highlighting the case of Wei Heping, a priest serving an underground Catholic community found dead in a river in Shanxi province in November in what the authorities have deemed to have been a suicide.

"Many believe he met a violent death because of his influence with young people and online," Criveller wrote. "For many Catholics he is a martyr."

The plight of Catholics in China, including a recent campaign to remove crosses from church buildings and imprisonment and intimidation of clerics, was also highlighted by American Vatican commentator John Allen in his www.cruxnow.com column.

"Those paying a price for their faith in China today may be disappointed that the pontiff did not address their fate more directly," Allen commented, while recalling that dilemmas related to how engage China were not restricted to the Church.

"Time will tell ... whether the goodwill a pope buys by skipping over such matters will produce results down the line," Allen wrote.

Francis was given an easier ride in the Italian Catholic daily Avvenire by Stefania Falasca, who praised the pontiff for applying "the geopolitics of mercy" to the challenges raised by China's growing weight in the world.

The pope's interview follows a discreet visit to the Vatican by a delegation of Chinese officials in January which raised hopes of a breakthrough on the contentious issue of the pope's right to appoint Catholic bishops in China.

Beijing recognises the country's estimated 12 million Catholics' right to exercise their faith but insists they do so under the auspices of the state-controlled "Catholic Patriotic Association."

Within the Vatican there has been a long-running debate between those who argue that the Church should seek to improve relations with China first and hope that yields greater freedom for its followers, and those who maintain that abuses must not go unchallenged.

Francis's latest interview suggests the former camp has the upper hand for now - and they will have been encouraged by China's guardedly positive reaction.