Christie backed Trump because Rubio inadvertently insulted him while seeking his support: NYT 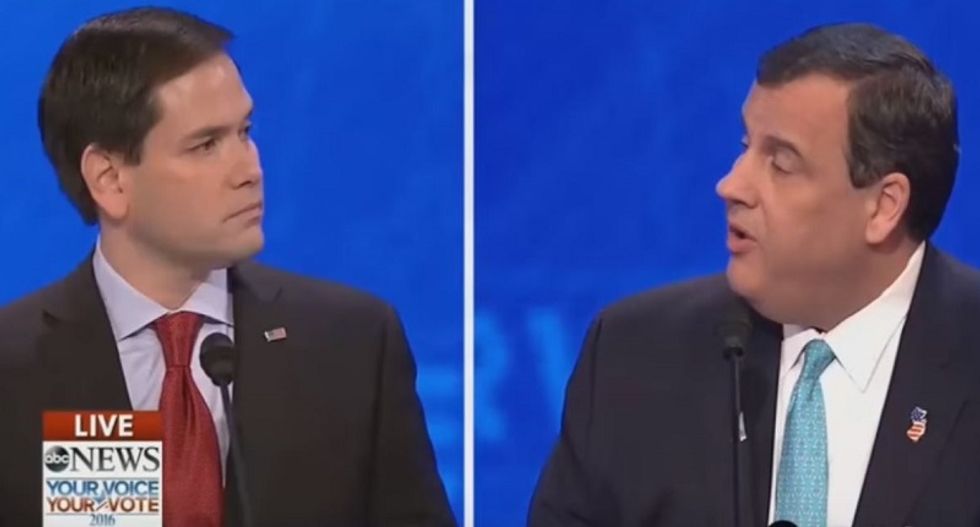 It came as a surprise to many that New Jersey Gov. Chris Christie came out in support of controversial GOP front runner Donald Trump this week, but the New York Times revealed the decision may have been more personal than political.

On Saturday, the New York Times reported a key reason for Christie's decision may have been a clumsily-worded phone call from Trump's rival, Florida Sen. Marco Rubio. Soon after Christie dropped out of the race, Rubio left him a voice mail seeking his support, and also saying Christie had a bright future in public service. This apparently rubbed Christie the wrong way.

According to the Times, Christie interpreted it as patronizing and disrespectful, and wanted to know why "a 44-year-old" was talking to him about his future in politics. Christie is 53.

The report, citing multiple insiders, goes on to describe the increasingly panicked and heated internecine war within the GOP as Trump continues to surge, despite the fact the party establishment has all but rejected him.

The Times reports that Senate Majority Leader Mitch McConnell has already laid out plans to drop Trump "like a hot rock" if he secures the party nomination.

By all measures, it seems Christie despises Rubio. Earlier this month he hammered the junior senator for being shallow and relying on prepared speeches, calling him unprepared to lead the country.

"See Marco — Marco, the thing is this. When you’re president of the United States, when you’re a governor of a state, the memorized 30-second speech where you talk about how great America is at the end of it doesn’t solve one problem for one person," Christie had said.

Rubio has since gone on the offensive against Trump, coming out swinging in this week's debate, and continuing on the attack since.

Christie wrote it off as "flailing punches in the last days of a losing campaign.”