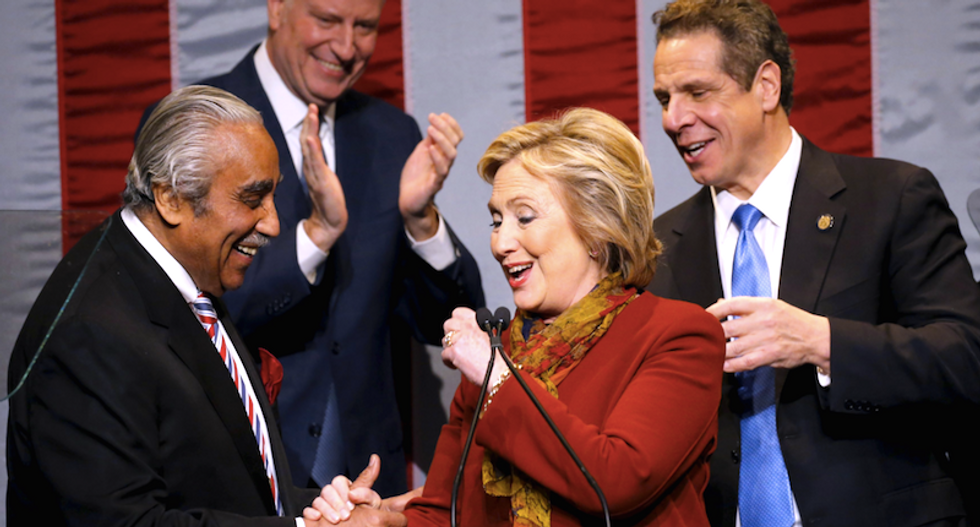 Democratic U.S. presidential candidate Hillary Clinton is introduced by U.S. Representative Charles Rangel (D-NY) (L) as she is applauded by New York City Mayor Bill de Blasio (back L) and New York Governor Andrew Cuomo (back R) for her address at the The Schomburg Center for Research in Black Culture in the Harlem section of New York City, February 16, 2016. (REUTERS/Mike Segar)

Clinton is seeking to maintain her lead among black voters over U.S. Senator Bernie Sanders of Vermont, her rival for the Democratic nomination for the Nov. 8 election to succeed Democrat Barack Obama, the first black U.S. president.

The Clinton campaign said last week: "It will be very difficult, if not impossible, for a Democrat to win the nomination without strong levels of support among African-American and Hispanic voters."

Clinton's status as the Democratic front-runner was jolted this month when the former secretary of state beat Sanders by less than a percentage point in Iowa's caucuses and lost to him by more than 20 points in the New Hampshire primary. More than 90 percent of people in those states are white.

Clinton met for more than two hours on Tuesday with a half-dozen civil rights leaders at the New York headquarters of the National Urban League.

"I thought that the secretary demonstrated an ease and familiarity with many of the issues we discussed this morning," National Urban League President Marc Morial said afterward.

The Rev. Al Sharpton joked with Clinton in the corridors afterward, suggesting to reporters he had told her which candidate he would endorse.

"My lips are sealed!" Clinton, who did not take any media questions, replied with a smile.

At a news conference later, Sharpton said Clinton was "candid and open," but he added he had yet to decide who to support and that no candidate should take the support of black voters for granted. "We are not a monolithic people," he said.

Clinton's campaign team has argued that Sanders' growing support among Democrats will likely falter as voting for a party nominee moves to more racially diverse states in the coming weeks.

Both Clinton and her husband, former President Bill Clinton, have traditionally had solid support from blacks, a key component of the Democratic electorate.

Opinion polls show Clinton with a strong lead over Sanders in South Carolina, where blacks are likely to make up more than half the voters in the state's Democratic primary on Feb. 27.

Sanders has said Clinton's polling lead among blacks is partly a result of her being more famous than he is. He believes many non-white voters will be drawn to his message of fighting economic inequality as they get to know him.

He is scheduled to meet with civil rights leaders in Washington on Thursday.

"There are still very real barriers holding back African-Americans from fully participating in our economy and our society," Clinton said, citing disparities between blacks and whites in earnings, health and criminal sentencing.

She said that if elected, she would spend $2 billion to encourage public school districts with a high number of troubled students to hire social workers and other experts to help young people before they get entangled in the criminal justice system.

Sanders, who frequently decries the country's high incarceration rate, also met with Sharpton earlier this month, and was endorsed by Benjamin Jealous, former president of the National Association for the Advancement of Colored People, who said he could not support Clinton in part because of her support of the death penalty.

Clinton was endorsed last week by the Congressional Black Caucus Political Action Committee, which said Clinton had a long history of working on issues that affect black Americans.

Four Republican members of Arizona's state legislature attended a QAnon convention in Las Vegas over the weekend that included speakers from the fringe of the conspiracy world as well as antisemitic imagery.

One of the legislators, Rep. Leo Biasiucci of Lake Havasu City, bragged to the attendees of Patriot Double Down that he stood strong against people who tried to convince him not to attend a gathering so closely tied to a violent extremist belief system that calls for the death of political enemies. He recounted an exchange he had with an unnamed Arizona lobbyist whose client was concerned about being associated with Biasiucci.