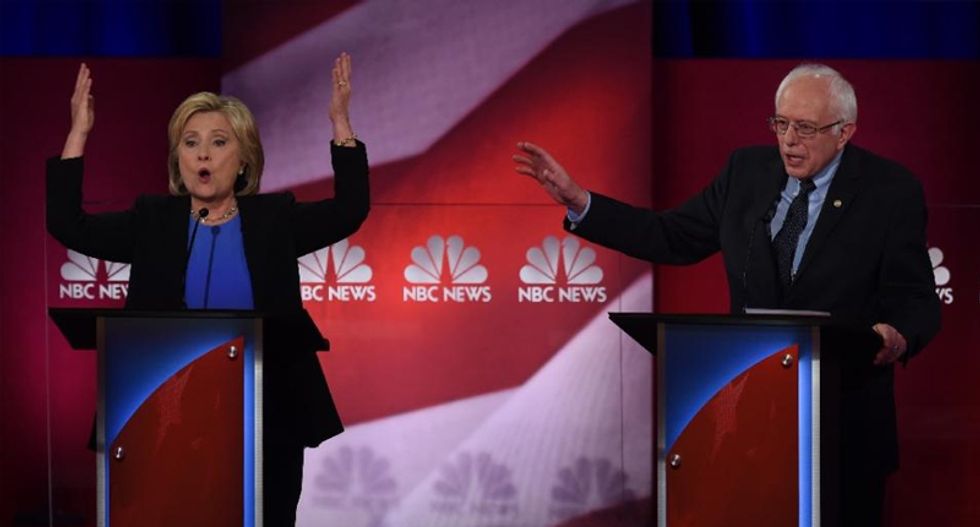 It may be the narrowest victory in Iowa history, but Hillary Clinton's win over Bernie Sanders puts her on course to clinch the Democratic nomination even if it's more of an uphill battle than she once hoped.

The former secretary of state took 49.8 percent of the vote compared to 49.6 percent for Sanders, allowing her to breathe "a big sigh of relief" in the Midwest heartland that ditched her for Barack Obama eight years ago.

"Make no mistake we are in a fight to the finish," she told voters in New Hampshire as the Republican field edged into a three-horse race between evangelical Ted Cruz, billionaire Donald Trump and telegenic Marco Rubio.

Sanders, who just months ago posed no threat as a fringe firebrand, declared a moral victory for his brand of progressive politics, brimming with confidence as polls give him a double-digit lead for next week's primary in New Hampshire.

"For Clinton, it was clearly a case of surviving and advancing," said Dante Scala, associate professor of political science at the University of New Hampshire, which hosts the next Democratic debate on Thursday.

"That narrow a win -- it's tough to take. I'm sure it's a sigh of relief... because I think a loss would have gone a long way to changing the conventional wisdom about Sanders's ability to win the nomination."

The 74-year-old senator from Vermont has inspired a passionate following among young voters with his Scandinavian-inspired anti-Wall Street, poverty busting, democratic socialist agenda.

His surge of support may have taken the establishment by surprise, but in Iowa he failed to match what Barack Obama achieved in 2008, when he shocked Clinton by snatching 37.6 percent of the vote to her 29.5 percent.

"He's clearly someone to contend with, however I don't think he managed, though he came awfully close, to shock the national political media with the results and it was in a state where Clinton did lose eight years ago," said Scala.

Neither would a defeat in New Hampshire ruffle too many Clinton feathers in a predominantly white state neighboring Sanders's home base of Vermont.

"They never voted against anybody from next door except when an incumbent president asked them to do something else," Clinton's husband, former president Bill noted drily at the start of the week.

What is more unsettling, say some, is the support Sanders enjoys among moderate, blue collar Democrats in New Hampshire traditionally expected to vote Clinton.

Perhaps most disconcerting for Clinton in Iowa, was Sanders's crushing victory among Democratic voters aged 17 to 29, who gave him 84 percent of their vote.

The 68-year-old Clinton -- by contrast -- did best among caucusgoers aged 65 and over, a turnout likely to fuel criticism that her message shaped during two decades on the public stage is not geared toward the future.

But the more decisive test will come in racially diverse states in the west and south, such as Nevada and South Carolina, where Clinton's support among blacks and Latinos is expected to defeat Sanders on February 20 and 27.

"If you look at the national polls thus far, she is pretty consistently and noticeably ahead of Bernie, although the gap is narrower," said Robert Shapiro, political science professor at Columbia University.

"If Sanders can do better than expected in those places, he is going to be in for the long haul."

Others are more cautious about Sanders's performance in Iowa, arguing that he could have expected a clear victory among a liberal Democratic electorate.

"The fact that she managed to eke out even a narrow victory is testament to her campaign's ability to hone its ground game and that will be a huge advantage moving forward," said Costas Panagopoulos, a professor of political science at Fordham University in New York.

Sanders's left-leaning politics also alarms the party elite, who see Clinton as the best prospect of keeping the Republicans out of the White House.

"They don't want Sanders as their nominee and so they're willing to give Clinton the benefit of the doubt," Scala told AFP.

"They're not going to talk down Clinton just because she barely won Iowa. For them they're very happy to say 'a win's, a win, let's move on.'"