Colbert imagines Trump as Christ: ‘Blessed are the poor — unless they said something bad about me’ 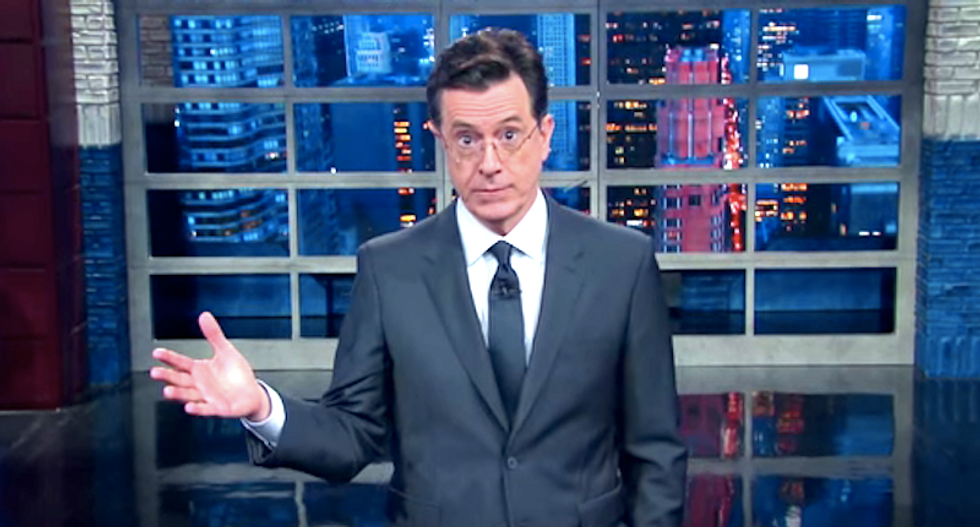 Stephen Colbert weighed in on the feud between Donald Trump and Pope Francis.

The pontiff questioned the Republican presidential frontrunner's religious sincerity during a visit to the U.S.-Mexico border -- where Trump has vowed to build a wall to keep out migrants and refugees.

"A person who thinks only about building walls wherever they may be and not of building bridges is not a Christian," Pope Francis said. "This man is not Christian if he has said things like that."

Colbert's audience cheered as he read the quote, and he reminded the crowd that Trump has said exactly what the pope has accused him of saying.

He joked that Trump had gotten his idea to build a wall around the U.S. from the Vatican City, which is surrounded by walls constructed in the ninth century A.D., following an attack by pirates, and finally completed in the 1640s.

Trump responded immediately to the pope's criticism, accusing the Mexican government of turning the pontiff against him and then marveling that Pope Francis had mentioned him.

"As I'm walking up here, they said, 'Mr. Trump, the pope made a statement about you,' and I said, 'The pope? What did the pope say? I like the pope -- was it good or bad?'" Trump said Thursday during a campaign rally. "'Because if it was good, I like the pope. If it's bad, I don't like the pope.'"

Colbert, a practicing Catholic, said he had to respect Trump's honesty.

"It's like Jesus said: 'Blessed are the poor, unless they said something bad about me -- then screw them,'" Colbert said.

He reminded Trump and the pope of how much they had in common, saying both men sat on golden thrones -- the pope's a literal throne, the reality TV star's a golden toilet -- and wore "very silly things" on their heads.

But he ended the segment with a withering dismissal of the bombastic GOP candidate, who tried to have the last word by asking his supporters if they wanted to hear his statement in response to Pope Francis.

"Not really," Colbert said, moving on to other business.