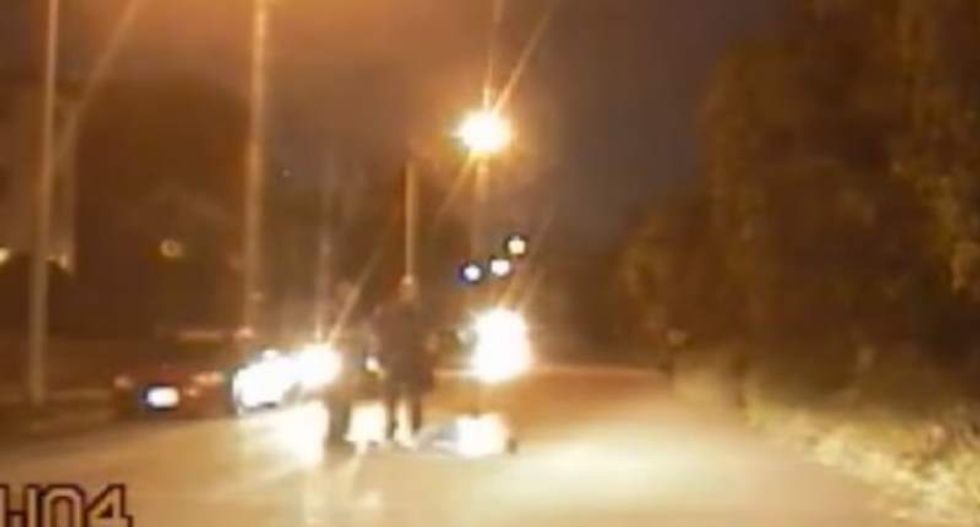 Both WTNH-TV and the Meriden Record-Journal obtained the footage of John Slepski and John Slezak's actions last September while detaining an unidentified man they found unconscious and intoxicated on a local road.

Slezak was subsequently suspended for five days, while Slepski was suspended for 60 days. Both men began serving their suspensions this month, though Slezak has reportedly filed a grievance against his suspension.

The footage shows Slepski immediately calling the man a "f*cking a*shole" upon arriving at the scene, adding, "I think we oughta just f*cking pop him. I think we should just pop him."

Slezak, who can be seen approaching the man from another patrol car, says in response that the man was "fine" and "just wants a ride to the hospital."

The two then discuss using pepper spray on the man, but investigators determined that the footage revealed no use of it during the incident.

"Your dehumanizing and demoralizing treatment of this citizen in need of medical attention sickens me," Cossette wrote. "Your actions did not perpetuate the mission of the Meriden Police Department."

Cossette also criticized Slezak, telling him, "If a fellow officer is behaving in a demeaning and demoralizing way toward a citizen, you have a Duty to Act."

However, Detective and police union president John Williams said that Slezak did nothing to merit even a brief suspension.

"What behavior did he have?" Williams asked the Record-Journal. "He cannot control what comes out of Slepski's mouth."

Watch WTNH's report on the incident, as aired on Friday, below.