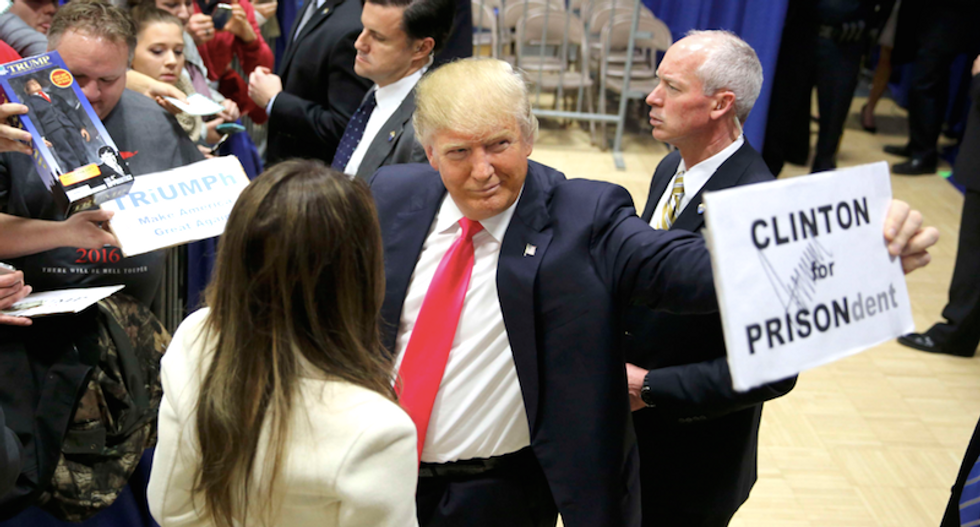 U.S. Republican presidential candidate Donald Trump holds up a sign given to him by a supporter at the end of a campaign rally in Council Bluffs, Iowa, January 31, 2016. (REUTERS/Scott Morgan)

Republicans Donald Trump and Ted Cruz battled on Sunday to persuade their supporters to turn out and tried to lower expectations on how well they will do in the first U.S. presidential nominating contest in Iowa on Monday.

Iowa will set the tone in the race for the Nov. 8 election, offering the first measure of the strength of outsider candidates like billionaire businessman Trump and democratic socialist Bernie Sanders against more traditional politicians like Republican Senator Marco Rubio of Florida and Democratic front-runner Hillary Clinton.

The day before Iowa's caucuses, Trump and Cruz, a senator from Texas and conservative Tea Party favorite, reflected anxiety about the unpredictability of the race in the Midwestern state as they and other candidates made their final pitches at rallies across Iowa.

A Des Moines Register/Bloomberg News poll of Iowa voters released on Saturday showed Trump in the lead among Republicans with 28 percent, Cruz second at 23 percent and Rubio in third with 15 percent.

In rallies in Council Bluffs and Sioux City, Trump displayed a more low-key style than his usual flame-throwing flourishes in an apparent bid to appeal to Iowa religious conservatives who have for the most part backed Cruz.

Trump, sitting on stage, was asked friendly questions by religious leader Jerry Falwell Jr., who portrayed Trump as a family man and supporter of Christian charities who served cheeseburgers instead of caviar on his plane.

In Council Bluffs earlier, Trump brought his wife and daughter on stage and implored Republicans to pick him, noting that Iowa's 2008 winner, Mike Huckabee, and 2012 victor Rick Santorum both ultimately failed to win the Republican nomination.

“You have a lousy record - 16 years you haven’t picked a winner. Please pick a winner this time,” he said.

In Iowa City, Cruz urged about 500 supporters crammed into a building at the county fairgrounds to turn out for the caucuses if they wanted to help him break the cycle of politics as usual in Washington.

"Join us, commit tomorrow night to come out and caucus for us. Stand up and speak for us. If we stand together, we will win," he said.

Among Democrats, Clinton, a former secretary of state, senator and first lady, clung to a narrow 45 percent to 42 percent lead over Sanders, putting the senator from Vermont in position for a potential upset win that would be a harsh blow to Clinton.

In Marshalltown, Iowa, Sanders called the race basically a toss-up.

Although Clinton spent much of her time at a rally in Council Bluffs contrasting her vision with those of the Republican candidates, she said that while she and Sanders shared the goal of achieving universal healthcare, he had a "different view" of how to accomplish it.

The Sanders and Clinton campaigns have been squabbling over adding more debates to the relatively skimpy schedule of six debates organized by the Democratic National Committee.

MNSBC said on Sunday both candidates had agreed to join former Maryland Governor Martin O'Malley at a previously announced debate in New Hampshire on Thursday.

'Dont have to win it'

The central mystery about Trump's campaign in Iowa has been whether the real estate mogul and former reality TV star can convert voter enthusiasm for his candidacy into actual turnout at the caucuses.

Trump, who has never sat through a nerve-wracking night of vote counting, was not predicting victory in Iowa in interviews and stump speeches on Sunday.

"No, I don't have to win it," he told CBS' "Face the Nation" when asked whether he needed to win Iowa. "But I think it would be really good to win Iowa."

Cruz, who saw his lead in the state overtaken by Trump but may have a stronger turnout operation, also tried to lower expectations.

"No, we don't view any state as a must-win," Cruz told CNN. "We are positioned to do very well."

Ten Republicans and three Democrats are campaigning in Iowa for their parties' nominations, but much of the focus has been on the fight between Cruz and Trump and their uneasy relationship with the Republican establishment.

Trump described Cruz as a "nasty guy" who had not scored key endorsements in the Senate, and would have trouble leading change in Washington.

"Nobody likes him," Trump told ABC's "This Week."

Cruz attacked Trump on CNN's "State of the Union," calling Trump's refusal to appear onstage at Thursday's Republican debate in Des Moines "a real mistake," and likening Trump's views to those of Democratic President Barack Obama and Sanders.