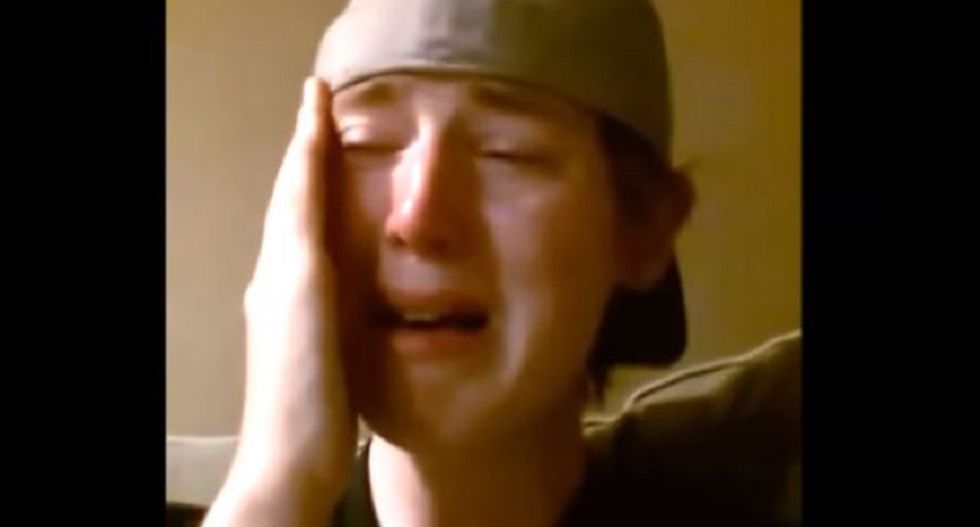 [Editor's Note: Based on early reports of this incident in other sources, a previous version of this story identified the victim as Danielle Jacobs --  a 24-year-old woman. Raw Story regrets the error.]

An Arizona man with Asperger's syndrome was shot dead by Mesa police on Thursday, the Arizona Republic reports.

The man has been identified as Kayden Clarke, 24. Clarke was suicidal and called two friends to come pick up his service dog. Those people called police, who in turn responded to the home and shot Jacobs.

"She [sic] stated she had a knife and was going to try and hurt herself," a police spokesman who misgendered Clarke told the Republic. "When officers approached the area inside the house where she [sic] was, she came at both officers with the knife and they fired their duty weapons and the female [sic] was injured.'

Clarke was treated at the scene and taken to a hospital, where he succumbed to his injuries.

Heather Allen, president of HALO, an animal rescue group, said Clarke emailed her the night before the incident, distraught, and hoping she would take care of his service dog, Samson, "if anything happened to her."

"This morning she emailed me again and told me by the time I read it, it would be too late, and asked me to please make sure that I got her dog and took care of her dog," Allen told AzFamily. "So I tracked down her address and called the police, and they indicated they already had someone on the way down there. And the next I heard that she had been shot."

Clarke gained internet fame last year after he posted a heartbreaking video of himself having what he called a sobbing "melt down," where he can be seen hitting himself in the head. He is then comforted by his gentle Rottweiler service dog, Samson.

Other videos posted online show that Clarke was indeed extremely fragile. In another one, he sobs as he talks about trying to get into college with his disability, while Samson tries to comfort him. (Videos are posted below.) In that video, he says he's been suicidal most of his life and has tried "suicide-by-cop" in the past.

According to the New York Daily News, Clarke's mother is caring for Samson.

His mother, Stacia, told the Daily News there are questions being raised as to why police had to shoot Clarke.

“Before the police arrived she [sic] wasn’t posing a threat to the community at all,” Stacia told the Daily News. “And the police came into her own place. They shot and killed a 24-year-old autistic, mentally ill individual whom they had been familiar with and aware of her special needs.”

Watch the report from AzFamily here:

Watch the viral video of Clarke having a meltdown here:

Watch Jacobs describe trying to get into college here: