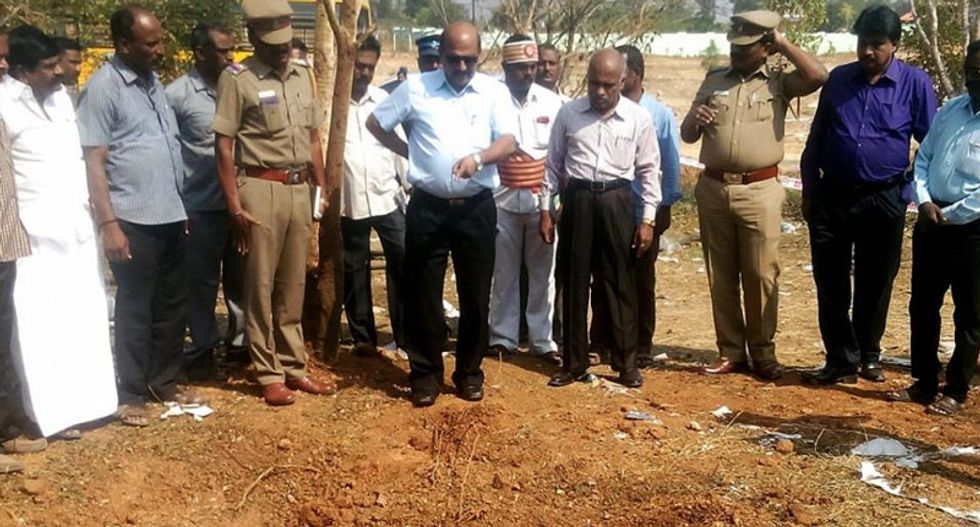 Indian scientists inspect the crash site of a suspected meteorite that landed in the Vellore district of Tamil Nadu state on February 6, 2016 (AFP Photo/)

Indian authorities say a falling object that killed a bus driver and injured three others was a meteorite. If proven, it would be the first such death in recorded history.

Experts said other explanations were possible for the incident Saturday in the southern state of Tamil Nadu.

The impact of the object left a five-foot-deep crater in the ground, according to the Times of India, and shattered window panes in a nearby building, killing the driver who was walking past.

The object weighed only 11 grammes, the newspaper added, about as heavy as a AAA battery.

Images in local media showed a blueish rock, which Tamil Nadu's Chief Minister Jayalalithaa Jayaram described as a "meteorite" -- although scientists say this has not yet been proved.

"A meteorite fell at a private engineering college... and claimed the life of a college bus driver," said the chief minister in a statement late Sunday, expressing "shock" at the news.

S. P. Rajaguru, assistant professor at the Indian Astrophysics Institute in Bangalore, said the rock could be a meteorite but further tests were needed.

If proven it would be the first meteorite death of a human in recorded history, he said.

"Most of the meteors never reach the earth surface as they completely vaporise in the atmosphere," he told AFP by phone.

"Hitting the Earth surface is very rare and there have been no deaths in recorded history."

Rajaguru said the missile could be debris from a rocket or a space shuttle.

Meteors are particles of dust and rock that usually burn up as they pass through the Earth's atmosphere.

Those that do not burn up completely, surviving the fall to Earth, are known as meteorites.