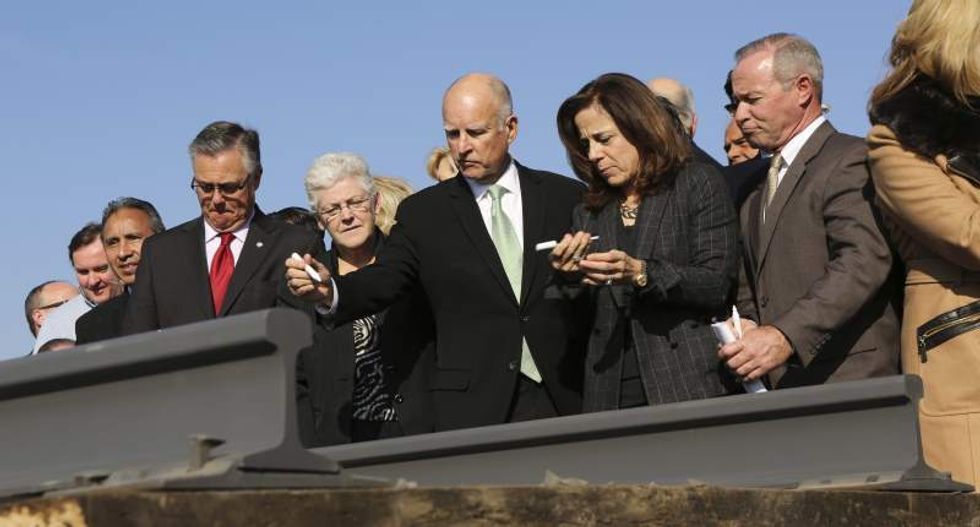 California Governor Jerry Brown (C) and his wife, Anne Gust, prepare to sign a railroad rail during a ceremony for the California High Speed Rail in Fresno, California in this Jan. 6, 2015, file photo. (Reuters/Robert Galbraith/Files)

California's ambitious plan for high-speed rail service will become reality within a decade with service between the state's agricultural Central Valley and high-tech Silicon Valley, state officials announced on Thursday.

In an updated draft plan for the rail line that will whisk passengers from Los Angeles to San Francisco in under three hours by 2029, the California High-Speed Rail Authority (CHSRA) revised downward the cost of the entire line, to $64.1 billion from nearly $68 billion.

The draft plan includes a new initiative to request $2.9 billion in additional funding from the federal government.

The first leg of the line would connect Kern County in the state's agricultural breadbasket to San Jose in Silicon Valley by 2025.

The state had previously said the first leg would run from Merced, in the heart of the Central Valley, to Burbank, in Los Angeles' San Fernando Valley, and would be completed by 2022.

The newly defined initial leg, estimated to cost $19.8 billion, would be covered by funds already available for the rail line. Additional federal funds, if secured, would help extend the initial leg south to Bakersfield.

"No other sequence works as quickly and as effectively," said Dan Richard, CHSRA board chair. "What we're talking about here is to do this in a way that is realistic, achievable, and fast. No one is getting left behind."

California’s project is one of a handful of high-speed trains planned in the United States, which has failed to keep pace with Europe and Asia, where such trains have become commonplace.

Of the U.S. plans, California's is considered the most ambitious - with travel speeds over 200 miles per hour - and the farthest along after breaking ground in 2014.

The project has captured attention from international firms, financiers and train manufacturers that view it as a foothold into a burgeoning high-speed rail market in the United States.

California would eventually tap private firms and investors to help cover roughly one-third of the total project cost. But first, the state must get an initial segment "up and running as quickly as possible" to prove ridership, said Richard.

"That is the fastest way to unlock the private sector investment," said Richard. "That then helps us build out the rest of the system."

The state has raised about $13.2 billion through state and federal funds, plus a pledge of cap-and-trade proceeds - funds paid by companies to offset carbon emissions.