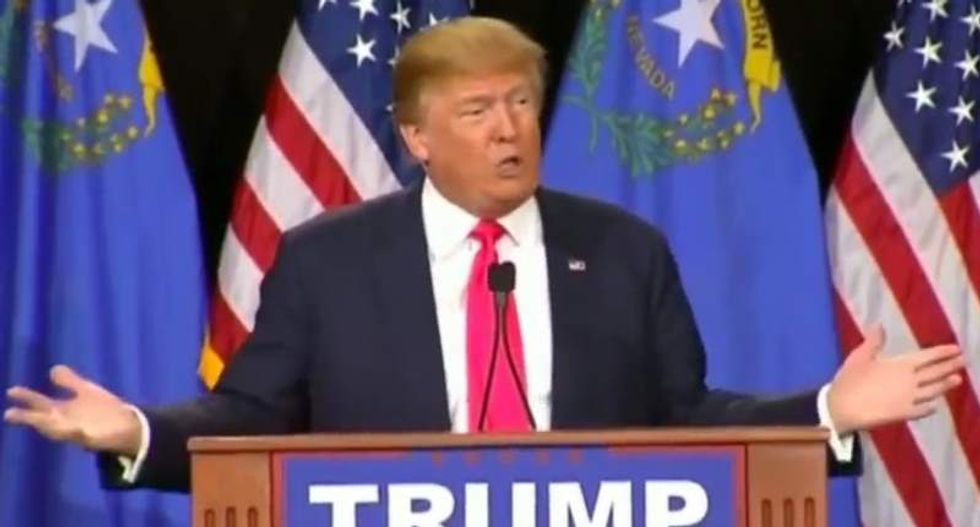 Donald Trump speaks to supporters during a rally in Las Vegas, Nevada on Jan. 21, 2016. (YouTube)

The Republican establishment’s nightmare scenario got one step closer to fruition in South Carolina on Saturday night.

Donald Trump won the South Carolina GOP primary in decisive fashion, carrying one-third of the vote in one of the most conservative states in the country. Florida Senator Marco Rubio and Texas Senator Ted Cruz lagged far behind, with each carrying only about 22 percent of the vote.

Trump’s victory in the Palmetto State gives him a commanding lead in the race for the Republican nomination. Indeed, if Trump can win South Carolina, he can win anywhere.

1. Trump is connecting with evangelical voters

One would not think that a foul-mouthed, thrice-married, New York billionaire and reality TV star would resonate with arch-conservative voters in the Deep South.

But in South Carolina on Saturday, that’s exactly what happened.

Trump carried most major GOP constituencies in South Carolina, including the two most important Republican demographics in the state: evangelical Christians and military veterans.

The key to Trump’s appeal resides in his relentless, biting and effective rhetorical attacks on the Washington establishment. At his theatrical and raucous campaign events, he makes GOP voters laugh, clap, boo and cheer as he condemns the nation’s leaders and promises to restore America to greatness.

Trump’s timing could not be better. Republicans voters are intensely pessimistic about the country’s future. Social conservatives in particular fear that the nation is in moral decline. For example, 63 percent of Republicans oppose the Supreme Court’s ruling in favor of same-sex marriage. Conservative pessimism has many other sources as well, including the violent chaos in the Middle East, the chronic nature of illegal immigration, the economic instability caused by globalization and deep-seated conservative hostility to America’s changing demographics.

The result is a toxic brew of fear and paranoia. A January 2016 CNN poll found that 88 percent of Republicans believe that America is headed in the wrong direction.

With a crisis-like atmosphere prevailing within the GOP, conservative and evangelical voters are far less interested in ideological consistency in their candidates than they have been in past elections. Convinced that America faces impending disaster, Republicans yearn for a strong leader to reverse what they perceive as the nation’s rapid decline.

The importance of Trump’s double-digit victory in South Carolina extends far beyond the 50 delegates at stake in the primary election.

Since 1980, the winner of the South Carolina GOP primary has won the GOP nomination in six of the last seven contested races.

That’s why South Carolina is considered a bellwether state for the South. The demographics of the South Carolina Republican Party – evangelical, Protestant, working-class and conservative – closely parallel those of states throughout the region.

The crucial “Super Tuesday” primary on March 1 is filled with states that resemble South Carolina, including Alabama, Arkansas, Georgia, Oklahoma, Tennessee and Texas.

Trump’s big win in South Carolina demonstrates unquestionably that his campaign resonates with southern Republicans. If he sweeps all or most of the southern states on March 1, his march to the Republican nomination will become unstoppable.

Since entering the presidential race, Ted Cruz has made clear that he will say or do anything to get conservative support.

To boost conservative turnout in Iowa, Cruz’s campaign sent out deceptively official-looking mailers that implied the recipients had broken the law by failing to vote in past elections. Then, minutes before the Iowa caucuses began, the Cruz campaign falsely claimed that Ben Carson was dropping out of the race. Cruz kept up his dirty tricks campaign in South Carolina, circulating a fake, photo-shopped picture of Marco Rubio shaking hands with President Obama.

In past elections, those unseemly tactics might have worked, but not this time around. In South Carolina both Trump and Rubio repeatedly called Cruz a cheater and a liar. The attacks drew blood because of Cruz’s long-standing reputation for arrogance and abrasiveness. Even his former boss, President George W. Bush, declared of Cruz: “I just don’t like the guy.”

The attacks on Cruz’s character clearly worked, because by any traditional measure the Texas senator should have won South Carolina. The son of an evangelical minister, Cruz asks voters to pray for him and conducts his campaign rallies like religious revival meetings with supporters waving Bibles in the air. Cruz’s heavy emphasis on religion made him a natural fit with South Carolina voters.

But the inconsistency between Cruz’s ostentatious displays of religiosity and his hardball political tactics finally caught up to him. As Trump put it at a South Carolina rally last week, Cruz “holds up the Bible and then he cheats.”

Evangelical voters constituted 72 percent of GOP voters on Saturday. If Cruz can muster only 22 percent support in South Carolina, he is unlikely to do better elsewhere.

4. Bush flopped on a historic scale

Former Florida Governor Jeb Bush finished in a distant fourth place with eight percent of the vote. In his South Carolina concession speech, he sadly announced that he was ending his presidential campaign.

Bush is one of the best-funded flops in presidential election history. In 2015 his campaign set an all-time record by raising over US$100 million in contributions in a six-month span. But all that money did not translate into votes.

Jeb never developed the compelling message and energetic charisma necessary to build a viable presidential campaign. He finished in sixth place in Iowa and fourth place in New Hampshire.

5. Delegate math is on Trump’s side

With the Nevada GOP caucuses on Tuesday and the key southern primaries following one week later, Trump is well-positioned to take an insurmountable lead in the delegate race.

The reason is because of a quirk in the GOP delegate rules. As Nate Cohn of The New York Times recently pointed out, the GOP’s complex delegate award process makes it possible for Trump to win a majority of delegates without winning a majority of the popular vote. As long as he keeps finishing in first in the primaries, he’ll pile up the delegates.

That is not good news for Trump’s GOP rivals. If they are going to stop him, they need to do it soon. Time is running out on everyone but Trump.