Fox host: Georgia's plan for school-sanctioned prayer 'drags us back to the era of sanity' 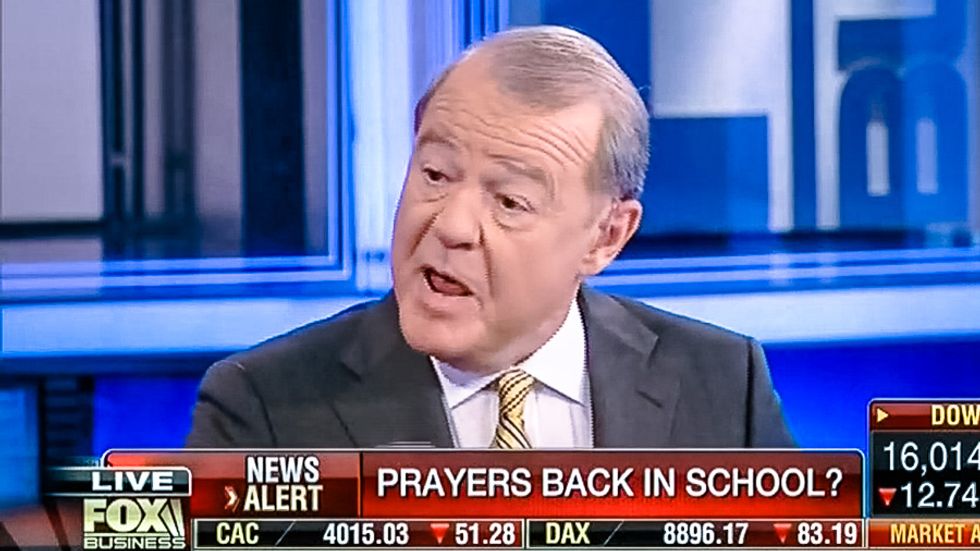 Fox Business host Stuart Varney praised Georgia lawmakers on Tuesday for bringing the state "back to the era of sanity" with a plan to legalize school-approved prayer.

Georgia House Bill 816 -- which is known as the Georgia Student Religious Liberties Act of 2016 -- aims to permit "religious activities or religious expression before, during, and after the school day."

Although civil libertarians have warned that the Supreme Court would likely strike down the measure if it becomes law, demonstrators rallied outside the state Capitol on Monday urging lawmakers to pass the bill.

“(In) 1962 the Supreme Court made this ruling and, what we've noticed since the Supreme Court ruling, there has been an increase in violence, murder, teen pregnancy, divorce rate,” Legislative Clergy Council spokesperson Sabrina McKenzie said. “If you don’t think prayer is the answer, then what is the answer?”

Varney lamented to judicial analyst Andrew Napolitano on the Tuesday edition of his Fox Business show that the Supreme Court would find the bill "profoundly unconstitutional."

"What we've done in America is we've gone too far in the other direction," Varney complained. "I have no problem whatsoever with a group of kids who want to hold Bible study on school property after school."

"The law is very, very clear," Napolitano pointed out. "The use of public assets for an openly, notoriously religious purpose is not permitted by the First Amendment."

"Suppose the Georgia law, which is probably going to be struck down, but maybe it drags us back to the era of sanity where you can mention Jesus in your classroom," Varney opined.

"You can mention that in a literary or artistic or historical way," Napolitano noted.

"A religious sense!" Varney shot back. "Come on!"

"The Supreme Court has said not on government property," Napolitano concluded. "And quite frankly, these people in Georgia should know that."

Watch the video below from Fox Business, broadcast Feb. 9, 2016.