Fox pundit claims blacks are 'over-represented' at Oscars: 'How many nominations' do you want? 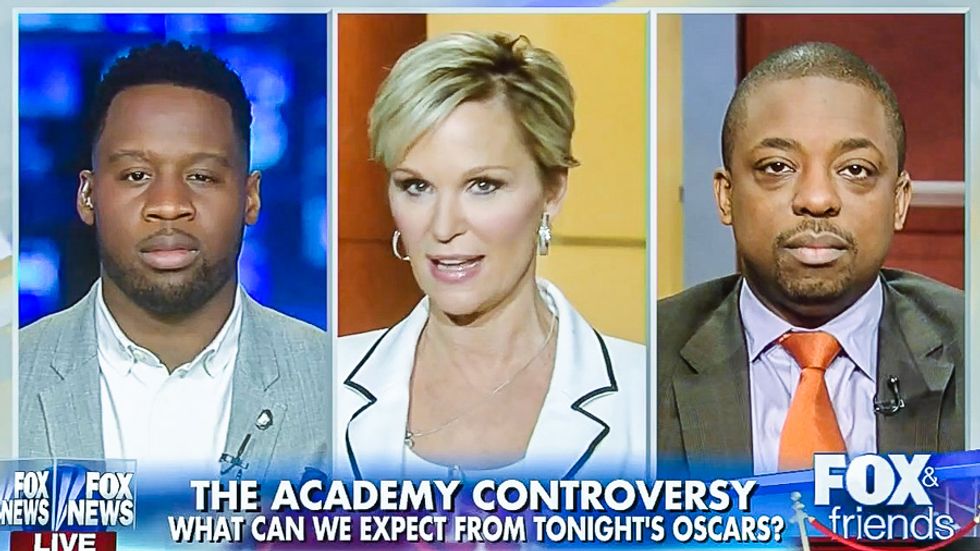 Fox News pundit Kmele Foster asserted on Sunday that black activists should not protest the lack of black nominees at Sunday's 60th Academy Awards because African-Americans had actually been over-represented in prior years.

After none of the top 20 nominees were black for the second year in a row, many called for a boycott of this year's ceremony with the #OscarsSoWhite Twitter hashtag.

But Foster told Fox News host Juliet Huddy on Sunday that planned protests by Al Sharpton and others were unnecessary because "blacks have been incredibly well represented" over the past decade.

"In fact, demographically speaking, they are over-represented in some nominating categories," he insisted. "There are folks like Will Smith, for example, who will be sitting this one out, who in past years has been nominated twice, which is far more than most actors in Hollywood."

"We ought to be asking questions to folks that are upset," Foster declared. "How many nominations would you prefer to have over the course of the last decade? What is fair? Is it fair to be demographically represented? Should you be represented to a degree that is twice your share of the population?"

Democratic strategist Brian Benjamin pointed out that the larger problem was the diversity of the Academy, which is responsible for nominating actors.

"Even the Academy acknowledges this and I'm not sure why you keep fighting this," Benjamin said. "They have made those steps to do so and I think they should be commended for that. However, it's important to note that if you don't have a group of different people making these decisions, it's not necessarily fair for anybody."

"What do we mean when we say diversity?" Foster wondered. "The bottom line is that there is a great deal of diversity in terms of the nominations themselves. And if there wasn't actually a problem, if they were nominating a diverse group of people, I don't quite understand why we pretend that there seems to be [a problem]."