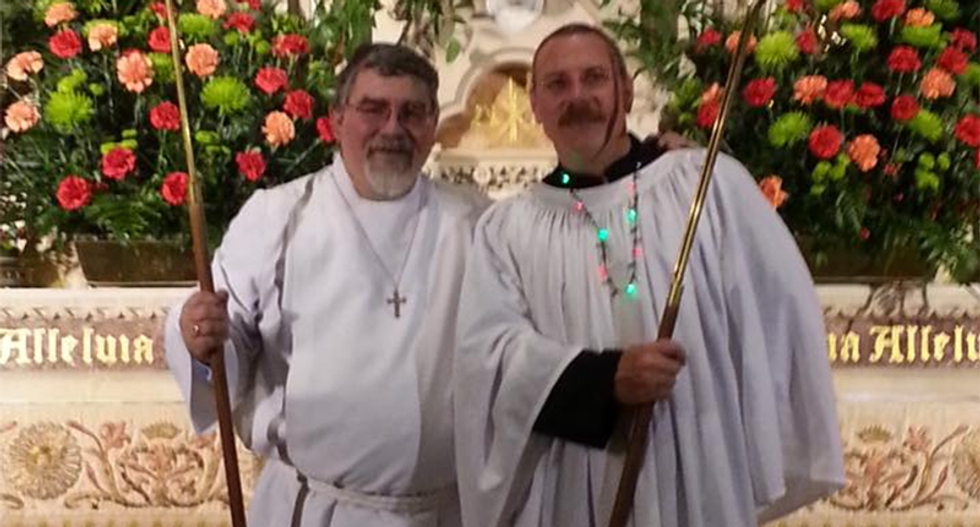 The Supreme Court may have decided that same-sex marriage should be legal, but other laws that discriminate against same-sex couples have struggled to catch up. The fear Democratic presidential candidates have spoken about is that a couple can marry on a weekend, post their photos to Facebook and be fired on Monday morning after being outed. That's nearly what happened to a beloved couple in Tennessee.

Dennis Clark and Mark Henderson both joined the Freemasons in 2007 because they valued the two requirements: a belief in a higher power and community service work. Clark told WKNOP that they both loved the idea of the fraternity of men coming together to do charity and community work.

Clark, is a corporate leadership trainer and Henderson is one of the county's deputy sheriffs. The two live together on a beautiful farm outside Memphis, but the local lodge they attend in town is one of the more liberal ones that sits in a progressive neighborhood.

When they got married just hours after the Supreme Court ruling, they posted photos of their wedding on Facebook. The Grand Lodge is the governing body of the state’s Freemasons. They eventually saw the photos and it wasn't long before charges were brought against the men for violating the constitution's penal code. The code requires that members not “engage in lewd conduct. To promote or engage in homosexual activity. To cohabit immorally in a situation without the benefit of marriage.” Only Tennessee and Florida Grand Lodge state chapters ban homosexuality.

Chris Hodapp, a Master Mason and author of Freemasons for Dummies explained that "overwhelmingly most Masons agree that what goes on in a Freemason’s bedroom is none of our business as a fraternity." But what happens behind closed doors in Tennessee falls under the purview of the regulating body of the Grand Lodge.

Understandably, such a stance causes problems with recruitment for the fraternity. "When a young man hears that Masons in a state are throwing gays out or have rules against them, they just see that as the whole organization doing that and not being isolated to a particular area," Hodapp explained.

Oddly enough the Freemasons were once a group that provided safety for those who held Enlightenment values. "It largely eliminated sectarian references and welcomed diversity. Because of that, it attracted prominent people and made an important intellectual contribution,” Paul Rich, a scholar of Freemasonry told WKNOP. "The Northern lodges are having difficulties being associated with all of this." But Enlightenment seems to have given way to sanctioned homophobia in Tennessee.

Last November the state chapter sent out a letter to all of the local groups reminding them of their policies and informed members that their Facebook pages would all be monitored for any "unauthorized discussion" on Clark and Henderson. They also threatened that if anyone is caught engaging in such activity it would "be considered a Masonic offense and will be dealt with accordingly,”

The problem seems to have caused enough of a stir to encourage action. Next month,  the state chapter will meet to elect a new Grand Master and vote on changes to the constitution including a proposed amendment to remove the ban on homosexuals as members.