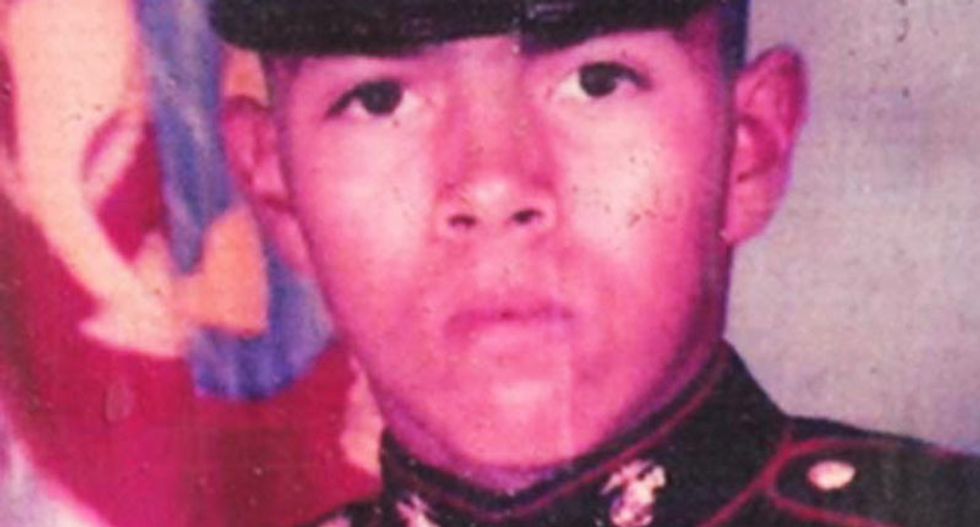 Testifying in a federal civil rights case involving the 2012 police shooting of a suicidal Marine veteran, the lone officer who didn’t discharge his weapon said there was no reason for four other officers to kill the man, reports the Fresno Bee.

Charles Salinas, a distraught veteran who called 911 claiming he had a gun and was going to shoot himself, was instead gunned down by three Fresno County law enforcement officers who shot at him 22 times -- striking him 11 times from 10-15 feet away -- because they felt their lives were in danger.

According to Fresno County sheriff’s Sgt. Joshua McCahill, who was at the scene but did not fire his weapon, Salinas should not have died that day.

According to McCahill he arrived at the scene to see Salinas sitting unarmed in a flower bed, talking to police officer Robert Pulkownik, who was holding a shotgun that shoots bean bags. The officer stated that Salinas never held a weapon or threatened officers, but was refusing to come out and surrender.

At one time Salinas reached behind a bush, and McCahill recalled he yelled, “Don’t do that. We don’t want to shoot you.”

Officers Boust, Little and Yambupah arrived at the scene and formed a line pointing their assault rifles at the vet who told them he didn't want them to to shoot him, asking McCahill to do it instead because he said, "He was having a bad day" and he wanted to die.

Refusing requests to surrender, Salinas made a sudden move causing McCahill to yell, Bag, bag, bag," meaning he wanted Pulkownik to use the less lethal bean bag gun. Instead the three other officer opened fire and killed Salinas.

According to both Boust and Little, the Marine vet ran toward them as he was being shot, however McCahill said that didn’t happen and that Salinas fell forward and landed face down on the pavement.

He added that the officers kept shooting at Salinas while he was on the ground, with one bullet striking Salinas’ head.

Asked why he didn't shoot, McCahill answered that he didn't fire because he regarded it as a “nonlethal situation.”

Watch the video below from the Fresno Bee: