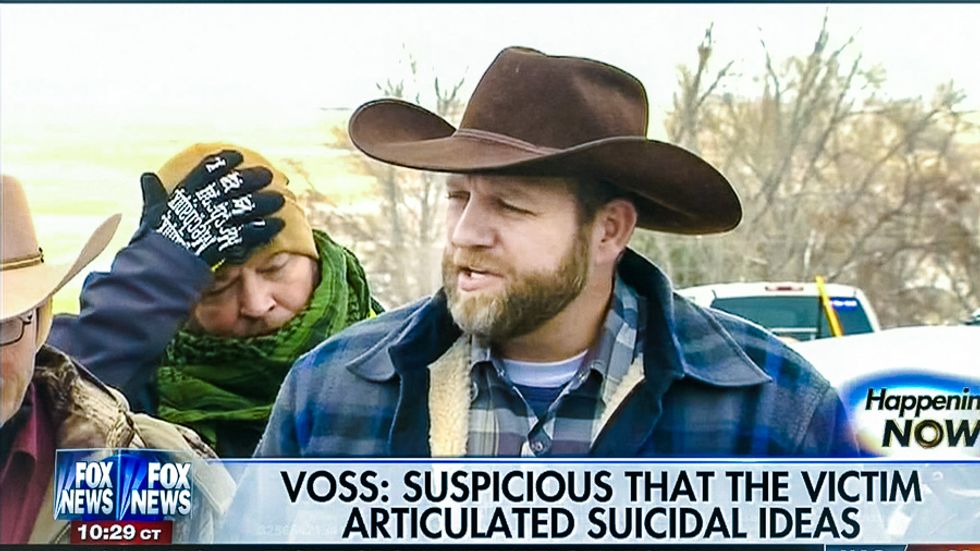 With only four holdouts left in the Malheur National Wildlife Refuge and 16 members of the Bundy militia having been charged with crimes, the FBI’s hands-off approach seems to have been successful.

The media has approved of and the FBI congratulated itself for the go-slow response as preferable to the all-guns-blazing methods used in Ruby Ridge and Waco in the early 1990s that inflamed the radical right. Granted, the death of spokesman LaVoy Finnicum has created a new martyr for the "patriot" and militia movements, but the operation did not end in a massacre as many feared.

It’s a mistake, however, to conclude the police and legal strategy is a success that should be emulated.

David Neiwert, author of In God's Country: The Patriot Movement and the Pacific Northwest, argues the Malheur takeover was encouraged by the government failure to prosecute the Bundys following an armed standoff involving the Nevada ranch of their father, Cliven Bundy, in 2014. This emboldened the Bundy bunch to provoke new confrontations with the government in Utah, Oregon and Montana over land-use issues.

Given free rein, the Bundys kept at it until they hit the jackpot Jan. 2 by seizing the Malheur Refuge. That gave them the national media attention they desired to fuel their movement. (That conflict actually began in October, when militia members paid an intimidating visit to the Harney County sheriff.)

Neiwert told the Raw Story now that Bundy militia members have been indicted, it indicates the feds “are not putting up with these guys committing federal felonies in everybody's face and then walking free.” A series of charges were unsealed on Feb. 3 -- including threatening violence, recruiting co-conspirators, trespassing on federal property, possession of firearms on a federal facility and conspiring “to prevent by force, intimidation, and threats” government employees from discharging their duties.

Nonetheless, the government was remarkably lenient toward the Bundys and allied militias prior to this, belying the right’s cries of tyranny. Neiwert says, “The federal government's light-handed response both in Oregon and Nevada has actually fueled the spread of patriot movement ideology, particularly in the rural West.” The lax approach for weeks at Malheur made Burns a magnet for armed militiamen who spread fear in the town. The refuge became a platform for the Bundy militia to promote its radical interpretation of the U.S. Constitution and organize their armed rebellion.

The Bundy episode also exposed how the legal framework of the “war on terror” is used primarily on racial, religious and political grounds. Anti-terrorism laws should be repealed, but it's notable that the Bundy militia’s actions match the definition of domestic terrorism precisely: “acts dangerous to human life that are a violation of the criminal laws of the United States or of any State” and that “appear to be intended … to influence the policy of a government by intimidation or coercion.”

The armed band has held the Malheur Refuge for more than a month now. The Bundys told reporters they would “kill or be killed if necessary.” They were setting up shadow governments in Eastern Oregon as a step toward overthrowing the U.S. government. Local and federal government employees were threatened. Most recently, Cliven Bundy sent the Harney County sheriff a notarized letter claiming “possession” of the refuge.

But there is no indication arrestees will be charged with domestic terrorism or that the scores of people who came by the refuge offering supplies or aid will be charged with providing material support for terrorism. Prosecutors may fear inflaming right-wing opinion, or it may be a calculation that no jury would equate rugged all-American cowboys with the beards, brown skin and burqas commonly associated with terrorism.

While more charges may be in the works, the conspiracy charge carries a maximum six-year prison sentence. Compare that to sentencing guidelines for terrorism, which can start at a minimum term of 17.5 years.

The Bundys are also being spared the throw-the-book-at-them response prosecutors use in post-9/11 terror cases. The contrast is telling because whereas the Bundys plotted actively and openly to use violence to further political ends, the majority of terror cases are cooked up by the FBI. They trap “mentally ill or … economically desperate” Muslim-Americans who wind up with decades-long sentences. Sometimes the charges are astonishingly minor, such as a U.S.-born college student who accepted a 15-year sentence, rather than the 70 years sought by prosecutors, by saying he knew a houseguest was carrying sleeping bags and waterproof socks to an al Qaeda contact in Afghanistan. This severity also extended to Occupy Wall Street. In Cleveland and Chicago, white male anarchists received lengthy sentences after they were goaded, bribed and guided by undercover police and FBI informants to participate in fake terror plots.

There’s also the question of why the police and FBI did not act right away. There are many options between doing nothing and sending in the tanks. Reporters and militia supporters on scene the day of the takeover say there were at most a dozen militants present, and police could have cordoned off the isolated refuge that day. Given that the FBI has since cut all the communications of the holdouts, doing this to the Bundys would have starved them of media attention. With no megaphone and no site to visit, patriots and militiamen would have lost a rallying point.

It also would have spared Burns from being flooded by militants, some of whom are still there, and prevented much of the tension that has torn apart the community. The Harney County courthouse was turned into a fortified command center with fencing, earthen berms, and concrete barriers. The county judge, local sheriff and his family received anonymous death threats.

The government timidity also emboldens extremists to assault, threaten and intimidate employees of the Bureau of Land Management, National Forest Service and Fish and Wildlife Service. Over a 20-year period there were more than 400 “violent incidents” recorded against BLM employees. That looks to be a significant undercount, as it does not include threats against BLM employees during and after the Bundy ranch standoff in 2014. Rather than confront these attacks, higher-ups often tell employees to remove insignias and hide their government status.

The losers, says Neiwert, include “legitimate users of the land in the West,” such as conservationists and the majority of ranchers who have good working relationships with the BLM and Forest Service. “They're leaving those folks hung out to dry, especially as the patriots' alternative universe expands with fresh recruits.”

That is most ominous. With little interference, militias and radical-right groups with violent agendas are deepening their connections. As opposed to similar rebellions in the West a few decades ago, there is more coordination between the land-use movement, patriots, militias, local elected officials and sheriffs. And in the background is a Koch Brothers-funded outfit, the American Lands Council, which is pushing a privatization scheme whereby federal lands would be ceded to Western states that would then lease it to timber, mining, cattle and energy interests.

Advocates for opening the West to plunder find a receptive audience in rural areas because there are legitimate concerns about dying communities, shrinking tax bases and few good-paying jobs. A police and prosecution strategy alone will not dampen the rebellion, but turning a blind eye only means the embers of rebellion will eventually blaze into another firestorm—like the one the Bundys ignited this time.

Arun Gupta contributes to The Washington Post, YES! Magazine, In These Times, The Progressive, Telesur, and The Nation. He is author of the forthcoming, Bacon as a Weapon of Mass Destruction: A Junk-Food Loving Chef’s Inquiry into Taste, from The New Press. Follow him @arunindy or email at arun_dot_indypendent_at_gmail_dot_com.