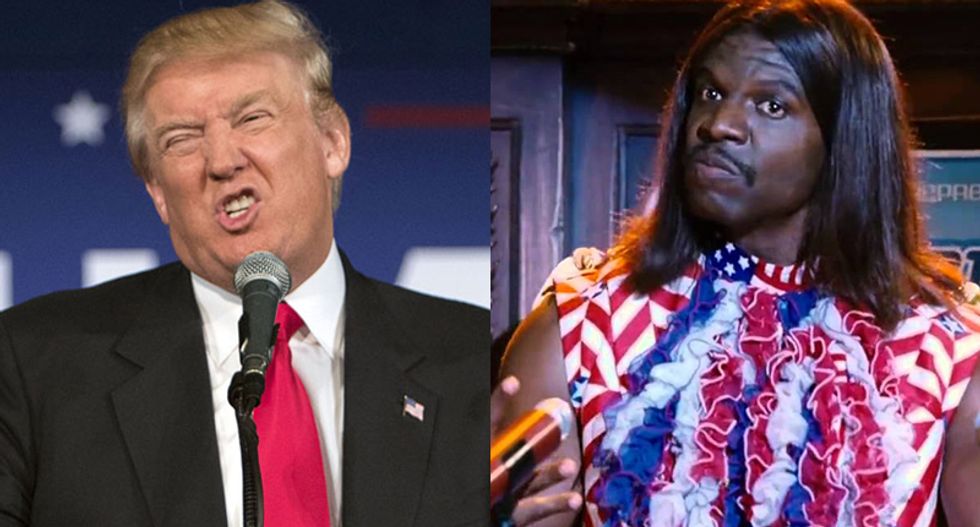 It's not hard to imagine that Etan Cohen's statement on Monday that his film Idiocracy had gone from satire to "a documentary" within a decade was directed at least in part toward the ascension of Donald Trump to the lead among Republican presidential contenders.

After all, as Flavorwire noted last year, it can be hard to distinguish at times between the real estate mogul and the movie's boisterous -- and belligerent -- President Dwayne Elizondo Mountain Dew Herbert Camacho.

That trend showed no signs of slowing down this month, even as Trump cruised to victory in three GOP contests, going by the incidents listed below.

1. "I love the poorly educated"

Trump no doubt meant this to sound like a message of acceptance in the wake of his victory in the party's Republican caucus on Tuesday, but critics seized on the remark as a crystallization of both his campaign and his target demographic, considering that a survey of his fans in South Carolina revealed more than a little support for banning not just Muslims, but LGBT community members from entering the US.

Trump has made a point during his campaign of presenting himself as a man of faith, only to be called out by no less than the pontiff, who criticized his oft-repeated threat of building a wall at the US-Mexico border, saying, "This is not the gospel."

The magnate quickly lashed out with a bizarre threat involving the Islamic State terrorist group: "If and when the Vatican is attacked by ISIS, which as everyone knows is ISIS’s ultimate trophy, I can promise you that the Pope would have only wished and prayed that Donald Trump would have been President because this would not have happened."

3. "I'd bring back a hell of a lot worse than waterboarding"

Republican candidates have been criticized in the past for either invoking or trying to imitate action hero Jack Bauer, whose penchant for torture was treated as valid on Fox's 24. Trump fell right in with that tradition during a GOP debate in New Hampshire, boasting, "I would bring back waterboarding and I’d bring back a hell of a lot worse than waterboarding," ignoring evidence proving that it fails to yield any solid evidence.

In the wake of that remark, Trump went on to sarcastically scold a supporter who called Sen. Ted Cruz (R-TX) "a p*ssy" for not going as far with his rhetoric -- and then repeated the insult.

Last Friday, Trump sought to portray himself as being willing to aggressively pursue terrorists by repeating a story about US Gen. John Pershing allegedly going to extreme lengths to not only execute, but humiliate Muslim prisoners.

"He took 50 bullets, and he dipped them in pig’s blood," he said. "And he had his men load his rifles and he lined up the 50 people, and they shot 49 of those people. And the 50th person he said ‘You go back to your people and you tell them what happened.’"

While it sounded "tough," the story was also undeniably false. As History News Network reported, Pershing did not carry out the grisly execution Trump attributed to him. Moreover, Pershing's actual policy stances likely ran counter to Trump's:

After the First World War Pershing teamed up with Herbert Hoover to raise funds to feed hungry children in Europe. Hoover and Pershing co-hosted’ “invisible guest” fundraising dinners. They would place an empty setting at the table, representing the starving children. Why can’t we hear that Pershing story at campaign rallies instead of a false and violent one?

If Pershing were around today he would be advocating food for the hungry child refugees, which are at unprecedented levels today because of the war in Syria. They never talk about hunger during the presidential debates, but it’s a top foreign policy issue, which Pershing and other great leaders have understood. Pershing was also deeply concerned about high levels of military spending. He often spoke about achieving global arms reductions and disarmament. Nations could work together to achieve this noble goal.

Trump's speeches have been targeted by protesters for the majority of his campaign -- and the protesters often targeted for violence by his supporters.

Which made it especially disturbing to hear him respond to a heckler earlier this week by saying, "I'd like to punch him in the face."

Of course, anyone who saw Trump "fight" WWE's Vince McMahon at Wrestlemania 23 might question how scared that heckler should be, as seen here:

Perhaps no moment this month illustrated the unpredictability of Trump's campaign as his decision on Tuesday to give an impromptu speech during an event for Cruz -- hosted by Glenn Beck, no less.

As Salon noted, the interruption left Beck -- who has made no secret of his disdain for Trump -- incensed enough to call his supporters "brown shirts," a direct comparison to the Nazis.