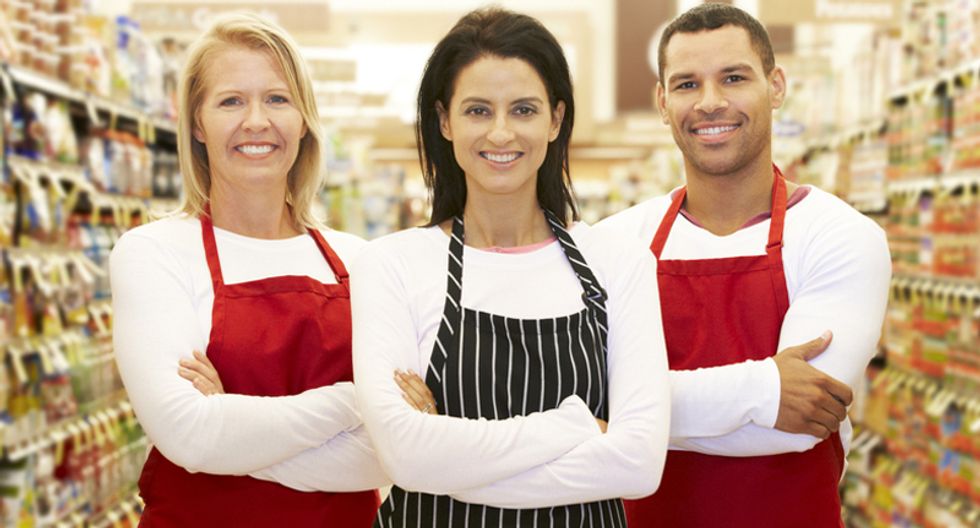 Walmart is giving more than one million of its employees a raise later this month as part of a plan that will lift all but its newest hires to at least US$10 an hour.

The move, first announced last year, follows an aggressive campaign to get the largest private employer in the U.S. to lift worker wages and coincides with a nationwide push to raise federal and state minimum wages and a prolonged period of little growth in pay.

While Walmart’s decision is at least in part a result of that pressure, it’s still the action of a private company to revamp its own wage policies, as opposed to the result of a government forcing it to lift worker pay. Proponents of requiring just that argue raising the minimum helps reduce inequality. Critics contend it can actually worsen it by driving up unemployment and weakening economy-wide labor market flexibility by raising the costs firms face.

So what does the economic research say about the impact of minimum wages on income inequality and is there a better way to reduce it?

Many of the articles in the mainstream press promoting minimum wages are incompatible with basic economic principles.

The first fallacy is that changes in the minimum wage do not affect the behavioral response among firms and individuals. The second fallacy is that higher wages will force companies to innovate in order to reduce costs. Both these arguments overlook some very basic, but informative, economic principles.

The first overlooks the fact that wages are designed to compensate workers for productivity. When wages are distorted, they affect the profit-maximizing decisions that businesses make. The textbook prediction, which is generally supported in the data, is that higher minimum wages reduce employment since companies restrict the number of workers they will hire. These adverse effects are especially likely given the pace of technological change and automation.

The second overlooks the fact that there are effective and ineffective ways to stimulate innovation among businesses. The idea that making hiring more costly will spur innovation is tantamount to requiring companies to reduce the size of their physical presence so they become more productive. While these types of distortions may prompt a small fraction of companies to innovate, misallocation more generally is a major factor behind cross-country differences in productivity.

Protests like these may have helped persuade Walmart to raise wages.

Nonetheless, economists themselves have debated how minimum wages affect employer decisions for many years.

In 1994, economists David Card and Alan Krueger were the first to provide some evidence that such effects may be small. But more recently, a consensus has generally emerged that changes to minimum wages have strong effects on jobs growth.

How minimum wages affect inequality, however, remains controversial. Detecting it with standard statistical methods is very challenging because their full effects are constantly changing and require data on both individuals and companies.

Back in 1999, Princeton economist David Lee used the Consumer Population Survey (CPS) from 1979 to 1989 to argue that the declining purchasing power of the minimum wage largely explains why inequality surged in the 1980s.

Other new research, however, has put that conclusion in doubt. Perhaps the most conclusive reassessment comes from economists David Autor, Alan Manning and Christopher Smith earlier this year. Using many more years of microdata from the CPS, as well as a different statistical approach, they found that the minimum wage explains at most 30 percent to 40 percent of the rise in wage inequality among the lowest earners.

Since economists had thought that changes in the minimum wage could explain as much as 90 percent of the shift in inequality, these new estimates are important.

While the extent is still uncertain, it’s clear that the minimum wage and other wage-setting forces such as tax rates and union bargaining power do in fact affect inequality and the labor market.

My own ongoing research, which focuses on the link between such wage-setting mechanisms and company behavior, suggests labor-market distortions like raising the minimum wage can have other negative effects on workers, businesses and inequality beyond the overall impact on employment.

The first adverse effect concerns how much people work. If, for example, worker wages rise due to a government mandate, the employer may reduce the number of hours staff work, leading to lower paychecks even after the raise. That’s part of the reason why we’ve seen companies like McDonald’s increasingly try to automate tasks that were once held by people.

In addition, my research suggests one of the major ways people acquire new skills is by spending more time at work. Thus policies that lead to fewer hours could lower employees' ability to improve their long-run earnings potential.

The second is an indirect effect on the way businesses invest in workers and design compensation and organizational policies. When companies are forced to pay higher wages, they may offset the cost by reducing how much they invest in workers. There is evidence that minimum wage laws have this effect.

Put simply, if a recession comes and an individual loses his or her job, having more skills makes it easier to find a new position and return to the previous income level.

Even setting aside all the plausible economic arguments against the minimum wage, under the best case scenario, what does it really achieve?

If the average full-time employee works 1,700 hours per year, then moving from $7.25 an hour to $9 an hour produces only about $2,975 in additional annual earnings. While some may argue that something is better than nothing, this would be at best a marginal solution to inequality.

Taking a look at the most recent 2015 Current Population Survey data and restrict the sample to full-time earners with over $10,000 earnings per year, Americans at the 90th income percentile (they earn more than 90 percent of their compatriots, or $80,000 a year) make 5.6 times as much, on average, as those at the 10th percentile ($14,200). Increasing the minimum wage to $9 an hour would put the ratio around 4.65.

In other words, even in the best of worlds – where the minimum wage has no unintended side effects – it appears to only marginally reduce inequality.

Alternatives to raising the minimum wage

Where does this leave us in trying to reduce inequality?

First, companies are welcome to raise wages at any time they want. And letting them do so may be more effective at reducing inequality than when they’re forced to because it avoids the adverse consequences such as reducing hours.

Businesses are well aware of their marginal costs and benefits – how much it costs to produce an additional unit of output versus the incremental gain. When governments set uniform wage regulations, they require all companies – each with their own and distinct marginal costs and benefits – to abide by the same rules. In contrast, when companies decide to change their own pay practices – as Walmart is doing – they do so in a more efficient way.

Second, as Stanford economist John Cochrane has remarked, instead of addressing the short-term problem of low wages, governments and companies can address the more structural problem: a lack of skills.

Companies and local governments can provide training programs and support for additional education, such as through community colleges, in order to equip workers with additional skills that translate into meaningful value for their companies. Investing in worker skills can lead to increased employee productivity and creativity, which in turn translates into sustained higher wages. And these benefits have broad spillover effects throughout the labor market and make sustainable gains in narrowing the gap between the richest and the poorest.

While the economic effects of minimum wage laws are very complex and a subject of scrutiny within the economics community, there are much better ways to deal with systematic challenges in the labor market. Getting more people to work, reducing the barriers for businesses to hire and encouraging the accumulation of new skills are all strategies for promoting sustainable long-term growth in wages.

Some Uvalde citizens are not surprised by criticism of the police  — because of the department's history: report

There is outrage and heartache in Uvalde as new reporting shows that lives may have been saved had law enforcement in Texas not waited so long to confront the school shooter.

MSNBC's Jonathan Capehart broke down the latest in the timeline of the shooting.

21 lives lost: Uvalde victims were a cross-section of a small, mostly Latino town in South Texas

One boy brewed his grandparents a pot of coffee every morning. One girl wanted to be a marine biologist. One teacher had been married for 24 years to her high school sweetheart.

As summer vacation approached, their lives were abruptly cut short Tuesday by a gunman at Robb Elementary School in the mostly Latino town of Uvalde.