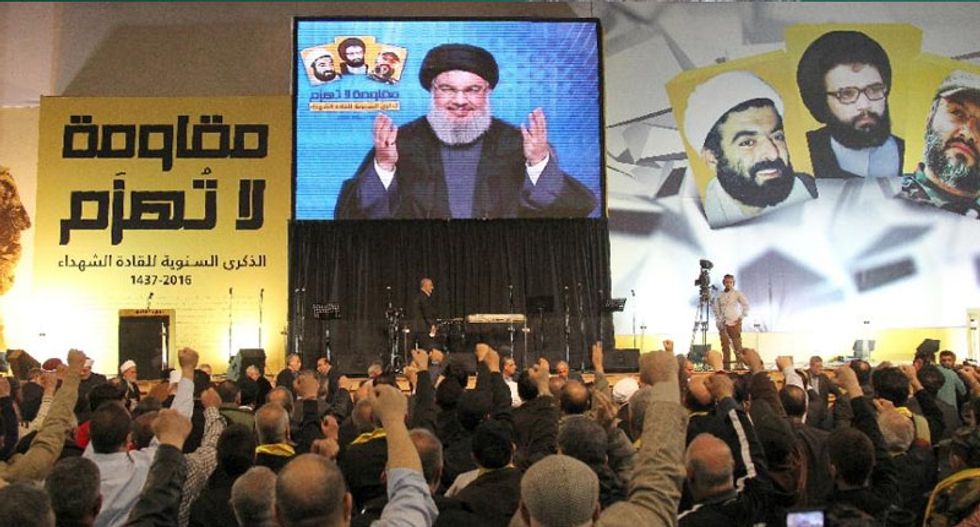 Hezbollah chief Hassan Nasrallah, seen on screen as he addresses the crowd in Beirut on February 16, 2016, said Turkey and Saudi Arabia "are not ready to accept a political solution" in Syria (AFP Photo/Anwar Amro)

Hezbollah chief Hassan Nasrallah on Tuesday accused Ankara and Riyadh of dragging the entire region into war and said "victory" was imminent for his Shiite Lebanese group and its Syrian regime allies.

"They (Turkey and Saudi Arabia) are ready to drag the region into a war," Nasrallah said in a video address to supporters in the southern suburbs of Beirut, a Hezbollah bastion.

He said the two countries have been pushing to send in international ground forces because they "are not ready to accept a political solution to the conflict in Syria, which is why they want to continue the war and destroy it".

Nasrallah said Riyadh and Ankara planned to intervene directly because their allies "the Islamist rebels on the ground have suffered successive defeats" at the hands of Kurdish and Syrian regime forces.

"In the days ahead and for the decade to come... we will proclaim victory alongside the Syrian army," he said.

He also vowed "to prevent Daesh (Arabic acronym for the Islamic State group), Al-Nusra Front (the Syrian Al-Qaeda affiliate), America, Saudi Arabia, Turkey and their pawns from occupying Syria and Israel to realise their ambitions."

On Saturday, Turkey said that it could, alongside fellow international coalition member Saudi Arabia, mount a land operation against IS in Syria.

Syria's ally Iran, which has sent thousands of "military advisers" into Syria, warned Tuesday that the deployment of Saudi troops would violate "international law".