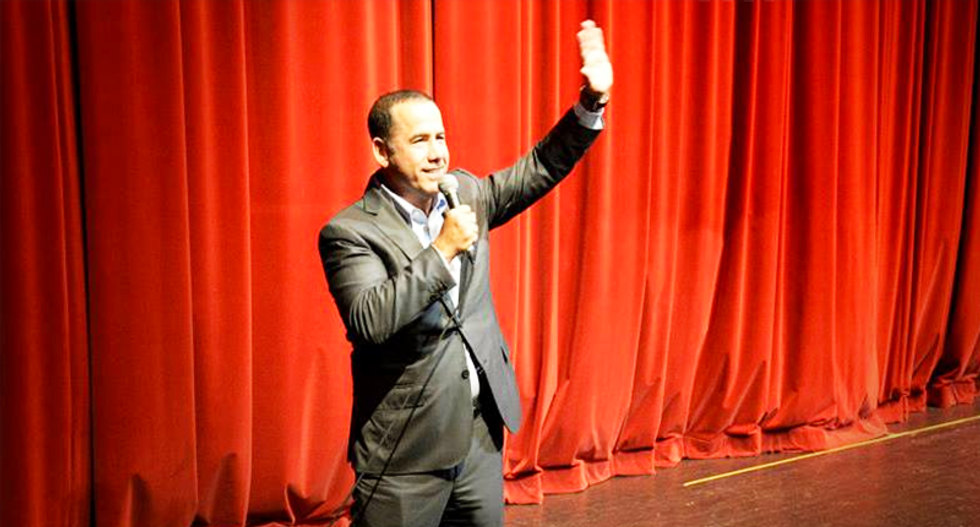 The candidates and their supporters and surrogates are out making their final pitches as Election Day rolls on in the "First in the Nation Primary" in New Hampshire today. One of the advocates for former Secretary of State Hillary Clinton is Miami Beach Mayor Philip Levine, the guy who rode around town on a kayak to warn people about the perils of climate change.

While stumping in the Granite State, Levine rallied supporters telling them that Clinton's poll numbers are going up and that she'll fight until the end. Then his pitch turned toward Senator Bernie Sanders and what Levine calls Sanders' socialist revolution:

When it comes to the 2 to 1 support from young voters for Sanders, Levine claims they're being swayed by an impractical campaign promise and he has adopted the talking point Republicans are using about people wanting "free stuff."

"Free education, free health care, let’s destroy Wall Street. Let’s have the middle-class pay for all of these free things," Levine rattled off. "I mean, I understand now. Senator Sanders is going to be offering free Uber, free Netflix, free Starbucks, after everything else. That’s part of an unrealistic message."

As a Florida mayor, Levine has been critical of Senator Marco Rubio who Levine referred to as "Marco Polo," though not because Rubio tends to echo himself, but due to Rubio's excessive absences from his job in the U.S. Senate. "He’s nowhere to be found and is just wandering all over the place,” Levine said. In an interview with Fox News's Tucker Carlson, Levine called Chris Christie "Toto" for pulling back the curtain on Rubio in the latest debate.