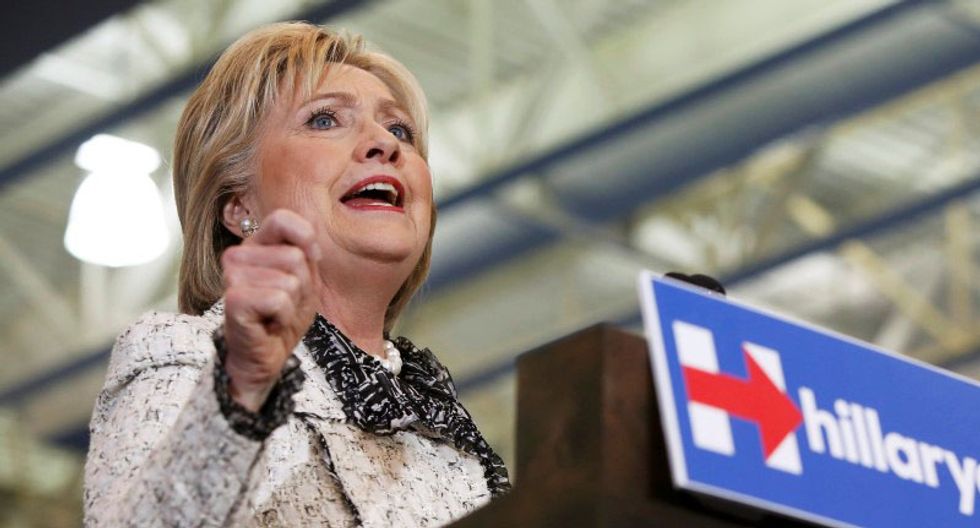 Fresh off a runaway win in the South Carolina primary, Democrat Hillary Clinton turned her sights to a possible match-up with Republican front-runner Donald Trump in the Nov. 8 presidential election.

Without mentioning Trump's name, the former secretary of state made it clear on Saturday she was already thinking about taking on the real estate mogul whose recent string of victories made him the favorite to be the Republican nominee for the White House race.

Clinton shot down Trump's campaign slogan of "Make America Great Again" and his plans to build a wall on the U.S.-Mexican border.

"Instead of building walls, we need to be tearing down barriers," said Clinton, who would be America's first woman president.

Clinton said she was not taking anything for granted after crushing Democratic rival Bernie Sanders on Saturday by 48 points and likely setting herself up for a good "Super Tuesday" night on March 1, a key date in the nomination battle.

But if Clinton and Trump win big on Tuesday as polls suggest, the chance of a general election match up between them increases, adding another twist to a presidential campaign that has defied convention as U.S. voters vent frustration over economic uncertainty, illegal immigration and national security threats.

A Trump-Clinton election would embody the outsider vs. establishment battle in American politics. Trump has never been elected to public office, while the former first lady has been a player in Washington for decades.

South Carolina Democratic voter Teri Faust, 59, said Clinton would be better able to take on Trump than Sanders, a U.S. senator from Vermont.

"Bernie wouldn't stand a chance against him. Hillary is strong," said Faust, who met Clinton when she came to her church two years ago and again on Clinton's first campaign trip to the state when she held a roundtable for minority women business owners.

South Carolina was Clinton's third victory in the first four Democratic contests, raising more questions about whether democratic socialist Sanders will be able to expand his support beyond his base of predominantly white liberals.

Exit polls showed Clinton winning big in the state with almost every constituency. She won 9 of every 10 black voters, as well as women, men, urban, suburban, rural, very liberal and conservative voters. Sanders was ahead among voters between ages 18 and 29, and among white men.

When asked which candidate they thought “can win in November,” an overwhelming 79 percent said Clinton, with only 21 percent putting their faith in Sanders to defeat the eventual Republican nominee.

Sanders, who has energized the party's liberal wing and brought young people to the polls by attacking income inequality and Wall Street excess, needs a breakthrough win in a key state in the next few weeks to keep his hopes alive.

"He's got to pull off a surprise against Clinton soon or he won't have time to recover," said Phil Noble, a longtime Democratic activist in South Carolina.

He said Sanders' momentum in South Carolina "fell off the table" after Clinton's solid victory in Nevada on Feb. 20.

In the Republican race, Trump and rival Marco Rubio accelerated their political slugfest on Saturday during dueling appearances in Arkansas and Georgia.

"The majority of Republican voters do not want Donald Trump to be our nominee, and ... they are going to support whoever is left standing that is fighting against him to ensure that we do not nominate a con artist," Rubio told reporters in Georgia.

Trump, speaking in front of his private plane in Arkansas, belittled Rubio and accused the first-term U.S. senator from Florida of being fresh.

"I watched this lightweight Rubio, total lightweight, little mouth on him, 'bing, bing, bing' ... and his new attack is he calls me a con artist," Trump said. "The last thing I am is a con man."