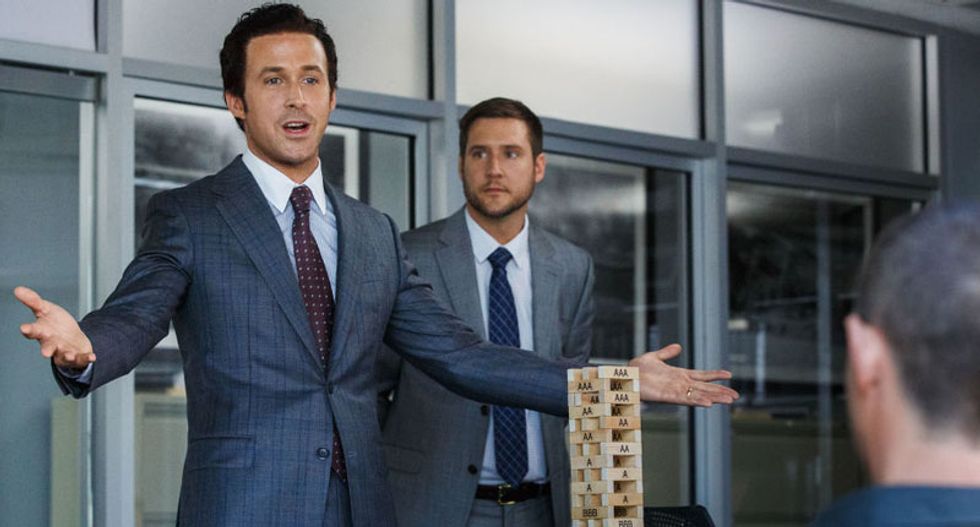 One of the contenders for best picture at the Oscars is The Big Short, the saga of just how we merrily raced off the side of a financial cliff in the years leading up to 2007.

The movie somehow manages to make entertaining the insanity behind both the housing bubble and the golden years on Wall Street that accompanied it. It chronicles how a few naysayers saw the writing on the wall, recognized that the frenzy of lending to sub-prime borrowers likely would come to a grisly end, and bet against the trend, massively.

Even as the film’s stars and producers prepare to walk down the red carpet, however, worries of a new real estate bubble are mounting.

Whatever is waiting to pounce will not be close, though, to what we witnessed in 2007. The New York Fed’s quarterly report on household debt and credit noted that mortgage debt remained essentially flat in the last three years, and has fallen as a share of total debt, from nearly 80% in 2008, at the height of the subprime meltdown, to only 72% as of the end of 2015.

Confirmation comes from the banks. Mortgage originations have remained flat and underwriting standards are tougher, even though banks sometimes gripe about the impact that is having on their bottom line.

In other words, we’ve behaved ourselves so far – or else, the banks have been forcing us to behave.

But will that continue? What pressures exist for this state of affairs to change?

Quicken – one of a number of “nonbank” lenders that are increasingly dominating the mortgage-lending space – raised many eyebrows with the Super Bowl ad for its Rocket mortgage . The product’s name hints at the speed with which Quicken promises to line up your finances: as rapidly as eight minutes, if all your documentation is in order. It’s not that they will violate lending standards, the lender insists: it’s just that they want to make it easier for qualified lenders to jump through the hoops.

Making the whole process easier is the mantra that Bank of America has adopted with its new product, Affordable Loan Solution , that requires buyers to put down only 3% of the value of a home and still qualify for a mortgage of as much as $417,000. The bank’s PR team has gone to immense pains to point out that these won’t be like the infamous “liar loans” of yore. Indeed, every application will be handled by real people, not just automated systems, meaning that humans will be analyzing and judging the finances of every low-income applicant (who will have to have good credit scores to qualify).

“It’s different this time” is the refrain that we’re starting to hear a lot in the mortgage business. Equifax noted that $50.7bn of new subprime mortgages were underwritten in the first 10 months of 2015, a 28% in the number of loans originated and a 45% increase in the balances . But don’t worry, the lenders are focusing more on the ability to repay.

Fitch Ratings has already sounded some warning bells , based on the prediction that the Federal Reserve will continue to raise interest rates this year, and that those rate hikes will push mortgage rates higher. That, in turn, will give mortgage lenders an incentive “to broaden loan eligibility requirements, as refinance volume is likely to dry up”.

Translation: as the low-hanging fruit – the customers with the good credit scores, the good incomes and disciplined payment histories, or those who need to refinance – vanish, the lenders will still need to generate new business. They will have every reason to push the envelope on factors like credit quality.

These lenders already are under financial pressure to make mortgage lending more profitable – perhaps by cutting personnel costs, one of the biggest expenses they face. And what do those personnel do? If that were to happen, it would be bad news, since those personnel are the folks who do the due diligence on the mortgage loans.

Then there is the fact that some urban markets – San Francisco and the Silicon Valley area – already look dangerously overvalued by any standard. Zillow.com has pegged the rise in median property values in San Francisco over the last three years at 67%, a surge that can’t be traced to anything but speculation.

Even nationwide, some contrarians argue that the affordability crunch that many homebuyers experience – when they discover that renting makes financial sense because the average house price is simply too high – is part of a real bubble. Mark Hanson, who may yet end up as the voice of the Big Short version 2.0, has been preaching that a wave of all-cash buyers, or what he refers to as “ unorthodox demand with unorthodox capital ” has inflated valuations by anywhere from 25% to 60%.

Even imagining what might happen to some of these new borrowers who have put 3% down on a $400,000 house, if the value of that house falls by even 10%, gives me a headache. They could have the cleanest credit in the world, and the most stable jobs, and their lender would still have a panic attack.

And that is assuming that nothing else goes wrong: that there are no job losses, that the lender hasn’t pushed the envelope in terms of the lending criteria, or hasn’t decided to return to some of those quirkily structured loans to convince people who otherwise might not buy to consider it – a 0% teaser rate, say, followed by a floating rate?

That brings us to the intentions of home buyers and mortgage borrowers themselves: always the wild card.

loanDepot, one of the emerging lenders in the nonbank mortgage and non-mortgage home loan space, recently surveyed American homeowners. It found them even more optimistic than they had expected about the value of their homes. The extent to which the subprime crisis of 2007-2008 failed to make them more conservative about tapping into their home equity took even the folks at loanDepot by surprise.

It appears that nearly half of Americans with mortgages expect the value of their home to rise this year; 85% predict that it will rise at least 10%. (loanDepot notes, carefully, that industry experts are forecasting a gain of less than half of that.)

Newer buyers are the most optimistic of all when it comes to price gains, but they may be more wary about taking out loans against any equity in their home. But only 14% said the crisis made them more conservative about taking out a home equity loan, and nearly 6% said they didn’t believe having a high level of equity in their home would protect them in the event of a crash, anyway.

If we manage to avoid a repeat of the events chronicled in The Big Short, it will be because some kind of rationality surfaces, and stops us all – bankers, home lenders and home buyers alike – from behaving like reckless lemmings ready to dash off the edge of the next financial cliff.

There are no bright lights and arrows flashing now, pointing straight at the next crisis; merely some indicators of behavior patterns that, if they continue in the same direction and are sustained over time, could lead us in the wrong direction.

It’s good to ensure that homes become more affordable and mortgage financing more accessible. What’s not so good is to have someone with a low income buy a property in an area where real estate prices have soared in the last four or five years, with a minimal down payment, just in the name of that goal. Or for a bank, desperately trying to bolster its profits, relax its standards and structure a mortgage product that will only work out for, say, 75% of its borrowers.

History probably won’t repeat itself, but the echo alone could be deeply unpleasant.